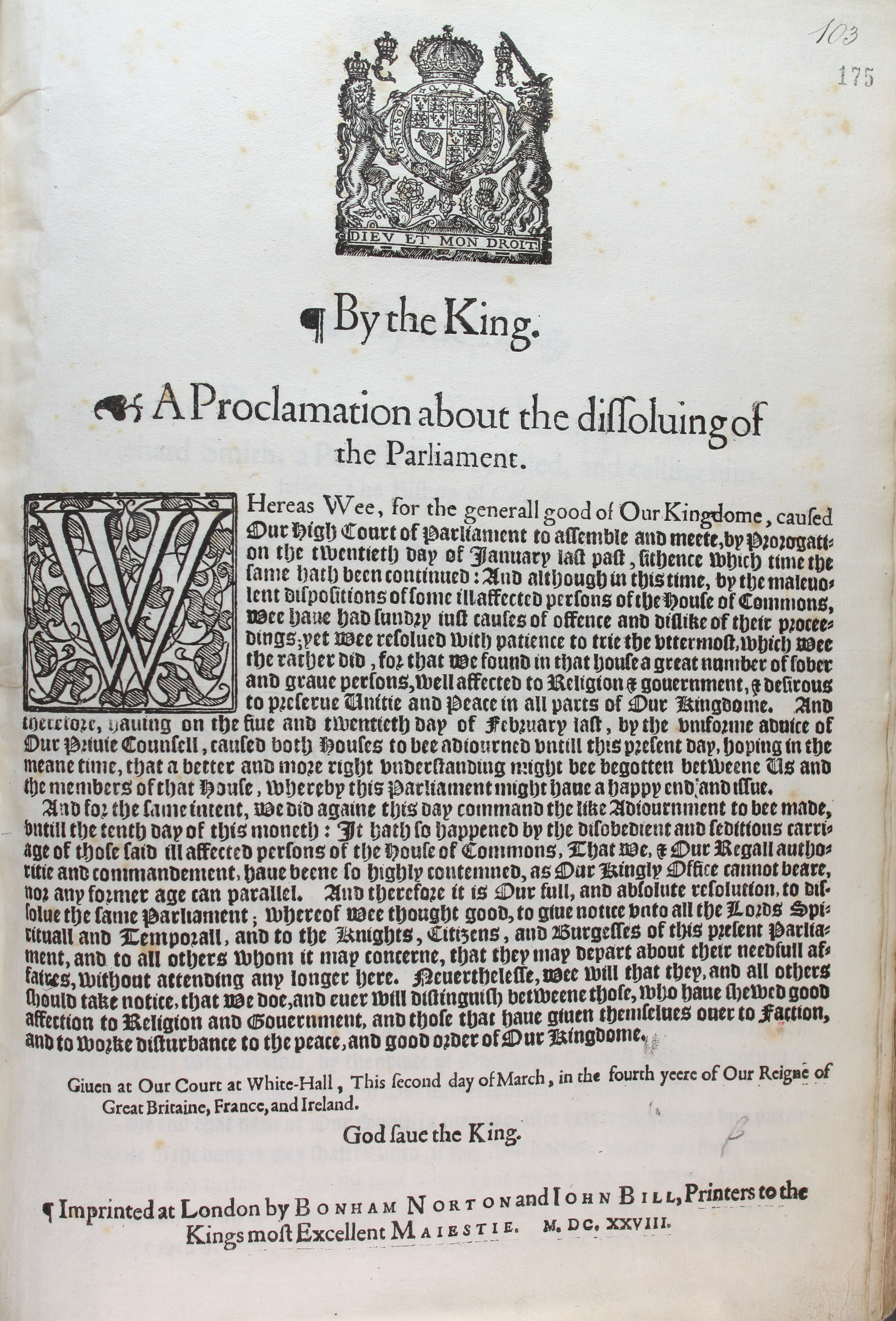 A Proclamation about the dissolving of the Parliament.

Whereas we, for the general good of Our Kingdom, caused our high court of Parliament to assemble and meet, by Prorogation on the twentieth day of January last past, since which time the same has been continued. And although in this time, by the malevolent [bad] dispositions of some ill affected persons of the House of Commons, we have had sundry [many] just causes of offence and dislike of their proceedings, yet we resolved with patience to try the utmost, which we the rather did, for that we found in that house a great number of sober and grave persons, well affected to Religion and government and desirous to preserve unity and peace in all parts of Our Kingdome. And wherefore, having on the five and twentieth day of February last, by the uniform advice of Our Privy Council, caused both houses to be adjourned until this present day, hoping in the mean time, that a better and more right understanding might be begotten between Us and the members of that House, whereby this Parliament might have a happy end and issue.

And for the same intend, we did again this day command the like Adjournment to be made, until the tenth day of this month: It hath so happened by the disobedient and seditious carriage of those said ill affected persons of the House of Commons, That we & Our Regal authority and commandment, have been so highly condemned, as Our Kingly Office cannot bear, nor any former age can parallel. And therefore it is Our full, and absolute resolution, to dissolve the same Parliament, whereof we thought good, to give notice unto all the Lords Spiritual and Temporal, and to the Knights, Citizens, and Burgesses of this present Parliament, and to all others whom it may concern, that they may depart about their needful affairs, without attending any longer here. Nevertheless, we will that they, and all others should take notice that we do, and ever will distinguish between those, who have showed good affection to Religion and Government, and those that have given themselves over to faction, and to work disturbance to the peace, and good order of Our Kingdom.

Given at Our Court at White-Hall, This second day of March, in the fourth year of Our Reign of Great Britain, France, and Ireland.

God save the King.