An extract from the ‘Report upon the state of the hospitals of the British Army in the Crimea and Scutari’ 1855, Catalogue ref: WO 33/1

This report describes the work of Florence Nightingale and her nurses in the hospital at Scutari. 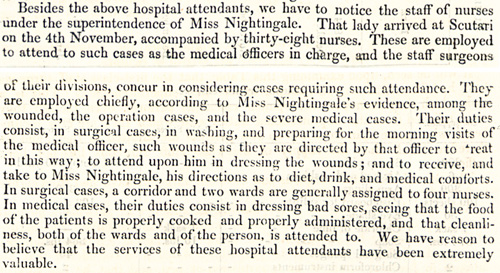 Besides the above hospital attendants [helpers], we have to notice the staff of nurses under the superintendence [looked after by] of Miss Nightingale. That lady arrived at Scutari on the 4th November, accompanied by thirty-eight nurses. These are employed to attend to such cases as the medical officers in charge, and the staff surgeons of their divisions, concur [agree need to be nursed] in considering cases requiring such attendance. They are employed chiefly, according to Miss Nightingale’s evidence, among the wounded, the operation cases, and the severe medical cases. Their duties consist, in surgical cases [those who had operations], in washing, and preparing for the morning visits of the medical officer, such wounds as they are directed by that officer to treat in this way; to attend upon him in dressing the wounds; and to receive, and take to Miss Nightingale, his directions as to diet, drink, and medical comforts. In surgical cases, a corridor and two wards are generally assigned [looked after] to four nurses. In medical cases, their duties consist in dressing bad sores, seeing that the food of the patients is properly cooked and properly administered [given], and that cleanliness, both of the wards and of the person, is attended to. We have reason to believe that the services of these hospital attendants [nurses] have been extremely valuable

As well as the other helpers mentioned in this report, we will comment on the nurses working for Miss Nightingale.

Florence Nightingale arrived in Scutari on 4th November with 38 nurses. They work with patients that the doctors tell them to look after. They care for the wounded, men who have had operations, making sure they are washed and ready for visits from the doctors. They also help to dress wounds, and let Miss Nightingale know what medicine, food and drink the doctor advises for each patient. Men who have had operations are cared for in two wards and a corridor by four nurses. For the other patients, the nurses make sure that bad sores are dressed, patients are clean and well fed and that the wards are clean too. We think that these nurses have made a big difference.