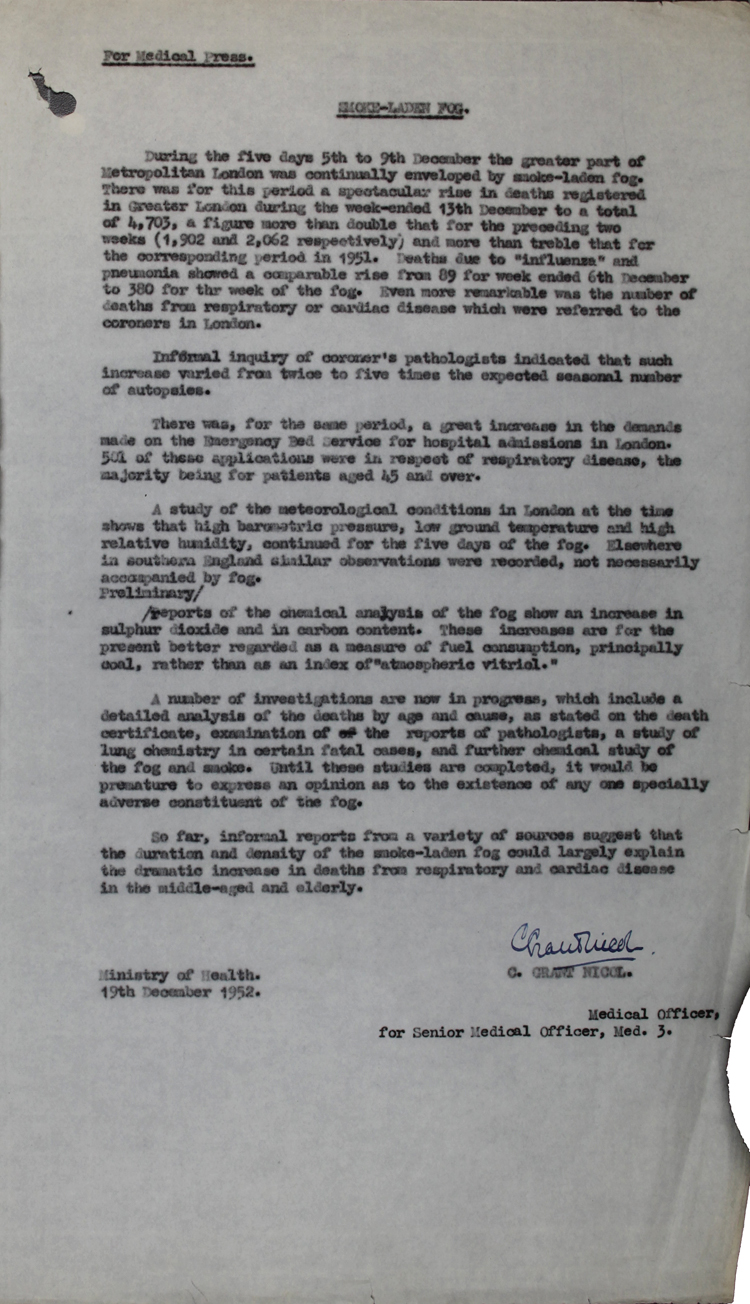 For the Medical Press.

During the five days 5th to 9th December the greater part of Metropolitan London was continually enveloped by smoke-laden fog. There was for this period a spectacular rise in deaths registered in Greater London in this period during the week-ended 13th December to a total of 4,703, a figure more than double that for the preceeding two weeks (1,902 and 2,062 respectively) and no more than treble that for the corresponding period in 1951. Deaths due to “influenza” and pneumonia showed a comparable rise from 89 for week ended 6th December to 380 for the week of the fog. Even more remarkable was the number of deaths from respiratory or cardiac disease which were referred to the coroners in London.

Informal inquiry of coroner’s pathologists indicated that such increase varied from twice to five times the expected seasonal number of autopsies.

There was for the same period, a great increase in the demands made on the Emergency Bed Service for hospital admissions in London. 501 of these applications were in respect of respiratory disease, the majority being for patients aged 45 and over.

A study of the meteorological conditions in London at the time show that high barometric pressure, low ground temperature and high relative humidity, continued for the five days of the fog. Elsewhere in southern England similar observations were recorded, not necessarily accompanied by fog.

Preliminary reports of the chemical analysis of the fog show an increase in sulphur dioxide and in carbon content. These increases are for the present better regarded as a measure of fuel consumption, principally coal. Rather than as an index of “atmospheric vitriol.”

A number of investigations are now in progress, which include a detailed analysis of the deaths by age and cause, as stated on the death certificate, examination of the reports of pathologists, a study of lung chemistry in certain fatal cases, and further chemical study of the fog and smokes. Until these studies are completed, it would be premature to express an opinion as to the existence of any one specially adverse constituent of the fog.

So far, informal reports from a variety of sources support that the duration and density of the smoke -laden fog could largely explain the dramatic increase in deaths from respiratory and cardiac disease in the middle-aged and elderly.