Sir Thomas Gresham to Elizabeth I 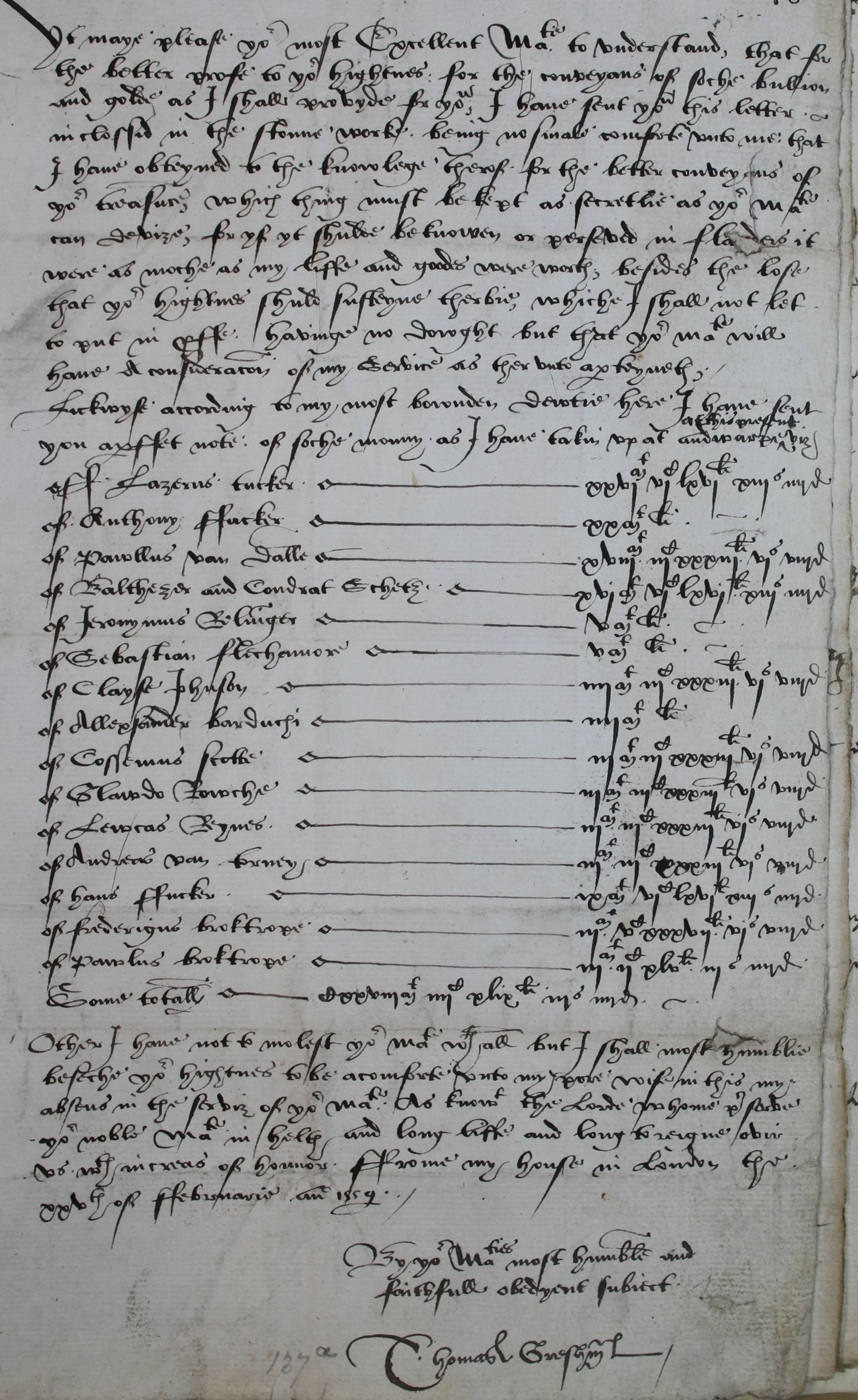 Gresham was one of the wealthiest men in England. In this letter, he writes to inform his queen that he has arranged loans secured on the Antwerp Exchange from 15 bankers (who are listed in the letter), totalling £128,449 3s 4d. This was to help finance the first war of Elizabeth’s reign – her eventually successful attempt to eject the French from Scotland. Given that the Crown’s entire annual income was normally around £250,000, it was a substantial loan. The export of bullion from the Low Countries was prohibited, so Gresham used various subterfuges – such as on this occasion concealing it in some ‘stonne work’ [stonework], along with his letter. He wrote it when he was about to embark for the Netherlands to serve as ambassador to the Duchess of Parma, who was regent. In contrast to her father, Henry VIII, Elizabeth was averse to waging wars, which were ruinously expensive.

Yt maye please your most Excellent Majestie to understsand, that for the better profe to your hightnes: for the conveyans [conveyance] of soche bullion and golde as I shall provyde for you, I have sent you this letter inclossed [enclosed] in the stonne worke being no smale comforte unto me: that I have obteyned to the knowledge therof for the better conveyans of your treasure, which thing must be kept as secretlie as your Majestie can devize, for yf yt shulde be knowen or perseved [perceived] in fla[n]ders it were as moche as my liffe and goods were worth, besides the lose that your hightnes shuld susteyne therbie, whiche I shall not let to put in perse havinge no dowght but that your Majestie will have a consideracion of my Service as ther unto aperteyneth…

[There follows a list of the bankers and how much each is lending.]

Other I have not to molest your Majestie withal but I shall most humblie beseche your highthnis to be acomforte unto my pore wife in this my absens in the serviz of your Majestie. As knowest the Lorde whome preserve your noble Majestie in helth and long liffe and long to reigne over us with increas of honour. Ffrom my house in London the xxvth of ffebruarie anno 1559 [1560 N.S.]. By your Majesties most humble and faithfull obedient subject. Thomas Gresham.