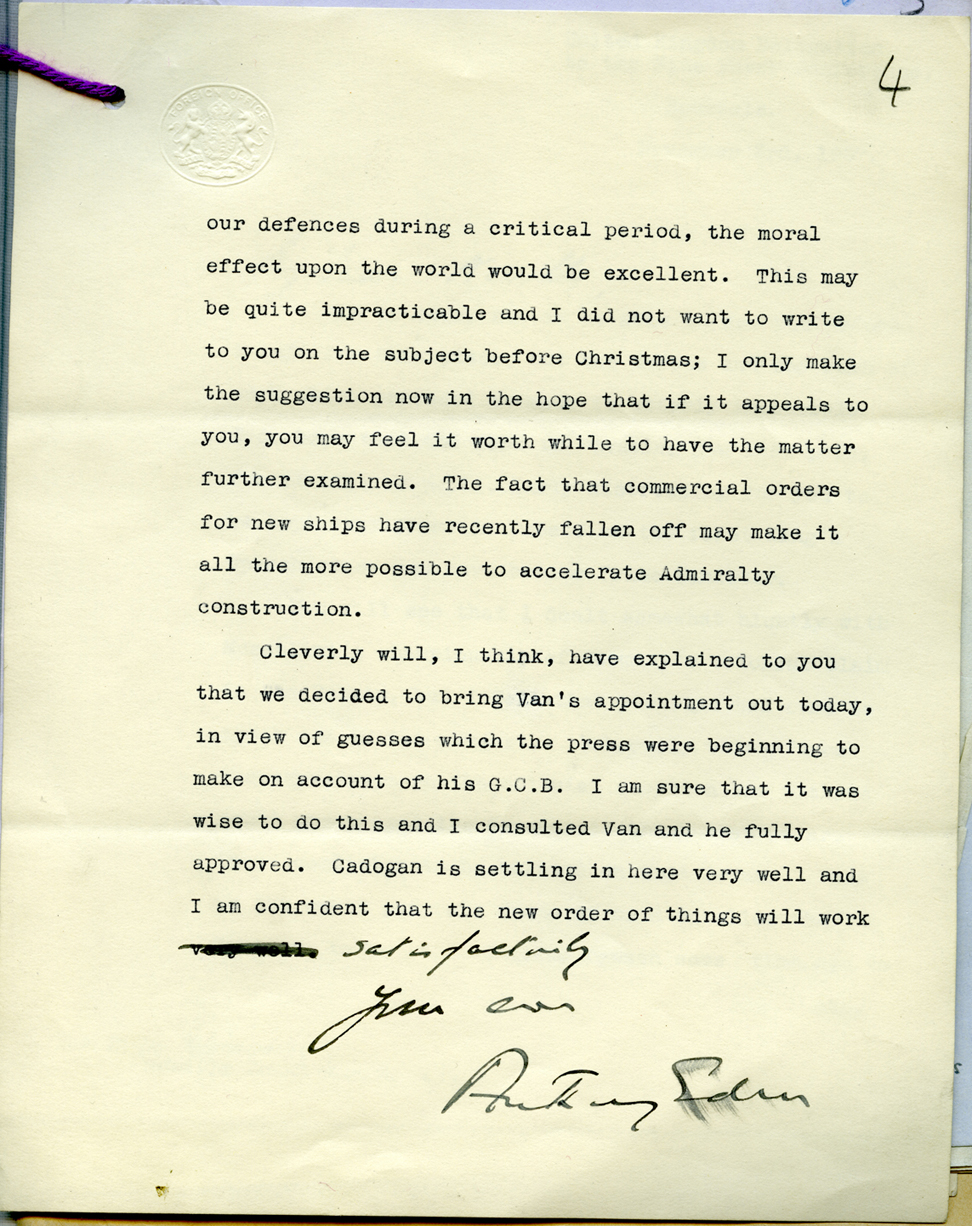 … our defences during a critical period, the moral effect upon the world would be excellent. This may be quite impracticable and I did not want to write to you on the subject before Christmas; I only make the suggestion now in the hope that if it appeals to you, you may feel it worth while to have the matter further examined. The fact that commercial orders for new ships have recently fallen off may make it all the more possible to accelerate Admiralty construction.

Cleverly will, I think, have explained to you that we decided to bring Van’s appointment out today, in view of guesses which the press were beginning to make on account of his G.C.B. I am sure that it was wise to do this and I consulted Van and he fully approved. Cadogan is settling in here very well and I am confident that the new order of things will work very well satisfactorily.
Your ever,
Anthony Eden

Sir Alexander George Montagu Cadogan: British politician in the Ministry of Foreign Affairs at the same time as Anthony Eden
A.E.M. Chatfield
Lord A.E.M. Chatfield: Minister for Co-ordination of Defence for the British National Government (September 1939)
Royal E. Ingersoll
President Roosevelt of USA sent American naval officer, Captain Royal E. Ingersoll, to London in late 1937. In January, 1938, Ingersoll discussed the possible relations and operations of the United States and Great Britain in case they ‘were involved in a war with Japan in the Pacific which would include the Dutch, the Chinese, and possibly, the Russians.’ From this time onward Ingersoll had no doubt that Roosevelt had war with Japan in the back of his mind and made no bones of this fact in his confidential discussions.
Robert Vansittart ‘Van’
Permanent under-secretary at the Foreign Office. He was very anti-German. His hostility to Germany was such an threat to Chamberlain’s policies that he was moved sideways to the prestigious but meaningless job of Chief Diplomatic Adviser in 1938.
G.C.B This means that someone is a member of the Most Honourable Order of the Bath
Cleverly Most likely a member of the Prime Ministers staff