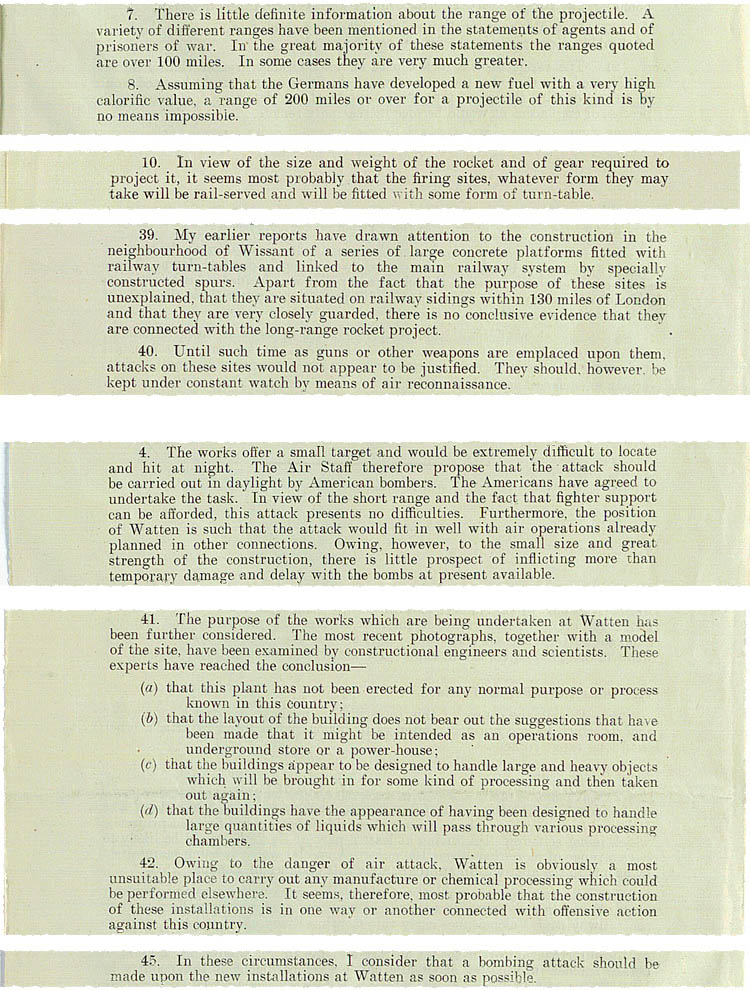 7. There is little definite information about the range of the projectile. A variety of different ranges have been mentioned in the statements of agents and of prisoners of war. In the great majority of these statements the ranges quoted are over 100 miles. In some cases they are very much greater.

8. Assuming that the Germans have developed a new fuel with a very high calorific value, a range of 200 miles or over for a projectile of this kind is by no means impossible.

10. In view of the size and weight of the rocket and of the gear required to project it, it seems most probable that the firing sites, whatever form they may take will be rail-served and will be fitted with some form of turn-table.

39. My earlier reports have drawn attention to the construction in the neighbourhood of Wissant of a series of large concrete platforms fitted with railway turn-tables and linked to the main railway system by specially constructed spurs. Apart from the fact that the purpose of these sites is unexplained, that they are situated on railway sidings within 130 miles of London and that they are very closely guarded, there is no conclusive evidence that they are connected with the long-range rocket project.

40. Until such time as guns or other weapons are emplaced upon them, attacks on these sites would not appear to be justified. They should, however, be kept under constant watch by means of air reconnaissance.

4. The works offer a small target and would be extremely difficult to locate and hit at night. The Air Staff therefore propose that the attack should be carried out in daylight by American bombers. The Americans have agreed to undertake the task. In view of the short range and the fact that fighter support can be afforded, this attack presents no difficulties. Furthermore, the position of Watten is such that the attack would fit in well with air operations already planned in other connections. Owing, however, to the small size and great strength of the construction, there is little prospect of inflicting more than temporary damage and delay with the bombs at present available.

41. The purpose of the works which are being undertaken at Watten has been further considered. The most recent photographs, together with a model of the site, have been examined by constructional engineers and scientists. These experts have reached the conclusion-

(a) that this plant has not been erected for any normal purpose or process known in this country;
(b) that the layout of the building does not bear out the suggestions that have been made that it might be intended as an operations room, and underground store or a power-house;
(c) that the buildings appear to be designed to handle large and heavy objects which will be brought in for some kind of processing and then taken out again;
(d) that the buildings have the appearance of having been designed to handle large quantities of liquids which will pass through various processing chambers.

42. Owing to the danger of air attack, Watten is obviously a most unsuitable place to carry out any manufacture or chemical processing which could be performed elsewhere. It seems, therefore, most probable that the construction of these installations is in one way or another connected with offensive action against this country [Britain].

45. In these circumstances, I consider that a bombing attack should be made upon the new installations at Watten as soon as possible.

« Return to British Response to V1 and V2

1. Read Sources 1 and 2. You must advise the War Cabinet on the threat level from three sites: Peenemunde, Wissant and Watten. These sites are believed to be part of the German rocket project. Read the documents and then answer the questions.