A teacher points students towards details in a census

Suggested inquiry questions: What can archives reveal about people’s lives in the 1920s?

Potential activities: Explore the case studies to discover the stories of our 20sStreets

What can archives reveal about people’s lives in the 1920s?

This resource was created a as result of 20sStreets, a project designed to bring local history to life for students. The National Archives collaborated with four local archives; Tower Hamlets, Lancashire, West Yorkshire and Kresen Kernow to help children explore life in one local street 100 years ago. This education resource includes eight selected case studies from this project. Each case study focuses on a different household in the 1920s, firstly through the 1921 census, then a range of documents from archival collections. The locations explored are Tower Hamlets, Accrington, Wakefield and Falmouth. Students are encouraged to be history detectives, investigating people’s lives using documents as clues. This helps pupils gain a deeper understanding of what life was like 100 years ago, what people’s jobs were, how they had fun and what their houses might have looked like. This resource can also open up a discussion about what information archives contain and how they can help us find out about ordinary people’s lives. It is suggested that students are divided in to groups focusing on different case studies. There are also creative activities included to extend student’s learning.

The 1920s was a time of huge change and contrast in politics, the economy and society. Some women gained the vote, the car transformed the transport of the age and there were exciting new forms of entertainment. However there was also great poverty and unemployment. The 1921 census was completed by households in an era impacted hugely by the First World War and the Spanish flu which had claimed the lives of over 200,000 people in Britain.

On the 19th June 1921 close to thirty eight million individuals completed a census return. The census was delayed by two months because of the coal miner’s Black Friday Strike. The census was filled in by one of the household by hand. Censuses are taken every 10 years. The census records will then remain closed for 100 years before they are opened to the public. The 1921 is Census is particularly important, as it will be the last census publication for some years to come – the 1931 Census of England and Wales was destroyed in a fire, the 1941 Census was never taken due to the outbreak of the Second World War, and the 1951 Census is not due to be released until 2052.

The role of women is a key theme that is explored in the census records. Many women had taken on jobs in the First World War such as in munitions factories. After the war some women did not want to return to not having a job outside of the home. Women were spending more money, going out in the evenings to places like the cinema and there was a huge shift in fashion to outfits that women could move more easily in. In 1918 women over thirty with certain amount of property were granted the right to vote. In 1928 everyone including women over the age of twenty one had the right to vote. Teaching was a common profession for women, female teachers usually from middle classes and it was expected you would leave your job if you got married. Female teachers were paid less than men. Case Study E explores the story of Flora Hansford, a young teacher at a school in Accrington.

Despite these changes the 1921 census shows that women overwhelmingly fulfil domestic roles within the home. Although there were time saving appliances like carpet sweepers, house work would have been very time consuming. Washing machines and steam irons weren’t commonplace in homes until the 1940s. Refrigerators were very uncommon in homes in the 1920s. Most families would have ice boxes delivered to them. This meant that they had to buy meat and fresh food like vegetables close to the day of eating. Many families still lived in houses with outside toilets in the 1920s. This is evident in the house plans for Park road in Accrington featured in Case Study D and Case Study E. At this stage no families would have had a telephone in their home and only a few wealthy households would have owned a wireless towards the end of the 1920s.

In 1921 the age school children could leave was raised from twelve to fourteen. Children from poorer families would often go to school part-time and be expected to help at home. The curriculum at state schools was usually focused on reading, writing and arithmetic. Boys were sometime offered woodwork and technical drawing. Girls would do needlework and domestic science. Other subjects like history became more commonplace towards the end of the 1920s. There are several documents like school log books that give insight into what school was like. For instance Case Study G mentions that Ethel Pascoe was ‘highly commended’ in her religious instruction class.

A number of the case studies explore food in the 1920s. For instance Case Study A is a family of butchers. Most families would have bought meat rarely as it was expensive. If they cooked meat for instance for a Sunday roast, the leftover meat would be used in a dish like shepherd’s pie, a soup or broth might also be made. Due to the lack of fridges in homes people had to buy fresh produce close to the day they ate. Fish and chip shops were extremely popular in the 1920s, often situated in people’s houses, in fact there were an estimated thirty five thousand in Britain!

Some of the case studies involve travel and immigration, for instance Allan Hargreaves in Case Study F was born ‘at sea.’ Other records reveal that he was born on board the Lusitania ship travelling from New York to Liverpool. This was one of the fastest passenger ships at this time and would have taken about seven days to cross the Atlantic. It is not clear why his parents were travelling but it was most likely to have been for work. The Lusitania later was famously sunk in the First World War by a German U-boat in 1915.

In the 1920s only wealthy people would have owned a motorcar, however the numbers of people owning cars rose hugely in the 1920s. The family in Case Study H own a cab company, which unlike in the early 20th century would have certainly been using motorcars.

The Templehof family in Case Study B are part of a large Jewish community in East London in the 1920s. Anti-Jewish riots and poverty had caused millions of Jewish people living in Eastern Europe to leave their homes between 1870 and 1914. The British government began to pass laws controlling immigration for the first time from 1905. The Aliens Act declared that ‘undesirable immigrants’ would be denied entry to Britain, these restrictions were mostly aimed at Jewish and Eastern European immigrants. 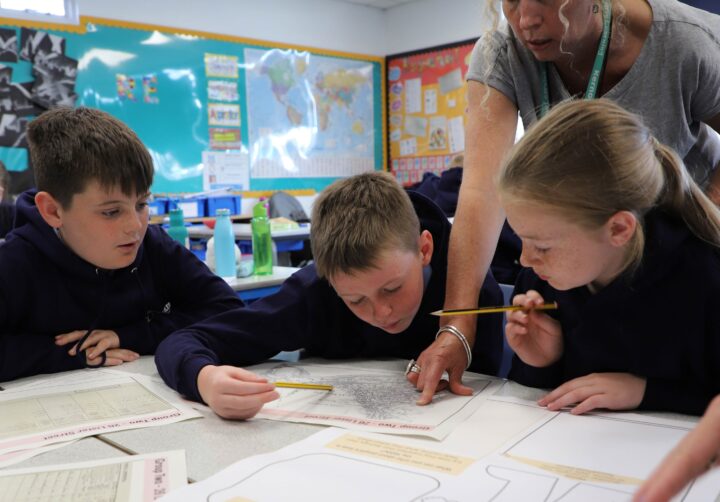 Three students explore a document guided by their teacher

This resource is designed to be used by students learning in groups. Before they do the activities you may want to establish with students what a census is and some context about life in the 1920s. You can read the background section for information and the key themes that the case studies explore.

The second part of the activity is looking at a range of other sources from archival collections that link to this households. Sometimes they directly reference a person in the census or it might be a less obvious link. There is a question for each source. You may want to split the group and have different people looking at each source. The group can then discuss what they have learnt and reflect on the questions they asked earlier. Students may find that their questions are not answered which reflects the nature of researching using historical documents.

General class discussion could include the following questions:

There are creative activities that students could do after they have looked at these case studies. They encourage pupils to imagine what these people’s lives might have been like based on the historical documents they have investigated.

Jewish community in the East End

Suggested inquiry questions: What can archives reveal about people’s lives in the 1920s?

Potential activities: Explore the case studies to discover the stories of our 20sStreets

What can you find out?