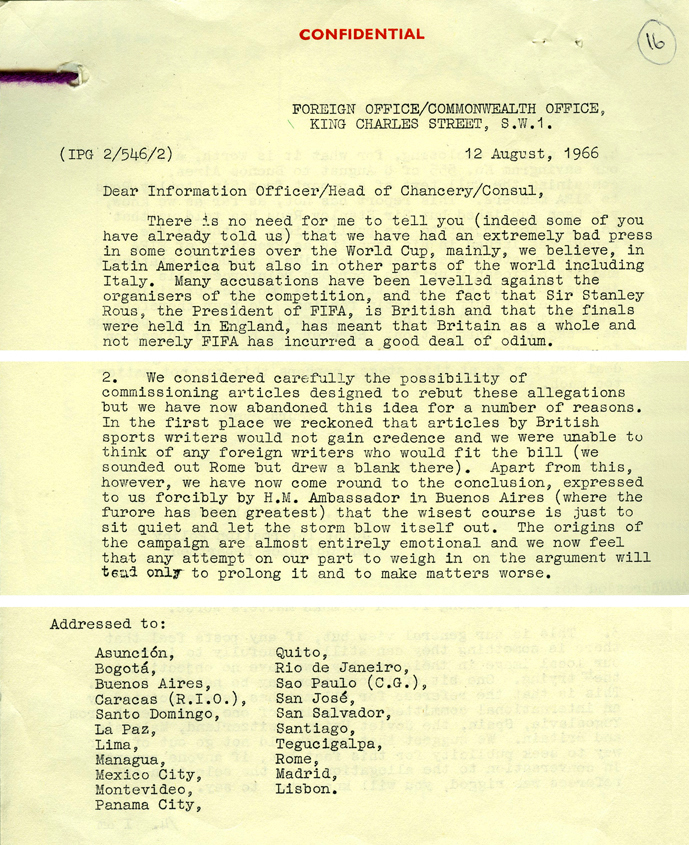 There is no need for me to tell you (indeed some of you have already told us) that we have had an extremely bad press in some countries over the World Cup, mainly, we believe, in Latin America but also in other parts of the world including Italy. Many accusations have been levelled against the organisers of the competition, and the fact that Sir Stanley Rous, the President of FIFA, is British and that the finals were held in England, has meant that Britain as a whole and not merely FIFA has incurred a good deal of odium.

2. We considered carefully the possibility of commissioning articles designed to rebut these allegations but we have now abandoned this idea for a number of reasons. In the first place we reckoned that articles by British sports writers would not gain credence and were unable to think of any foreign writers who would fit the bill (we sounded out Rome but drew a blank there). Apart from this, however, we have come round to the conclusion, expressed to us forcibly by H.M. Ambassador in Buenos Aires (where the furore has been greatest) that the wisest course is just to sit quiet and let the storm blow itself out. The origins of the campaign are almost entirely emotional and we now feel that any attempt on our part to weigh in on the argument will tend only to prolong it and to make matters worse.

2. Read Source 2. This is a confidential letter sent to 18 British representatives in South and Central American countries.