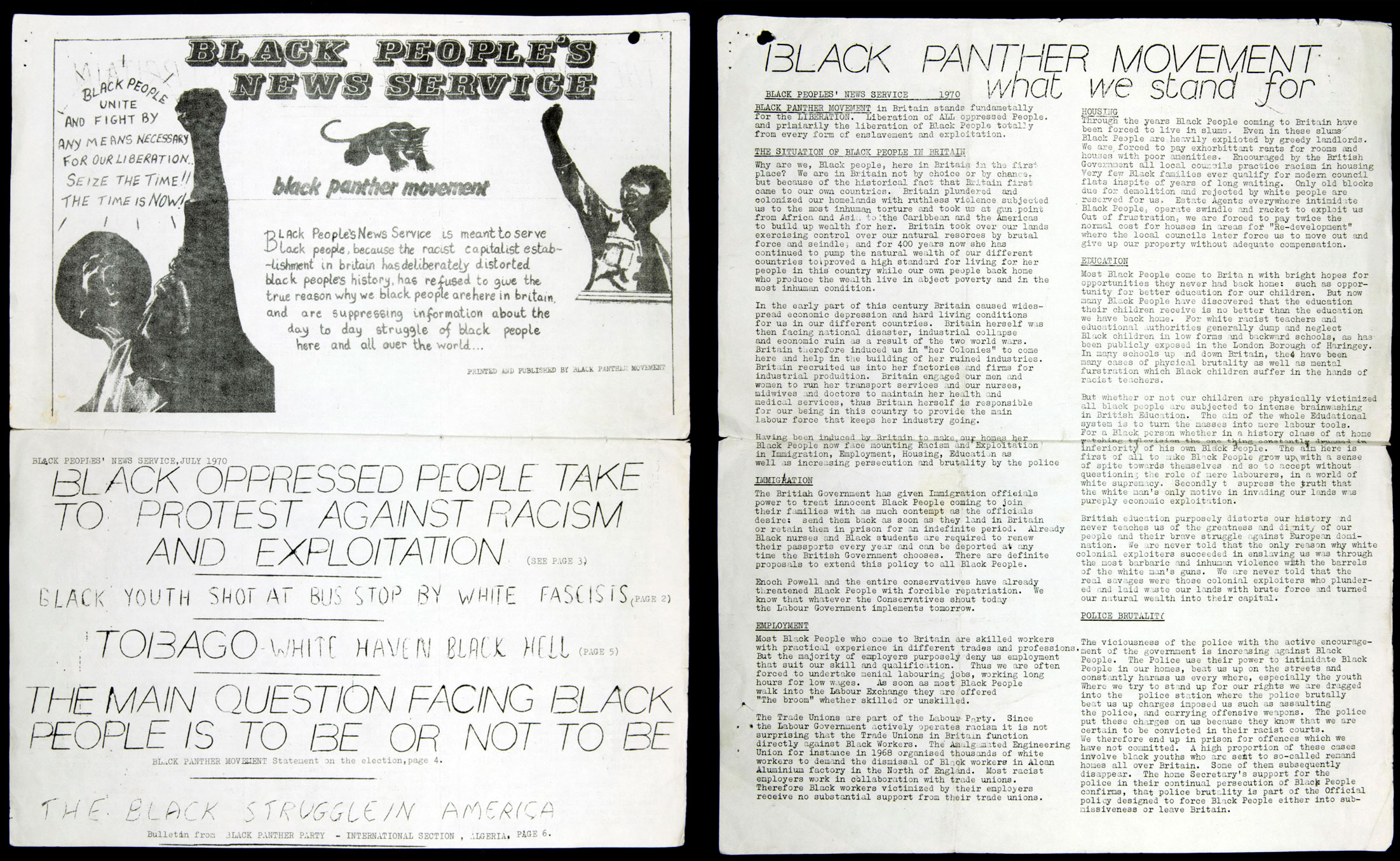 BLACK PEOPLE UNITE AND FIGHT BY ANY MEANS NECESSARY FOR OUR LIBERATION. SEIZE THE TIME! THE TIME IS NOW!

Black People’s News Service is meant to serve black people because the racist capitalist establishment in Britain has deliberately distorted black peoples history, has refused to give the true reason why we black people are here in Britain and are supressing information about the day to day struggle of black people here and all over the world…

THE BLACK STRUGGLE IN AMERICA

[‘The Situation of Black People in Britain’ transcribed.]

What we stand for

BLACK PANTHER MOVEMENT in Britain stands fundamentally for the LIBERATION. Liberation of ALL oppressed People. And primarily the liberation of Black People totally from every form of enslavement and exploitation.

The Situation of Black People in Britain

Why are we, Black people, here in Britain in the first place? We are in Britain not by choice or by chance, but because of the historical fact that Britain first came to our own countries. Britain plundered and colonized our homelands with ruthless violence subjected us to the most inhuman torture and took us at gun point from Africa and Asia to the Caribbean and the Americas to up wealth for her. Britain took over our lands exercising control over our natural resources by brutal force….; and for 400 years now she has continued to pump the natural wealth of our different countries to [provide] a high standard of living for her people in this country while our own people back home who produce the wealth live in abject poverty and in the most inhuman condition.

In the early part of this century Britain caused widespread economic depression and hard living conditions for us in our different countries. Britain herself was then facing a national disaster, industrial collapse and economic ruin as a result of the two world wars. Britain therefore induced us in ‘her Colonies’ to come here and help in the building of her ruined industries. Britain recruited us into her factories and firms for industrial production. Britain engaged our men and women to run her transport services and our nurses, midwives and doctors to maintain her health and medical services, thus Britain herself is responsible for our being in this country to provide the main labour force that keeps her industry going.

Having been induced by Britain to make our homes her[e] Black People now face mounting Racism and Exploitation in Immigration, Employment, Housing, Education as well as increasing persecution and brutality by the police