Sam Morris (b.1908-d.1976), deputy-general of the Community Relations Commission was asked to write a report for the Home Secretary a week after the protest. According to Morris, this report was ‘based on eyewitness accounts. Some of those to whom I spoke are known to me personally and are quite reliable.’

The Community Relations Commission, established by the 1968 Race Relations Act, sought to promote good ‘community relations’ between black and minority ethnic communities and white people in Britain. Sam Morris was a Grenada-born educationalist, anti-colonialist and civil rights activist. He first came to London in 1939. After serving in the British Army for two and half years during the war, he soon began working to support the welfare of New Commonwealth Immigrants in Britain. 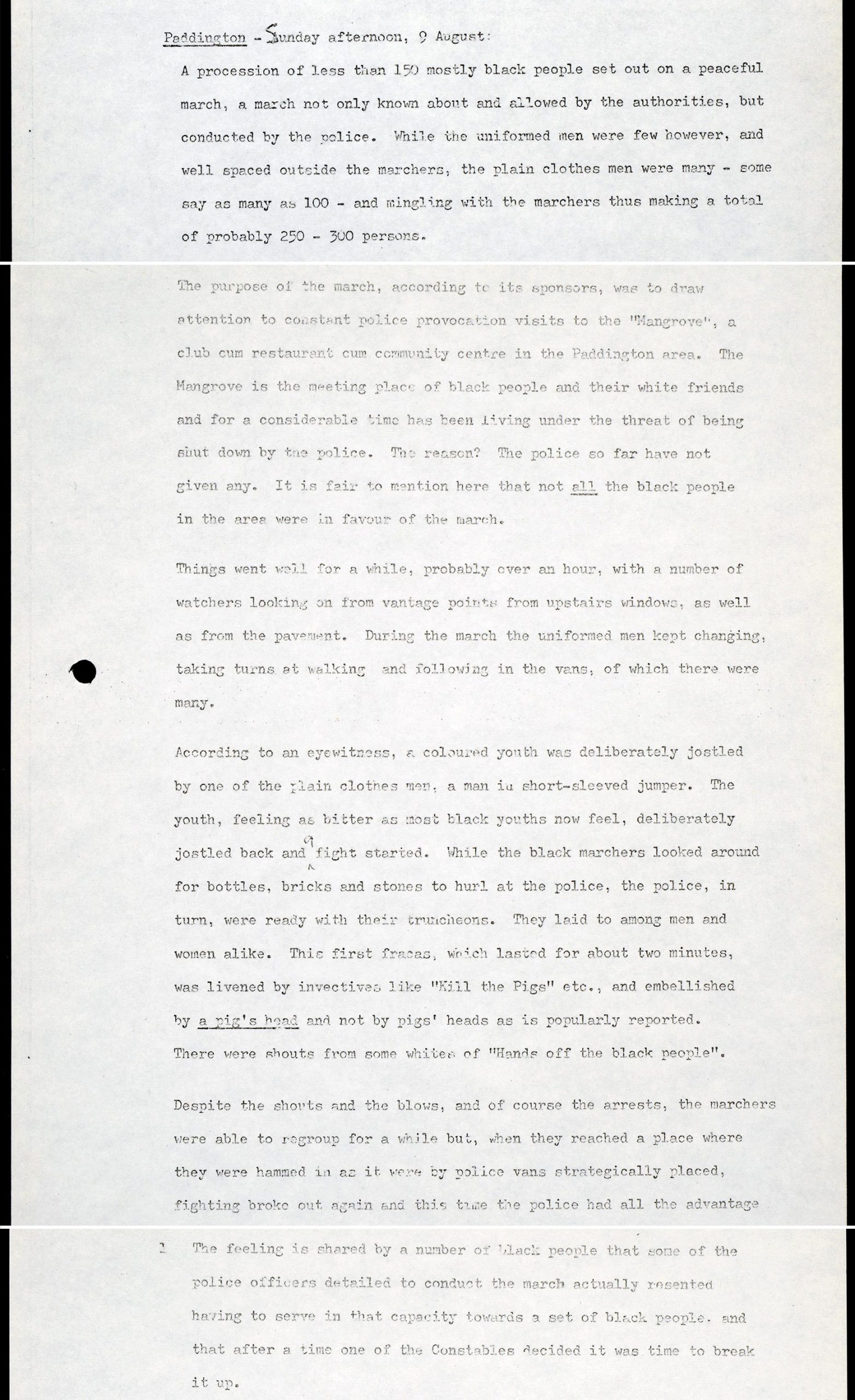 A procession of less than 150 mostly black people set out on a peaceful march, a march not only known about and allowed by the authorities, but conducted by the police. While the uniformed men were few however, and well spaced outside the marchers, the plain clothes men were many- some say as many as 100 and mingling with the marchers, thus making a total of probably 250-300 persons.

Things went well for a while, probably over an hour, with a number of watchers looking on from vantage points from upstairs windows, as well as from the pavement. During the march the uniformed men kept changing, taking turns at walking and following in the vans, of which there were many.

According to an eyewitness, a coloured youth was deliberately jostled by one of the plain clothes [police]men, a man in a short-sleeved jumper. The youth, feeling as bitter as most black youths now feel, deliberately jostled back and a fight started. While the black marchers looked around for bottles, bricks and stones to hurl at the police, the police, in turn, were ready with their truncheons. They laid to among men and women alike. This first fracas [fight], which lasted for about two minutes, was livened by invectives [insulting language] like ‘Kill the Pigs’ etc., and embellished [exaggerated] by a pig’s head and not by pigs’ heads as is popularly reported.

Despite the shouts and the blows, and of course the arrests, the marchers were able to regroup for a while but, when they reached a place were they were hammed in as it were by police vans strategically placed, fighting broke out again and this time the police had all the advantage.

The feeling is shared by a number of black people that some of the police officers detailed to conduct the march actually resented having to serve in that capacity towards a set of black people, and that after a time one of the Constables decided it was time to break it up…