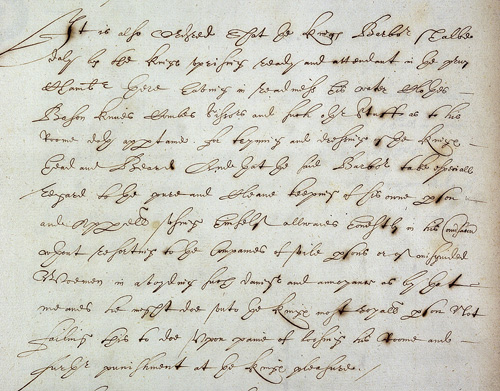 It is alfo ordered, that the King’s barbor fhall be dayly by the King’s uprifeing, ready and attendant in the privy chamber there having in readineffe, his water, cloths, knives, combes, fiffors, and fuche other ftuffe as to his roome doth apperteyne, for trimming and dreffing the King’s head and beard. And that the faid barbor take efpeciall regard to the pure and cleane keeping of his own perfon and apparell; ufing himfelfe alwayes honeftly in his converfation, without reforting to the company of vile perfons, or of mifguided women, in avoyding fuch dangers and annoyance as by that meanes he might doe unto the Kinge’s moft royall perfon; not failing this to doe, upon paine of loofeing his roome, and further punifhment at the King’s pleafure.

It is also ordered, that the King’s barber shall be daily by the King’s uprising, ready and attendant in the privy chamber there having ready, his water, cloths, knives, combs, scissors, and such other stuff as he needs, for trimming and dressing the King’s head and beard. And that the said barber take special regard to the pure and clean keeping of his own person and apparel; using himself always honestly in his conversation, without resorting to the company of vile persons, or of misguided women, in avoiding such dangers and annoyance as by that means he might do unto the King’s most royal person; not failing this to do, upon pain of loosing his room, and further punishment at the King’s pleasure.

2. This section of the ordinances deals with the duties of the King’s barber and the behaviour of his staff.