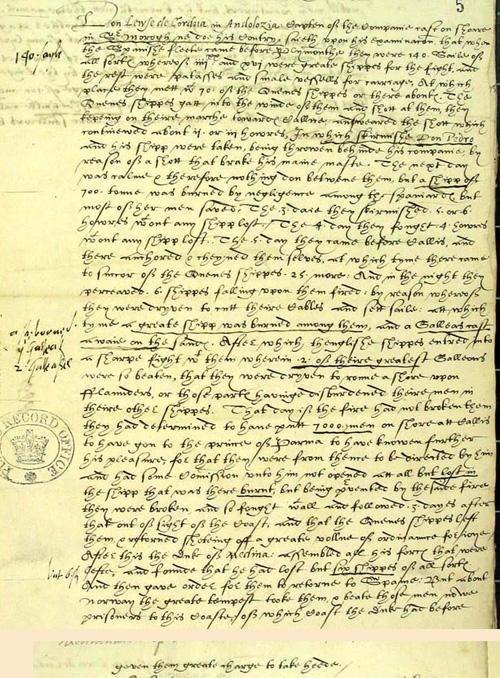 Don Lewse de Cordua in Andolozia: Capten of the Companie cast on shoare in S[i]r Morogh ne doe his Contry, saieth upon his examinac[i]on, that when the Spanishe fleete came before Plymouthe they were 140 Saile of all sorts whereof iiijxx and xvj were greate shippes for the fight, and the rest were patasses and small vessells for carriage, At which place they mett w[ith] 70 of the Quenes shippes or there abouts. The Quenes shippes gatt into the winde of them and shott at them, they kepeing on theire marche towards Callice, answeared the shott which continewed about ij or iij hower, In which skirmishe Don Pedro and his shipp were taken, being throwen behinde his companie, by reason of a shott that brake his maine mast.

The next day was calme & therefore nothing don betwene them, but a shipp of 700 tonne was burned by negligence among the Spaniards, but most of her men saved. The 3[rd] daie they skirmished 5 or 6 howers w[ith]out any shipp lost. The 4[th] day they fought 4 howres w[ith[out any shipp lost. The 5[th] day they came before Callis, and there anchored & cheyned them selves, at which tyme there came to succor of the Quenes shippes 25 more: And in the night they perceaved 6 shippes falling upon them fired: by reason whererof they were dryven to cutt theire Cables and sett saile: att which tyme a greate shipp was burned among them, and a Galleas cast awaie on the sands. After which thenglishe shippes entred into a sharpe fyght w[i]t[h] them wherein 2 of theire greatest Galleons were so beaten, that they were dryven to come a shore upon fflaunders, or those parts havinge disburdened theire men in theire other shippes.

That day if the fire had not broken them they had determined to have putt 7000 men on shoare att Callis to have gon to the prince of Parma to have knowen further his pleasure, for that they were from thence to be directed by him and had some Com[m]ission unto him not opened att all but lost in the shipp that was there burnt, but being p[re]vented by the saide fire they were broken, and so fought w[ith] all and followed 3 dayes after that out of sight of the Coast, and that the Quenes shippes left them, & retorned shoteing off a greate vollue of ordinaunce for ioye. After this the Duke of Medina assembled all his forc[e]s that were lefte, and founde that he had lost but six shippes of all sorts. And then gave order for them to retorne to Spaine: But about Norway the greate tempest tooke them, & beate those men nowe prisoners to this Coaste, of which Coast the Duke had before geven them greate charge to take heede.

The examination of Don Lewes de Cordua in Andalusia

Don Lewes de Cordua in Andalusia, captain of the fleet cast on shore in Sir Morogh […]

He said, when examined, that when the Spanish fleet came near Plymouth they were 140 ships of all types. Of which there were 96 great ships for the fight, and the rest were small vessels. At which place they met with 70 of the Queen’s ships or thereabouts. The Queen’s ships got into the wind of them and shot at them; they, keeping on their route towards Calais, shot back at them, which continued for about 2 or 3 hours. In this skirmish Don Pedro and his ship were taken, being thrown behind the fleet, because of a shot that broke his main mast.

The next day was calm and therefore nothing happened between them, but a ship of 700 tonnes was burned by negligence among the Spaniards, but most of her men were saved. On the 3rd day, they skirmished 5 or 6 hours without any ship being lost. On the 4th day they fought 4 hours without any ship being lost. On the 5th day they came near Calais, and anchored there and chained the ships. At which time, there came to the help of the Queen’s ships 25 more. And during the night they perceived 6 fire ships coming towards them so they were driven to cut their cables and set sail. At this point a great ship was burnt amongst them, and a galleass [military ship] was cast away on the sands. After which the English ships entered into a sharp fight with them, in which two of their greatest galleons [large ships] were so beaten that they were driven to come ashore upon Flanders, or those parts having disembarked their men from their other ships.

That day, if the fire had not broken the formation of the fleet, they had intended to land 7,000 men on shore at Calais to have gone to the Prince of Parma and be commanded by him at his pleasure, for thereafter they were to be directed by him and had a commission not opened at all but lost in the ship that was burnt, but being prevented by said fire they were broken, and so fought with all their power and it followed 3 days after that were out of sight from the coast, and that the Queen’s ships left them and returned joyfully shooting a large amount of fire. After this the Duke of Medina assembled all his forces that were left, and found that he had lost all but six ships of all sorts. And then he gave order for them to return to Spain. But near Norway, the great storm took them and pushed those men, who are now prisoners, to this coast, the very coastline that the Duke warned them about.

4. An extract from a Spanish captain’s account of the events. He had survived after being shipwrecked on the Irish coast and was then interrogated by the English, but eventually returned home to Spain.