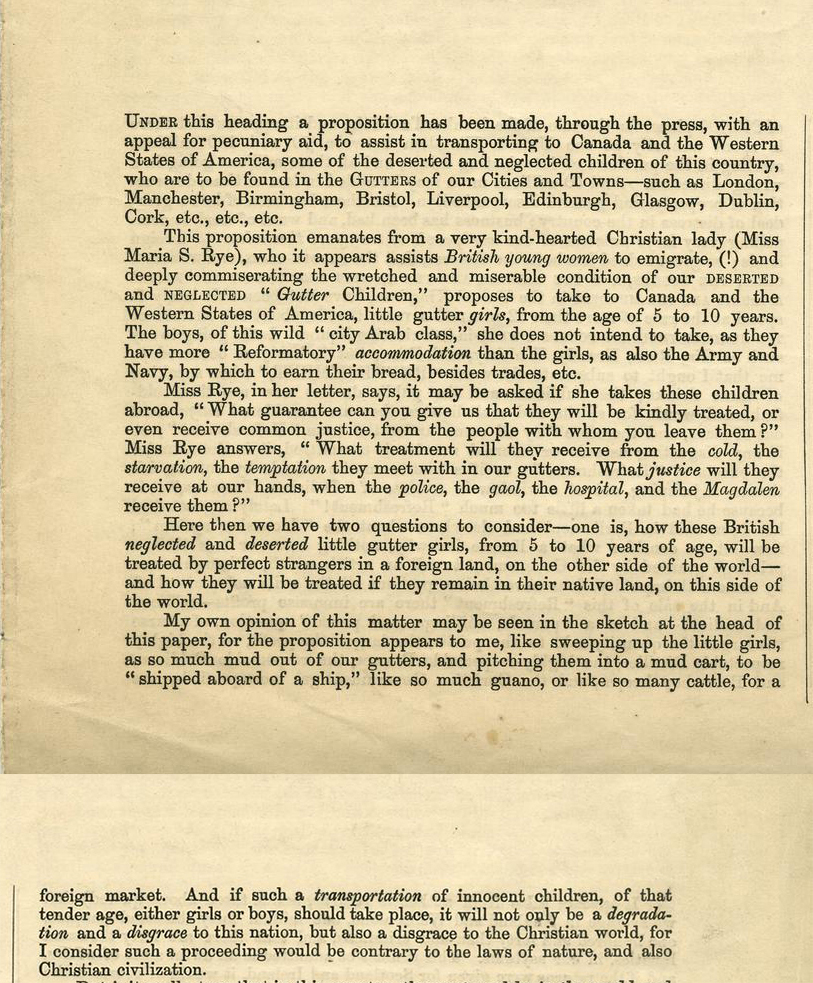 Under this heading a proposition has been made, through the press, with an appeal for pecuniary aid [request for money], to assist in transporting to Canada and the Western States of America, some of the deserted and neglected children of this country, who are to be found in the GUTTERS of our Cities and Towns—such as London, Manchester, Birmingham, Bristol, Liverpool, Edinburgh, Glasgow, Dublin, Cork, etc. etc. etc.

This proposition emanates [arises] from a very kind-hearted Christian lady (Miss Maria S. Rye), who it appears assists British young women to emigrate, (!) and deeply commiserating the wretched and miserable condition of our DESERTED and NEGLECTED “Gutter children”, proposes to take to Canada and the Western States of America, little gutter girls, from the age of 5 to 10 years. The boys, of this wild “city Arab** class”, she does not intend to take, as they have more “Reformatory*” accommodation than the girls, as also the Army and Navy, by which to earn their bread, besides trades, etc.

Miss Rye, in her letter, says, it may be asked if she takes these children abroad, “What guarantee can you give us that they will be kindly treated, or even receive common justice, from the people with who you leave them?” Miss Rye answers, “What treatment will they receive from the cold, the starvation, the temptation they meet in our gutters. What justice will they receive at our hands, when the police, the goal, the hospital, and the Magdalen***receive them?”

My own opinion of this matter may be seen in the sketch at the head of this paper, for the proposition appears to me, like sweeping up the little girls, as so much mud out of our gutters, and pitching them into a mud cart, to be “shipped aboard of a ship”, like so much guano****, or like so many cattle, for a foreign market. And if such a transportation of innocent children, of that tender age, either girls or boys, should take place, it will not only be a degradation and a disgrace to this nation, but also a disgrace to the Christian world, for I consider such a proceeding would be contrary to the laws of nature, and also Christian civilization.

* “Reformatory” accommodation – Cruickshank is probably referring to the Industrial School system set up in 1857. The Industrial Schools Act gave magistrates the power to send children between the ages of 7 and 14 years old to these institutions. The act was used to deal with children who were brought before the courts for living on the streets. Here, children were taught a trade to prevent them from turning to crime in the future. However, perhaps Cruickshank does not believe that these schools do any good as the word reformatory is in quotation marks or, because he does not actually name industrial schools, he could even be hinting at prison.

** The term ‘Street Arab’ for a homeless, poor child living on the streets was used from 1848, according to the Oxford English Dictionary. Charles Dickens used the term ‘Arab street boy’ in the publication Household Words: Volume 10, Bradbury & Evans, 1855, p355.

*** Magdalene Laundries, or asylums, were a system of orphanages, industrial schools, and mother and baby homes for unmarried mothers.

**** Guano: excrement of seabirds and bats, used as fertilizer.

Extracts from an article by George Cruickshank that appeared in a pamphlet accompanying the ‘Our Gutter Children’ cartoon, 1869 © The Trustees of the British Museum.