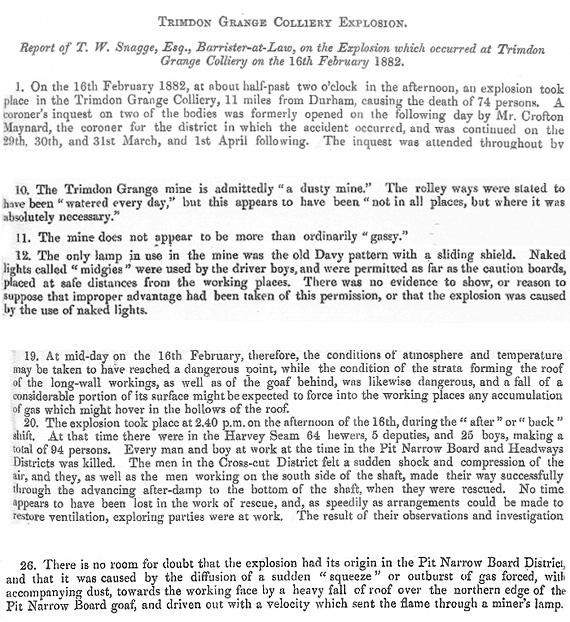 Report of T.W.Snagge, Esq., Barrister-at-Law on the Explosion which occurred at Trimdon Grange Colliery on the 16th February 1882.

1. On the 16th February 1882 at about half-past two o’clock in the afternoon, an explosion took place in the Trimdon Grange Colliery, 11 miles from Durham, causing the death of 74 persons. A coroner’s inquest on two of the bodies was formerly opened on the following day by Mr Crofton Maynard, the coroner for the district in which the accident occurrd, and was continued on the 29th, 30th, and 31st March, and 1st April following. The inquest was attended throughout by…

10. The Trimdon Grange mine is admittedly “a dusty mine.” The trolley ways were stated to have been “watered every day,” but this appears to have been “not in all places, but where it was absolutely necessary.”

11. The mine does not appear to be more than ordinarily “gasey”.

12. The only lamp in use in the mine was the old Davy pattern with a sliding shield. Naked lights called “midgies” were used by the friver boys, and were permitted as far as the caution boards, placed at safe distances from the working places. There was no evidence to show, or reason to suppose that improper advantage had been taken of this permission or that the explosion was caused by the use of naked lights. […]

19. At mid-day on the 16th February, therefore, the conditions of atmosphere and temperature may be taken to hve reached a dangerous point, while the condition of the strata forming the roof of the long-wall workings, as well as of the goaf behind, was likewise dangerous, and a fall of a considerable portion of its surface might be expected to force into the working places any accumulation of gas which might hover in the hollows of the roof.

20. The explosion took place at 2.40pm on the afternoon of the 16th, during the “after” or “back” shift. At that time there were in the Harvey Seam 64 hewers, 5 deputies and 25 boys making a total of 94 persons. Every man and boy at work at the time in the Pit Narrow Board and Headways districts were killed. The men in the Cross-cut District felt a sudden shock and compression of the air, and they, as well as the men working on the south side of the shaft, made their way successfully through the advancing after-damp to the bottom of the shaft when they were rescued. No time appears to have been lost in the work of rescue, and as speedily as arrangements could be made to restore ventilation, exploring parties were at work. The result of their observations and investigation…

26. There is no room for doubt that the explosion had its origin in the Pit Narrow Board Districts and that it was caused by the diffusion of a sudden “squeeze” or outburst of gas forced, with accompanying dust, towards the working face by a heavy fall of roof over the northern edge of the Pit Narrow Board goaf, and driven out with a velocity which sent the flame through a miners lamp.

4. This is part of the official report into the Trimdon Colliery disaster.