The trial of Bruno Tesch 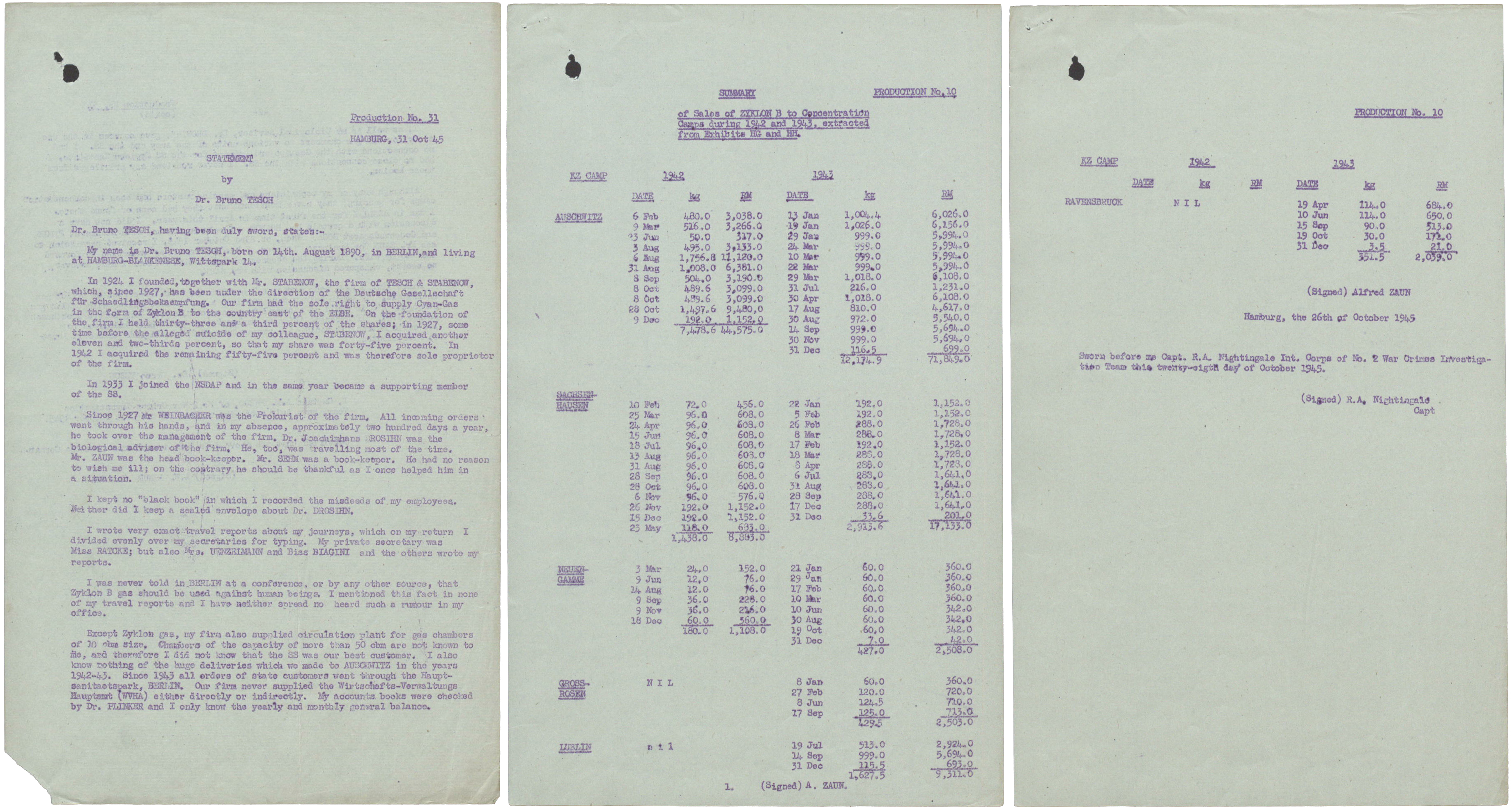 Statement at the trial of Bruno Tesch, owner of the company which produced and distributed Zyklon B gas to the camps (catalogue reference WO 309/625)

My name is Dr. Bruno TESCH, born on 14th August 1890, in Berlin, and living at HAMBURG-BLANKENESE, Wittspark 14.

In 1924 I founded, together with Mr. STABENOW, the firm of TESCH & STABENOW, which, since 1927, has been under the direction of the Deutsche Gasellschaft für Schaedlingsbekaempfung. Our firm had the sole right to supply Cyan-Gas in the form of Zyklon B to the country east of the ELBE. On the foundation of the firm I held thirty-three and a third percent of the shares; in 1927, some time before the alleged suicide of my colleague, STABENOW, I acquired another eleven and two-thirds percent, so that my share was forty-five percent. In 1942 I acquired the remaining fifty-five percent and was therefore sole proprietor of the firm.

In 1933 I joined the NSDAP and in the same year became a supporting member of the SS.

Since 1927 Mr WEINBACHER was the Prokurist of the firm. All incoming orders went through his hands, and in my absence, approximately two hundred days a year, he took over the managament [sic] of the firm. Dr. Joachimhans DROSIHN was the biological adviser of the firm. He, too, was travelling most of the time. Mr. ZAUN was the head book-keeper. Mr. SEHM was a book-keeper. He had no reason to wish me ill; on the contrary he should be thankful as I once helped him in a situation.

I kept no ‘black book’ in which I recorded the misdeeds of my employees. Neither did I keep a sealed envelope about Dr. DROSIHN.

I wrote very exact travel reports about my journeys, which on my return I divided evenly over my secretaries for typing. My private secretary was Miss RATOKE; but also Mrs. UENZELMANN and Miss BIAGINI and the others wrote my reports.

I was never told in BERLIN at a conference, or by any other source, that Zyklon B gas should be used against human beings. I mentioned this fact in none of my travel reports and I have never spread no[r] heard such a rumour in my office.

Except Zyklon gas, my firm also supplied circulation plant for gas chambers of 10 cbm size. Chambers of the capacity of more than 50 cbm are not known to me, and therefore I did not know that the SS was our best customer. I also know nothing of the huge deliveries which we made to AUSCHWITZ in the years 1942-43. Since 1943 all orders of state customers went through the Haupt-sanitaetspark, BERLIN. Our firm never supplied the Wirtschafts-Verwaltungs Hauptaert (WVHA) either directly or indirectly. My accounts books were checked by Dr. PLINKER and I only know the yearly and monthly general balance.

Of sales of ZYKLON B to Concentration Camps during 1942 and 1943, extracted from Exhibits HG and HH.

Sworn before me Capt. R.A. Nightingale Int. Corps of No. 2 War Crimes Investigation Team this twenty-eighth day of October 1945.

Return to The Holocaust