Home >  Help with your research > Research guides > Wills and probate before 1858: further research

How to look for records of... Wills and probate before 1858: further research

Use this guide if you have already looked at our guide on Wills or administrations before 1858.

This guide will tell you how to look for other records which include:

You may also wish to look at death duty records. Many people left estates which were liable for death duties. Read our guide Death duties 1796-1903 for information.

Request copies of wills after 1858 from the Probate Service.

Wills were proved by a number of courts. The only probate court records held by The National Archives are those of the Prerogative Court of Canterbury up to 1858.

The Prerogative Court of Canterbury (PCC), which actually sat in London, was the senior church court, and dealt:

From 1653 to 1660, the PCC was the only court to deal with wills and administrations.

Some county record offices have indexed or digitised their own collections, for example Norfolk. Find these via the county pages on GENUKI.

For advice on PROB 6 and PROB 11 records read our introductory guide on Wills or administrations before 1858.

You may need to use indexes in order to locate records.

Records of wills and administrations are scattered. Search our catalogue using the Advanced search option, within department codes PROB and C, by relevant keywords such as:

Refine your search by date. For more guidance on how to search our catalogue, read catalogue search help.

Some are also listed in A list of wills, administrations, etc in the Public Record Office, London, England: 12th-19th century, a copy of which is available at The National Archives.

The National Archives holds copies of many indexes to wills proved in other local courts. See section 4 below.

To search for an administration, you must first consult an index to obtain a year and a folio number, and for later years, a county. There are several indexes, all available and held together in the Open Reading Room, and the one you use is determined by the year in question: 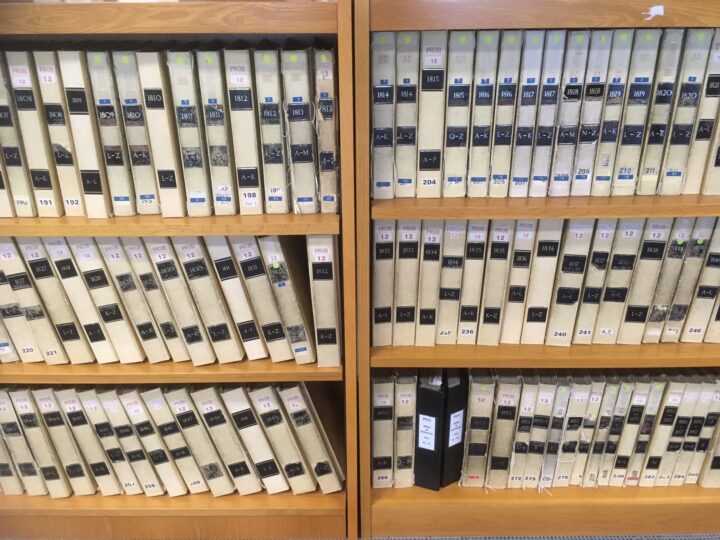 The PROB 12 indexes on the shelves in the Open Reading Room.

The Canterbury Cathedral Archives hold indexes to vacancy wills from 1383 to 1558, compiled by the British Record Society (BRS). Vacancy wills were proved by the Dean and Chapter of Canterbury when the Archbishop’s seat was vacant.

The Society of Genealogists holds the Ledgers of Bank of England will abstracts, 1717 to 1845. Search SoG Data Online (this is a subscription website).

You will find that various online will indexes, abstracts and source documents relating to wills can be found online via Ancestry (£) and Findmypast.co.uk (£).  These include:

Findmypast.co.uk (£) also has Bank of England will extracts. In the early 19th century the Bank of England ruled that a will could be proved in a lower court, but if it involved a transfer of government stock holding the grant of probate had to be made by the Prerogative Court of Canterbury.

The Bank of England kept extracts of the wills in these cases. Search indexes to them at Findmypast (£). They can be a good place to look because they contain some extracts from wills proved in the lower courts as well as those proved in the PCC.

Disputes regarding wills and the settlement of estates could arise over the:

A single will may have led to lawsuits both in Chancery and the Prerogative Court of Canterbury. If there was litigation, additional records will have been created, such as:

You can also search our catalogue by name of deceased for procedural stages of a case. Search within:

Read our guide on Chancery equity suits after 1558 for advice on how to search for cases concerned with the inheritance of property through wills, which were dealt with by Chancery. For a short-cut, look in the death duty registers, which include references to law suits.

6. Inventories and the value of estates

Up to 1782 every executor or administrator was required to send the registry of the court an inventory of the deceased’s goods.

The inventory itemised the estate held by the deceased, including:

Real estate (land) was not normally included in estimates and totals.

Only about 800 pre-1660 inventories have survived. Browse PROB 2 for a list and index of names and places.

For the period 1660-1782, search our catalogue by name of deceased for records of inventories in:

Other records that can indicate the value of a person’s estate are:

Until 1533 the final appeal from the church courts in England and Wales was to the Papal Court in Rome. Consult the calendars of these appeals at The National Archives, Kew.

The functions of the High Court of Delegates were transferred to the Judicial Committee of the Privy Council in 1834. Use the printed Index to locate records:

From 1643 to 1646 some PCC wills were proved in Oxford rather than London.

To view and download those that were proved in Oxford but not London, browse PROB 10/639-642 or search our catalogue using the Advanced search option by name within PROB 10.

Many of these wills were later proved a second time in London (although some where not). Search by name for these at online wills, 1384-1858 (PROB 11).

9. How to find out where a testator died

To identify where a testator: died, browse:

Browse PROB 7 for the PCC’s own records of the letters of administration issued under the seal of the court.

For wills of people living in America but having estates in England and Wales, consult the printed abstracts in American wills and administrations in the Prerogative Court of Canterbury, 1610 to 1857 by P W Coldham, available on Ancestry (charges apply).

An index to wills proved in the Prerogative Court of Canterbury, 1750-1800, by Anthony J Camp

Visit The National Archives’ shop for a range of publications about wills and death records.

Use our library catalogue to find a recommended book list. The books are all available in The National Archives’ reference library.

You may also be able to find them in a local library.

Wills and administrations after 1858

Wills and administrations before 1858