Two popular forms of entertainment during the war were lantern lectures – where images were projected onto a screen to accompany an educational talk – and going to the cinema. There were fears at the beginning of the war that the film industry would not be able to survive, but in fact the cinema was more popular than ever.

As the war progressed, the government realised that lantern lectures and films could be used for official propaganda. The National War Savings Committee created a number of lantern lectures which were shown all over the country, and were well attended. Examples include ‘The Money Behind the Guns’ and ‘The War in the Air’, made in 1917. The lectures aimed to stir up patriotism and encourage people to invest their money in schemes like War Savings Certificates and National War Bonds.

The First World War was the first time that film had been used for propaganda. Before that it had a reputation as a downmarket, although popular, form of entertainment, which many middle-class people considered beneath them.

In 1916 a War Office Cinematograph Committee was set up and operators were sent to combat zones to record events. These were made into newsreels as well as longer features. The government also produced ‘film-tags’. These were short films – usually about two minutes long – for home audiences. They were attached to the end of longer films, and usually carried a message such as ‘Save Coal’ or ‘Buy War Loan’. It was estimated that film-tags were seen by about 10 million people.

Full-length documentaries, such as the War Office film ‘The Battle of the Somme’, made in 1916, raised awareness of the terrible conditions endured by soldiers in a way not possible in any other format. The film was controversial and shocking, but attracted huge audiences – it was estimated to have been viewed by over 10 million people in Britain, and also reached wide audiences in allied and neutral countries.

‘I hate to confess it, but the motion picture is doing more for the Allied cause than any other means of thought transmission. Not everyone reads the newspapers, and those who do forget what they have read, but no one can forget what he has actually seen happen on the screen.’ 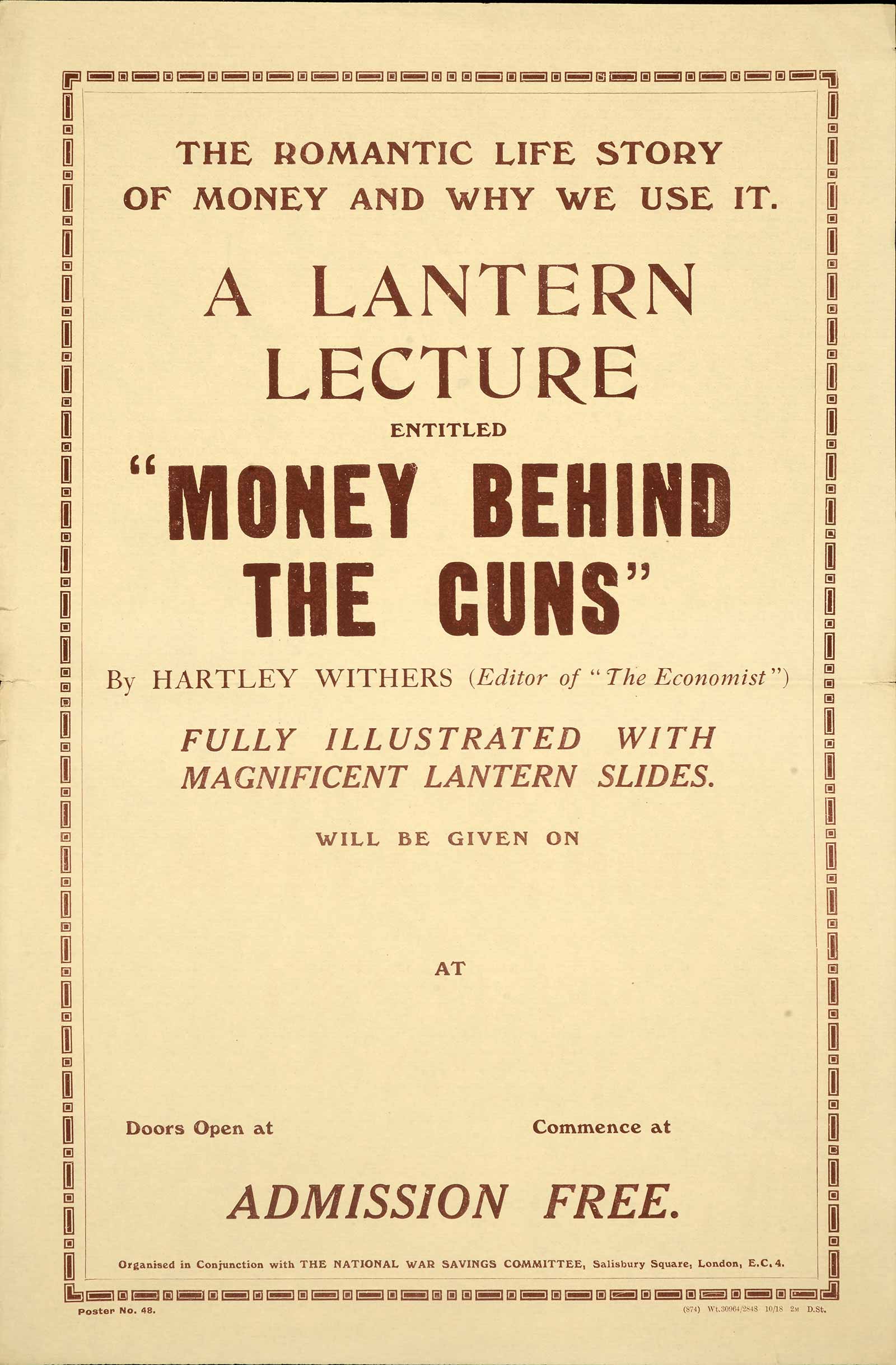 Poster advertising a lantern lecture called ‘The Money Behind the Guns’, made by the National Savings Committee to encourage people to invest in War Savings Certificates and National War Bonds (catalogue reference: NSC 5/784)