In 1914 Portugal was still a new republic, following the departure into exile of King Manuel II in 1910.

Portugal was England’s (and also Britain’s) oldest ally, with a series of unbroken pacts going back to the Treaty of Windsor in 1386 (E 30/310), but because of political unrest, revolution and rapid changes of government, Portugal did not enter the war on the Allied side until 1916.

Although Portugal declared itself as neutral, its President, Manuel de Arriaga, and Prime Minister, Bernardino Machado, immediately entered into negotiations with Great Britain.

Portugal lent 56 field guns to the British Government in September 1914 and Machado and the Portuguese Foreign Minister Alfredo Freire de Andrade visited London in October 1914 and offered to mobilise one division of troops to fight on the Western Front (WO 158/111).

The political situation in Lisbon was extremely tense and a new cabinet was formed in December 1914, which meant that plans for war had to be postponed.

In January 1915 a further regime change resulted in a government led by General Joaquim Pimenta de Castro, who was not in favour of war with Germany. At the same time, Portugal was obliged to send troops into its colonies in Angola in West Africa and Mozambique in East Africa, to repel a German invasion (WO 158/111).

In May 1915, General de Castro’s regime was overthrown and at the end of the month Teófilo Braga was appointed provisional President of the Portuguese Republic. In June the Democratic Party won the new elections and Dr. José de Castro was appointed as Prime Minister.

At the opening of Parliament he announced that the Government was supportive to the Allied cause and on 10th July 1915 a commercial treaty was ratified between Britain and Portugal (WO 158/111).

On 7th August 1915 Bernardino Machado was elected as President and at the end of October further troops were sent to Angola and Mozambique.

The alliance with Britain was vitally important economically and commercially and also helped to prevent Spanish territorial aggression. At the same time, Portugal wanted to prevent a rupture with Germany, which might lead to the loss of its African colonies and the withdrawal of heavy German investment in its banks and commercial enterprises (WO 158/111).

On 15th July 1916 the British Government issued a formal invitation to Portugal to take an active part in the war and on 7 August 1916 the Portuguese parliament officially agreed to send troops to the Western front (FO 371/2761).

A Portuguese Expeditionary Corps was organised, commanded by General Tamagnini de Abreu. There were two divisions totaling 55,000 men including a corps of heavy artillery and a battalion of railway engineers. , . In January 1917 the two divisions arrived at Aire in France to begin training.

The first troops reached the front on 4th April 1917, suffering their first casualties in action on 4th June when they repelled an attack made by the German army around Neuve Chappelle. On 6th November 1917 the Portuguese Expeditionary Corps was given its own sector at the front, under the command of the British First Army (WO 95/5488).

On 9th April 1918, the Second Division of the Portuguese Expeditionary Corps, was attacked by eight German divisions, comprising about 100,000 troops, in what would become known as the battle of the Lys.

The Portuguese forces were already demoralised, since they had not received fresh forces to cover their losses and promised relief from the front had been delayed. (WO 158/710). By midday the Portuguese lines had been completely overrun and 327 officers and 7,098 men were reported as either killed, wounded, missing in action or captured (WO 95/5488).

General Sir Henry Horne, commander of the British First Army, claimed that the Portuguese troops had fled the field of battle (CAB 24/51), but General Tamagnini argued that they had not been sufficiently supported by British First line troops. (WO 95/5488).

The remaining troops of the Second Division were united with their compatriots and placed under the direct command of the British Fifth Army. They continued to fight on the Western Front until the armistice was signed on 11th November 1918 (WO 95/5489).

On 14th December 1918 the President of Portugal, Sidonio Pais, was assassinated and the Portuguese government was replaced by his Navy Minister, Admiral Joao de Canto e Castro (FO 371/3376). After several calls for Portuguese troops to be allowed to return home, they were eventually repatriated in April 1919. 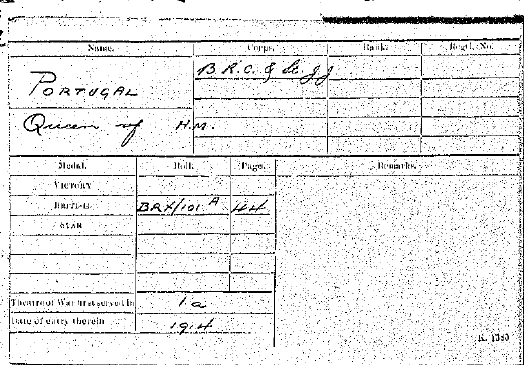 Portugal was represented by four delegates at the Paris Peace Conference, led initially by Professor Egas Moniz and from 12th March 1919 by former president Afonso Costa (FO 608/150/16). Portuguese delegates sat on numerous commissions, including the Reparations Commission, the Financial Commission and the League of Nations Commission.

Portugal’s main aim was to secure its African territories of Angola and Mozambique. Its major success was in obtaining agreement for Germany to cede the port of Kionga, which lay between German East Africa and Portuguese East Africa and which provided an important trade route to Mozambique, known as the Kionga Triangle (FO 608/219).