For a couple of months now, I’ve been on a virtual writing residency at The National Archives. My hosts are very supportive and have seen me on my way to creating a historical radio play out of the digitised documents available on the website.

My process began with looking through the entirety of the ‘Workhouse Voices’ resource, having been curious about 19th-century poverty. Getting to access letters written by paupers from up to 200 years ago is a remarkable thing.

I was instantly drawn to expressive complaints throughout the MH/12 collection and started to pick up on grim patterns, such as where the poor would compare their treatment in the workhouse to that of animals – ‘No men but mad men would trust [them] with a kennel of dogs’. I didn’t require prior experience with archives or even of handling the documents in person to become immersed in their stories.

My secondary research traced the roots of British Poor Laws back through history, cycling from the Victorian into the Elizabethan era, all the way back to the first ever labour legislation … in the 1300s! It was tough, all in one go, to learn about centuries of hardship kept going by ugly attitudes to the poor.

I started to fret about how to end such a tragic story, until I figured that, given the plight of the paupers was so terrible, it was even more astounding that they continued to demand for natural justice everywhere in those original letters. I decided to make these moments of defiance the basis of my play.

This was where I met the research team ‘In their Own Write’ for whom the MH/12 collection (of 12,000 pauper letters!) has formed their archive base, and who were keen for someone to dramatise the documents they are so familiar with. Picking their exceptional brains and foraging through the archives has finally brought me to the radio play ‘Your Unfortunate Servants’.

There is more than enough in the collection to write a whole series, but this story is based around Cardiff Union in 1855. You can read one of the letters which directly inspired it here: MH 12/16250. In the play, the new Master and Miss have taken too many liberties for the paupers to put up with – ‘All I can tell you is this, we are a company of us, if there is not something done very shortly, down comes the house’! 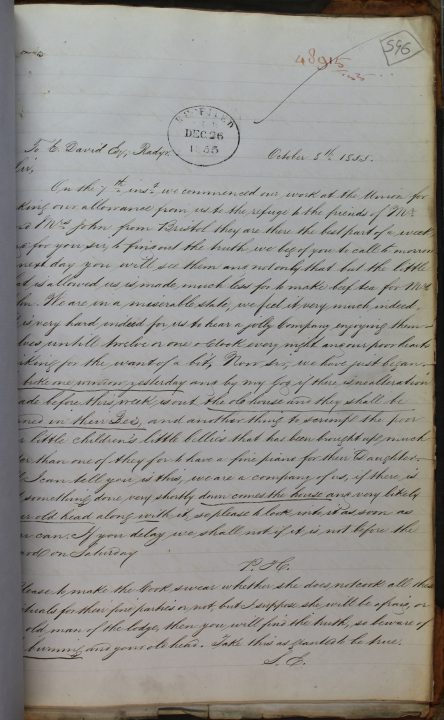 Read a transcript of this document