‘sell clothing of the union’ 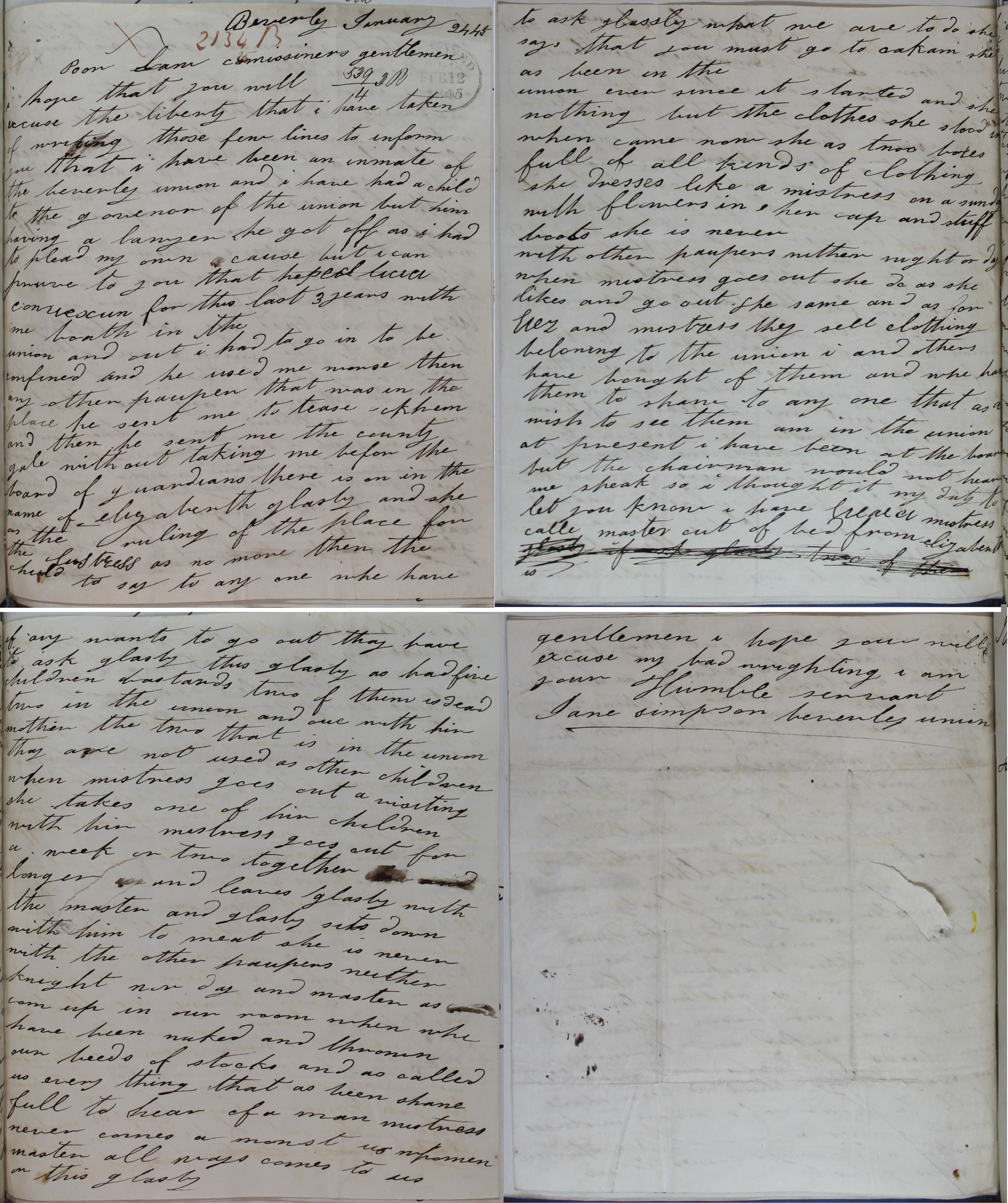 Picking oakum was used as a punishment in workhouses and prisons as a form of hard labour. Heavy rope, cut up into lengths was hit with a hammer to remove the hard tar that coated it.

Poor Law Commissioners, gentlemen, I hope that you will excuse the liberty that I have taken of writing these few lines to inform you that I have been an inmate of the Beverley Union and I have had a child by the Governor of the Union, but him having a lawyer, he got off as I had to plead my own cause but I can prove to you that connection. For the last 3 years with me both in the union and out I had to go in to be confined [give birth] and he used me [worse] than any other pauper that was in the place. He sent me to tease oakum and then he sent me the county goal without taking me before the board of guardians. There is [one] in the name of Elizabeth Glassby and she as the ruling of the place for the [mistress] since being a child. Everyone has to ask Glassby what we are to do, she says that you must do oakum picking. She has been in the union ever since it started and she nothing but the clothes she stood in when came, now she as two boxes full of all kinds of clothing. She dresses like a mistress on a [Sunday] with flowers in her cap and stuff boots. She is never with other paupers either night or day when mistress goes out, she does as she likes and goes out the same … and mistress they sell clothing belonging to the union… I have been at the board but the chairman would not hear me speak,  so I thought it my duty to let you know I have [heard] mistress call the master out of bed from Elizabeth, if …[anyone] wants to go out they have to ask Glassby. This Glassby as had five children bastards, two of them died, two are in the union and one with his mother. The two that is in the union, they are not used as other children. When mistress goes out a visiting she takes one of his children with him, mistress goes out for a week or two together and longer and leaves Glasby with the Master and Glasby sits down with him to eat. She is never with the other paupers neither night nor day and the master has come up in our room when we have been naked and taken off our head scarves and called us everything that has been shameful to hear from a man. The mistress never comes among us women. Master always comes to us or this Glassby. Gentlemen, I hope you will excuse my bad writing, I am your Humble servant, Jane Simpson, Beverley Union.