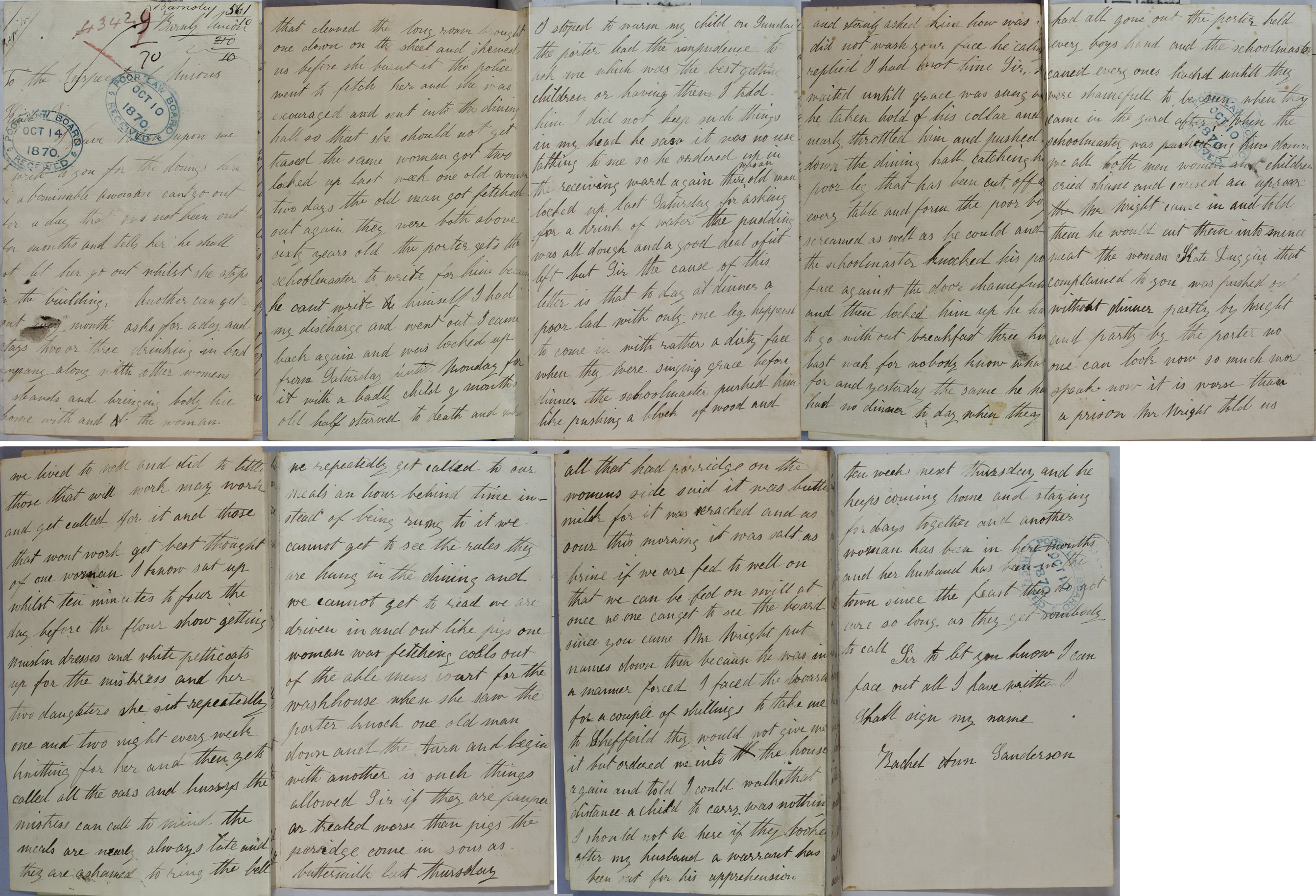 Long letter of complaint about conditions in the workhouse, including the lack of freedom, harsh treatment, terrible food, and exploitation, 10 October 1870, Catalogue ref: MH12/14683.

To the Inspector of Unions

I have taken it upon myself [to tell you, for the goings on here] are abominable. A woman can’t go out for a day, who has not been out for months and tells her [that] he shall not let her go out whilst she stops in the building.

Another [woman] can get out every month [and] asks for a day and stays two or three drinking in bad company along with other women …    [A] woman got two [people] locked up last week: one old woman [for] two days, the old man got fetched out again. They were both above sixty years old, the porter gets the schoolmaster to write for him because he can’t write himself. I had my discharge and went out, I came back again and was locked up from Saturday until Monday for it. With a poorly child of 9 months old, half starved to death and when I stopped to [see] my child on Sunday, the parties had the impudence to ask me which was the best [thing] getting children or having them. I told him I did not keep such things in my head he [said] it was no use talking to me so he ordered [me] up in the receiving ward. Again there was an old man locked up last Saturday for asking for a drink of water.

The pudding was all dough and a good deal of it left but sirs the cause of this letter is that today [at] dinner a poor law [inmate] with only one leg happened to come in with a rather dirty face when they were saying grace before dinner, the schoolmaster pushed him like pushing a block of wood and sternly asked him how was [it that he] did not wash [his] face? He [calmly] replied I had not time Sir. [The schoolmaster] waited until grace was sung and he taken hold of his collar and nearly throttled him and pushed [him] down the dining hall catching [the] poor man whose leg that has been cut off [at] every table and form [bench].

The poor boy screamed as well as he could and the schoolmaster knocked his poor face against the door shamefully and then locked him up. He had to go without breakfast three times last week nobody knows what for and yesterday the same [thing]. He [had] had no dinner today. When they had all gone out, the porter held every boys’ hand and the schoolmaster caned everyone’s hand until they were shameful to be seen. When they came in the yard after, when the schoolmaster was pushing him down, both men women and children cried shame and caused an uproar. Mr Wright came in and told them he would cut them into mincemeat.

The woman Kate Duggin that complained to you was pushed out without dinner, partly by Wright and partly by the porter … Now it is worse than a prison. Mr Wright told us we lived too well and did too little. Those that will work may work and get called for it and those that won’t work get best thought of. One woman I know sat up whilst ten minutes to four the day before the flower show [sewing] muslin dresses and a white petticoat up for the mistress and her two daughters. She sat repeatedly one or two night every week knitting for her and then got called names by the mistress.

The meals are nearly always late and they are ashamed to ring the bell.  We repeatedly get called to our meals an hour behind time instead of being rung to it.  We cannot get to see the rules [of the workhouse] they are hung in the dining and we cannot get to read. We are driven in and out like pigs. One woman was fetching coals out of the men’s court for the washhouse when she saw the porter knock one old man down … and begin with another. Are such things allowed Sir?  If they are paupers [they are] treated worse than pigs, the porridge comes in sour as buttermilk. Last Thursday all that had porridge on the women’s side said it was butter milk, for it was racked and as sour this morning it was salt as brine [like salt water]. If we are fed too well on that, we can be fed on swill [pig’s food] at once.  No one can get to see the board [Guardians] since you came. Mr Wright put names down then because he was in a manner forced. I faced the board for a couple of shillings to take me to Sheffield they would not give me, it but ordered me into the [workhouse] again and told [me] I could walk that distance…I should not be here if they [looked] after my husband, a warrant has been out for his apprehension … he keeps coming home and staying for days together…

Sir, to let you know I can face out [prove] all I have written I shall sign my name