Extracts from an article about trouble in Manchester and its surroundings in ‘The Preston Chronicle and Lancashire Advertiser’, 13 August, 1842, Catalogue ref: HO 45/249A f28 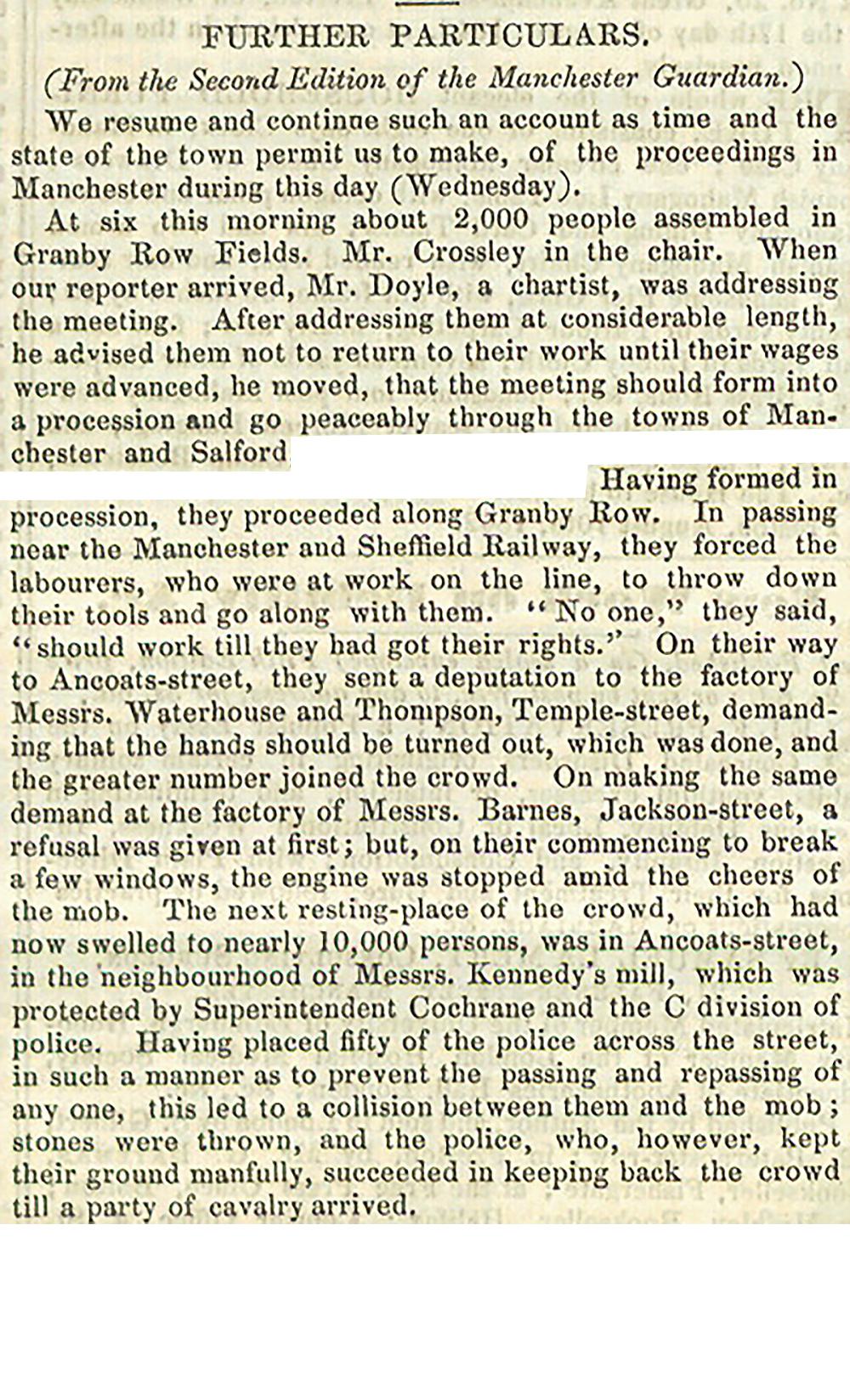 Further Particulars
(From the Second edition of the Manchester Guardian)
We resume and continue such an account as time and the state of the town permit us to make, of the proceedings in Manchester during this day (Wednesday).
At six this morning about 2,000 people assembled in Granby Row Fields. Mr. Crossley in the chair. When our reporter arrived, Mr. Doyle, a chartist, was addressing the meeting. After addressing them at considerable length, he advised them not to return to their work until their wages were advanced, he moved, that the meeting should form into a procession and go peaceably through the towns of Manchester and Salford
…
Having formed in procession, they proceeded along Granby Row. In passing near the Manchester and Sheffield Railway, they forced the labourers, who were at work on the line, to throw down their tools and go along with them. “No one,” they said, “should work till they had got their rights.” On their way to Ancoats-street, they sent a deputation to the factory of Messrs. Waterhouse and Thompson, Temple-street, demanding that the hands should be turned out, which was done, and the greater number joined the crowd. On making the same demand at the factory of Messrs. Barnes, Jackson-street, a refusal was given at first; but, on their commencing to break a few windows, the engine was stopped amid the cheers of the mob. The next resting-place of the crowd, which had now swelled to nearly 10,000 persons, was in Ancoats-street, in the neighbourhood of Messrs. Kennedy’s mill, which was protected by Superintendent Cochrane and the C division of police. Having placed fifty of the police across the street, in such a manner as to prevent the passing and repassing of any one, this led to a collision between them and the mob; stones were thrown, and the police, who, however, kept their ground manfully, succeeded in keeping back the crowd till a party of cavalry arrived.
…


« Return to What was Chartism?

A ‘turn out’ meant the turning workers out of the factories, stopping their work, and marching through the streets.