Home >  Education > Classroom resources > What was Chartism? > Political and social reform in 19th century Britain – Source 4b (i)

Extracts from an article about trouble in Manchester and its surroundings in ‘The Preston Chronicle and Lancashire Advertiser’, 13 August, 1842, Catalogue ref: HO 45/249A f28 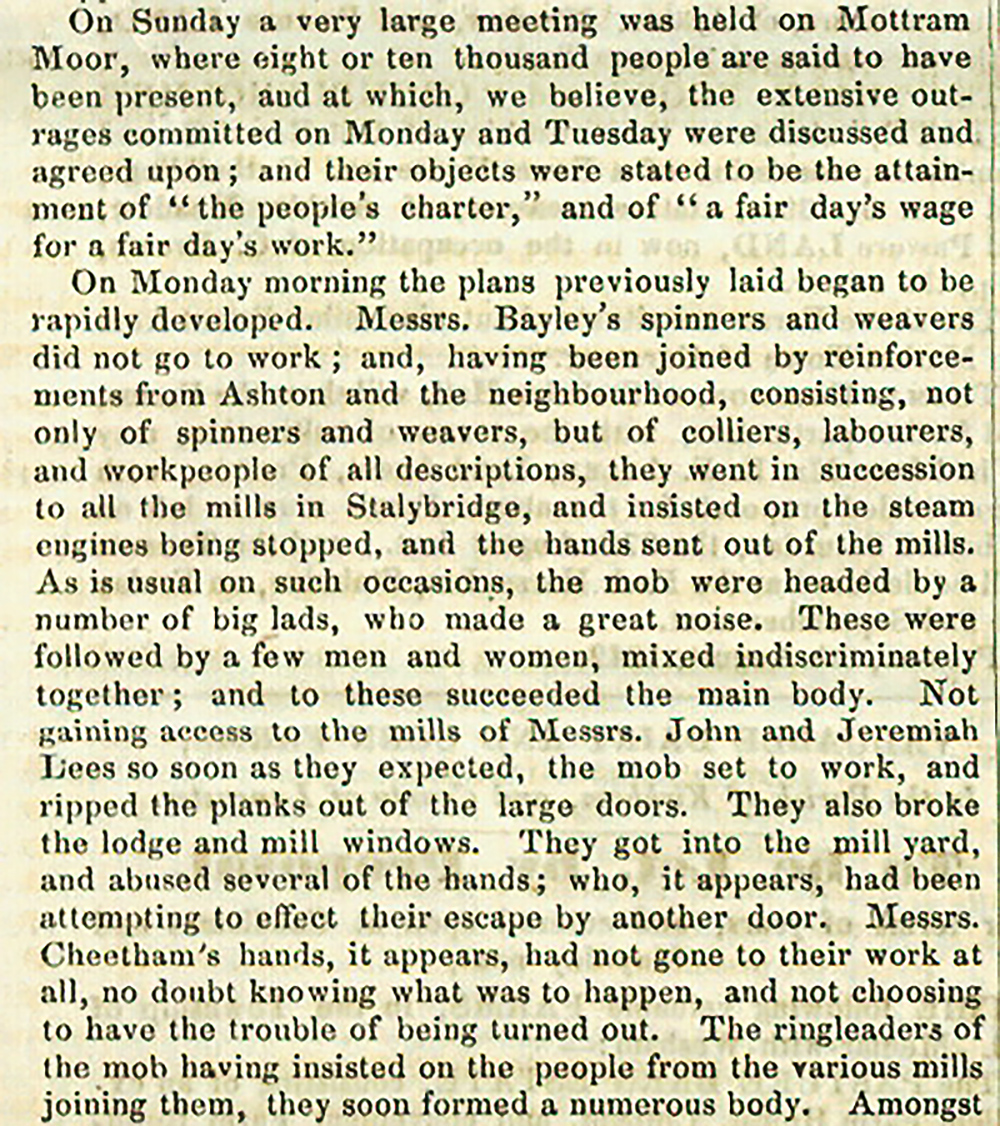 On Sunday a very large meeting was held on Mottram Moor, where eight or ten thousand people are said to have been present, and at which, we believe, the extensive outrages committed on Monday and Tuesday were discussed and agreed upon; and their objects were stated to be the attainment of “the people’s charter,” and of “a fair day’s wage for a fair day’s work.”
On Monday morning the plans previously laid began to be rapidly developed. Messrs. Bayley’s spinners and weavers did not go to work; and, having been joined by reinforcements from Ashton and the neighbourhood, consisting, not only of spinners and weavers, but of colliers, [person who digs/ transports coal] labourers, and workpeople of all descriptions, they went in succession to all the mills in Stalybridge, and insisted on the steam engines being stopped, and the hands sent out of the mills. As is usual on such occasions, the mob were headed by a number of big lads, who made a great noise. These were followed by a few men and women, mixed indiscriminately together; and to these succeeded the main body. Not gaining access to the mills of Messrs. John and Jeremiah Lees so soon as they expected, the mob set to work, and ripped the planks out of the large doors. They also broke the lodge and mill windows. They got into the mill yard, and abused several of the hands; who, it appears, had been attempting to affect their escape by another door. Messrs. Cheetham’s hands, it appears, had not gone to their work at all, no doubt knowing what was to happen, and not choosing to have the trouble of being turned out. The ringleaders of the mob having insisted on the people from the various mills joining them, they soon formed a numerous body. …

« Return to What was Chartism?

A ‘turn out’ meant the turning workers out of the factories, stopping their work, and marching through the streets.