The Derby is a horse race held each year at Epsom. Suffragist is a term used to describe someone who wants political voting rights given to more people, in this case to women. 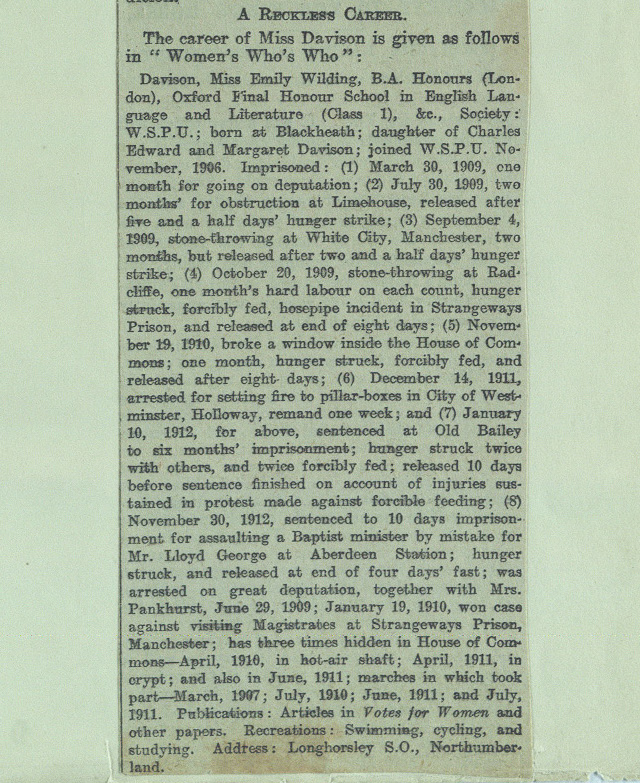 The career of Miss Davison is given as follows in “Women’s Who’s Who”:

Imprisoned: (1) March 30, 1909, one month for going on deputation;
(2) July 30, 1909, two months’ for obstruction [blocking] at Limehouse, released after five and a half days’ hunger strike;
(3) September 4, 1909, stone-throwing at White City, Manchester, two months, but released after two and a half days’ hunger strike;
(4) October 20, 1909, stone-throwing at Radcliffe, one month’s hard labour on each count, hunger struck, forcibly fed, hose-pipe incident in Strangeways prison and released at end of eight days;
(5) November 19, 1910, broke a window inside the House of Commons; one month, hunger struck, forcibly fed, and released after eight days;
(6) December 14, 1911, arrested for setting fire to pillar-boxes in City of Westminster; Holloway, remand one week; and
(7) January 10, 1912, for above, sentenced at Old Bailey to six months’ imprisonment; hunger struck twice with others, and twice forcibly fed; released 10 days before sentence finished on account of injuries sustained in protest made against forcible feeding;
(8) November 30, 1912, sentenced to 10 days imprisonment for assaulting a Baptist Minister by mistake for Mr. Lloyd George at Aberdeen Station; hunger struck, and released at end of 4 days’ fast; was arrested on great deputation, together with Mrs. Pankhurst, June 29, 1909; January 19, 1910, won case against visiting Magistrates at Strangeways Prison, Manchester; has three times hidden in House of Commons – April, 1910, in hot-air shaft; April, 1911, in crypt; and also in June, 1911; marches in which took part – March, 1907; July, 1910; June, 1911; and July, 1911.

Publications: Articles in ‘Votes for Women’ and other papers.