Page 2 out of 2. A leaflet from the Women’s Social and Political Union describing the force-feeding of suffragettes at Walton Gaol, Liverpool, December 1909, Catalogue ref: HO 144/1052/187234) 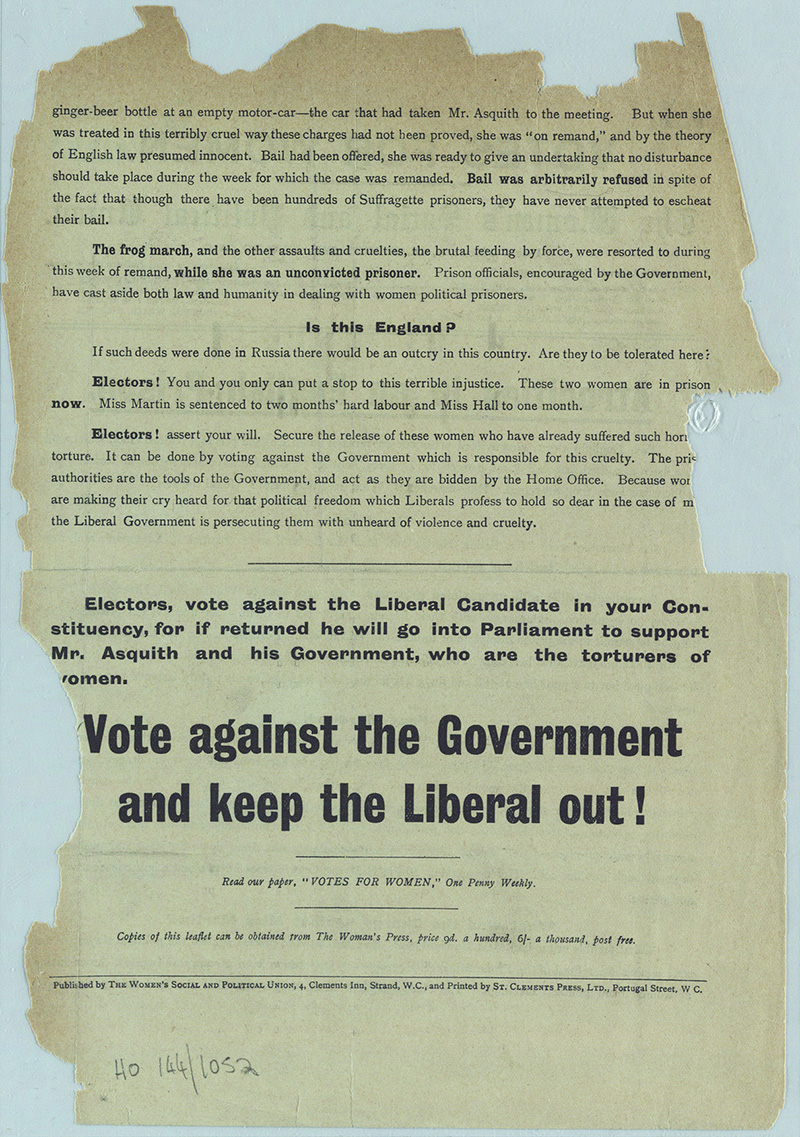 ginger-beer bottle at an empty motor car that had taken Mr. Asquith to the meeting. But when she was treated in this terribly cruel way these charges had not been proved, she was “on remand,” and by the theory of English law presumed innocent. Bail had been offered, she was ready to give an undertaking that no disturbance should take place during the week for which the case was remanded. Bail was arbitrarily [decided for no reason] refused in spite of the fact that though there have been hundreds of Suffragette prisoners, they have never attempted to escheat [forfeit/lose] their bail.

The frog march, and the other assaults and cruelties, the brutal feeding by force, were resorted to during this week of remand, while she was an unconvicted prisoner. Prison officials, encouraged by the Government, have cast aside both law and humanity in dealing with women political prisoners.

If such deeds were done in Russia there would be an outcry in this country. Are they to be tolerated here?

Electors! You and you only can put a stop to this terrible injustice. These two women are in prison now. Miss Martin is sentenced to two months’ hard labour and Miss Hall to one month.

Electors! Assert your will. Secure the release of these women who have already suffered such horrible torture. It can be done by voting against the Government which is responsible for this cruelty. The prison authorities are the tools of the Government, and act as they are bidden by the Home Office. Because women are making their cry heard for that political freedom which Liberals profess [claim] to hold so dear in the case of … [document damaged] the Liberal Government is persecuting them with unheard of violence and cruelty.

Electors, vote against the Liberal Candidate in your Constituency, for if returned he will go into Parliament to support Mr. Asquith and his Government, who are the torturers of women.

Vote against the Government and keep the Liberal out!