Extracts from ‘The Bristol Gazette’ - Sources 3a & 3b

According this newspaper, there were 8 inquests into why people died during the riot ‘of which two died by excessive drinking, four were burnt in the Square, and two were shot. A very great number must have lost their lives, of which we can obtain no account’. 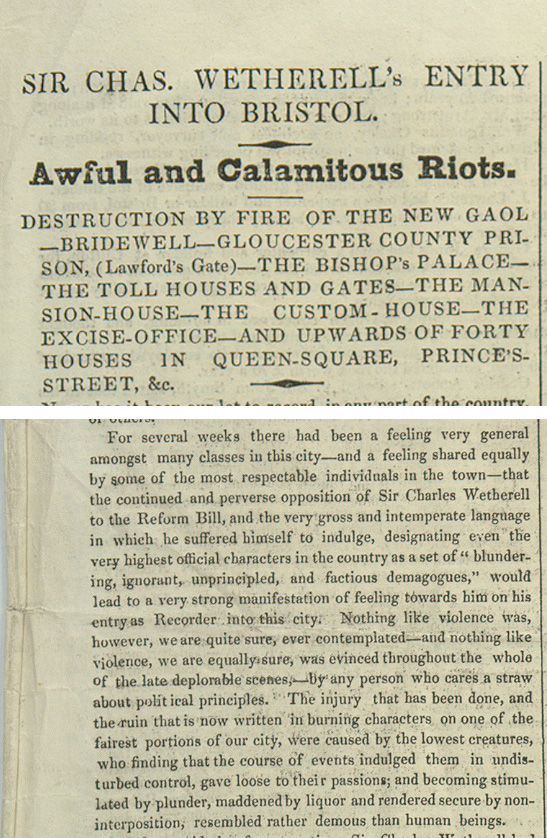 For several weeks there had been a feeling very general amongst many classes in this city – and a feeling shared equally by some of the most respectable individuals in the town – that the continued and perverse [stubborn] opposition of Sir Charles Wetherell to the Reform Bill, and the very gross and intemperate language [offensive language] in which he suffered himself to indulge, designating even the very highest official characters in the country as a set of “blundering, ignorant, unprincipled, and factious demagogues [leaders who appeal to emotion and prejudice],” would lead to a very strong manifestation [display] of feeling towards him on his entry as Recorder [job as senior judge] into this city. Nothing like violence was, however, we are quite sure, ever contemplated – and nothing like violence, we are equally sure, was evinced [shown] throughout the whole of the late deplorable scenes; – by any person who cares a straw about political principles. The injury that has been done, and the ruin that is now written in burning characters on one of the fairest portions of our city, were caused by the lowest creatures, who finding that the course of events indulged them in undisturbed control, gave loose to their passions; and becoming stimulated by plunder, maddened by liquor and rendered secure [made safe] by non-interposition [lack of anyone intervening], resembled rather demons than human beings.

Read these extracts from ‘The Bristol Gazette’ newspaper.