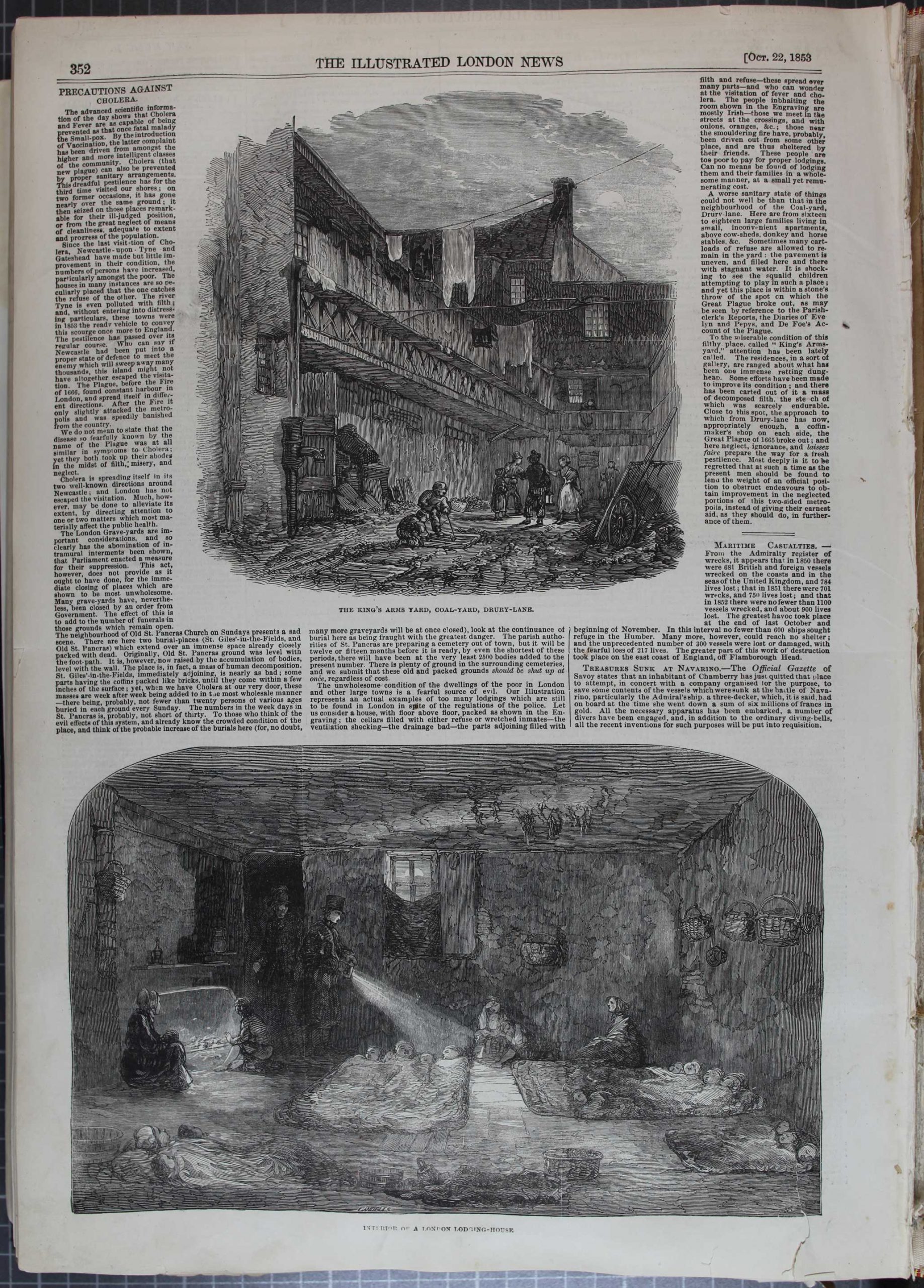 The article and illustrations, link poor housing, overcrowding, the state of city graveyards, the accumulation of rubbish and filth as essential factors in the spread of cholera.

The advanced scientific information of the day shows that Cholera and fever are as a capable of being prevented as that once fatal malady, smallpox. By the introduction of Vaccination, the latter complaint has been driven from amongst the higher and more intelligent classes of the community. Cholera (that new plague) can also be prevented by proper sanitary arrangements. This dreadful pestilence has for the third time visited our shores; on two former occasions, it has gone nearly over the same ground; it the seized on those places remarkable for their ill-judged position, or from the great neglect of means of cleanliness, adequate to extent and progress of the population.

Since the visitation of the cholera, Newcastle-upon-Tyne and Gateshead have made but little improvement in their condition, the numbers of persons have increased, particularly amongst the poor. The houses in many instances are so peculiarly placed that the one catches the refuse of the other. The river Tyne is even polluted with filth, and without entering into distressing particulars, these towns were in 1853 the ready vehicle to convey this scourge one more to England. The pestilence has passed over its regular course. Who can say if Newcastle had been put into a proper state to meet the enemy which will sweep away many thousands, this island might not might not altogether have escaped the visitation. The Plague, before the Fire of 1666, found constant harbour in London, and spread itself in different directions. After the Fire it only slightly attacked the metropolis and was speedily banished from the country.

We do not mean to state that the disease so fearfully know by the name of the Plague was at all similar in symptoms of Cholera; yet they both took up their abode in the midst of filth, misery, and neglect.

Cholera is spreading itself in its two well-known directions around Newcastle; and London has not escaped the visitation. Much, however, may be done to alleviate its extent, by directing attention to one or two matters which most materially affect the public health.

The London Grave-yards are important considerations, and so clearly has the abomination [horror] of intramural interments [burying inside churches] been shown, that Parliament enacted a measure for their suppression. This Act, however, does not provide as it ought to have done, for the immediate closing of places which are shown to be most unwholesome. Many grave-yards have, nevertheless, been closed by an order from the Government. The effect of this is to add to the number of funerals in those grounds which remain open.

The neighbourhood of Old St Pancras Church on Sundays presents a sad scene. There are here two burial grounds (St. Giles-in-the-Fields, and Old St. Pancras) which extend over an immense space already closely packed with dead. Originally, Old St. Pancras ground was level with the foot-path. It is, however, now raised by the accumulation of bodies, level with the wall. The place is, in fact, a mass of human decomposition. St. Giles’-in-the Fields, immediately adjoining, is nearly as bad; some parts having the coffins packed like bricks, until they come within a few inches of the surface; yet when we have Cholera at our very door, these masses are week after week being added to in the most unwholesome manner—there being, probably, not fewer than twenty persons of various ages buried in each ground every Sunday. The numbers in the week days in St Pancras is not short of thirty. To those who think of the evil effects of this system, and already know he crowded condition of the place, and think of the probable increase of the burials here (for, no doubt, many more graveyards will be at once closed), look at the continuance of the burial here as being fraught with the greatest danger, The parish authorities of St Pancras are preparing a cemetery out of town, but it will be twelve or fifteen months before it is ready, by even the shortest of these periods, there will have be at the very least 2500 bodies added to the present number. There is plenty of ground in the surrounding cemeteries and we submit that these old and packed grounds should be shut up at once, regardless of cost.

The unwholesome conditions of the dwellings of the poor in London and other large towns is a fearful source of evil. Our illustration represents an actual example of too many lodgings which are still to be found in London in spite of the regulations of the police. Let us consider a house, with floor above, packed as shown in the Engraving; the cellars filled with either refuse or wretched inmates-the ventilation shocking- the drainage bad- the parts adjoining filled with filth and refuse-these spread over many parts-and who can wonder at the visitation of fever and cholera. The people inhabiting the room shown in the Engraving are mostly Irish-those we meet in the streets at the crossings, and with onions, oranges, etc.; those near the smouldering fire have, probably, been driven out from some other place, and are thus sheltered by their friends. These people are too poor to pay for proper lodgings. Can no means be found of lodging them and their families in a wholesome manner, at a small remunerating cost?

A worse sanitary state of things could not well be than that in the neighbourhood of the Coal-yard, Drury Lane. Here are from sixteen to eighteen large families living in small, inconvenient apartments, above cow-sheds, donkey and horse stables etc. Sometimes many cartloads of refuse are allowed to remain in the yard; the pavement is uneven, and filled here and there with stagnant water. It is shocking to see the squalid children attempting to play in such a place; and yet this place is within a stone’s throw of the spot on which the Great Plague broke out, as may be seen by reference to the Parish Clerk’s Reports, the Diaries of Evelyn and Pepys, and De Foe’s Account of the Plague.

To the miserable condition of this filthy place called “Kings Arms-yard”, attention has been lately called. The residences, in a sort of gallery, are ranged about what has been one immense retting dung-heap. Some efforts have been made to improve its condition; and there has been carted-out of it a mass of decomposed filth, the stench of which was scarcely endurable. Close to this spot, the approach to which was from Drury-lane has now, appropriately enough, a coffin-makers shop on each side, the Great Plague of 1665 broke out; and here neglect, ignorance, and laissez faire* prepare the way for a fresh pestilence. Most deeply is it to be regretted that at such a time as the present men should be found to lend the weight of an official position to obstruct endeavours to obtain improvement in the neglected portions of this two-sided metropolis, instead of giving their earnest aid, as they should do, in furtherance of them.

*This means leaving things to take their own course. Laissez faire in economic terms meant that a government chose not to interfere in the workings of the free market and business.