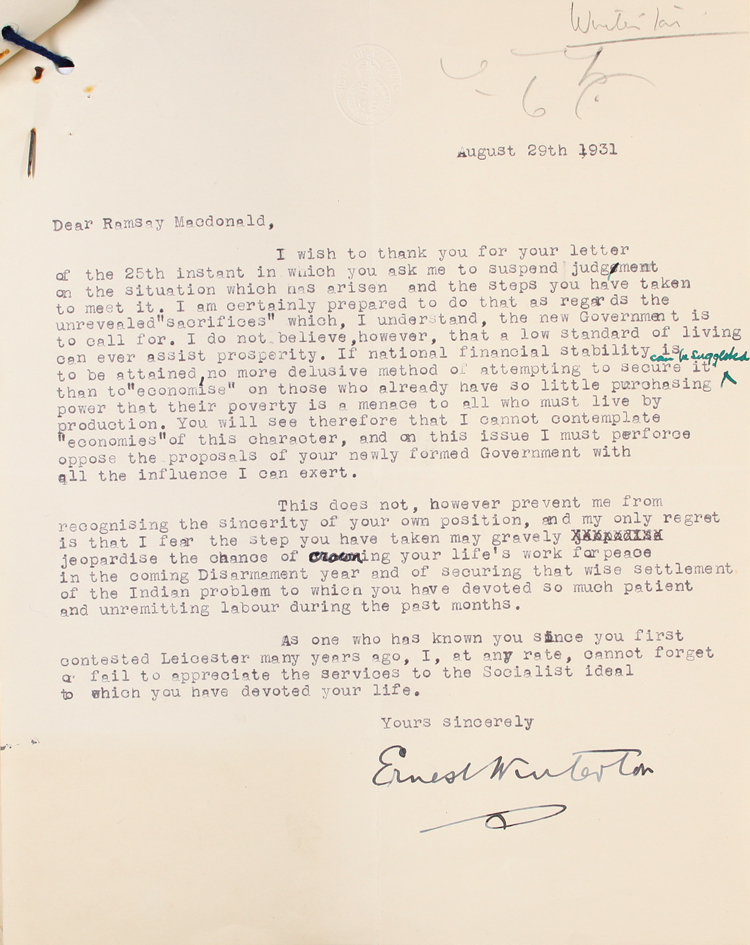 MacDonald had resigned as Labour Prime Minister five days earlier and was attempting to form a new National Government.

I wish to thank you for your letter of the 25th instant in which you ask me to suspend judgement on the situation which has arisen and the steps you have taken to meet it. I am certainly prepared to do that as regards the unrevealed “sacrifices” which, I understand, the new Government is to call for. I do not believe, however, that a low standard of living can ever assist prosperity. If national financial stability is to be attained, no more delusive method of attempting to secure it [can be suggested] than to “economise” on those who already have so little purchasing power that their poverty is a menace to all who must live by production. You will see therefore that I cannot contemplate “economies” of this character, and on this issue I must perforce oppose the proposals of your newly formed Government with all the influence I can exert.

This does not prevent me from recognising the sincerity of your own position, and my only regret is that I fear the step you have taken may gravely jeopardise the chances of crowning your life’s work for peace in the coming Disarmament year and of securing that wise settlement of the Indian Problem to which you have devoted so much patient and unremitting labour during the past months.

As one who has know you since you first contested Leicester many years ago, I, at any rate, cannot forget or fail to appreciate the services to the Socialist ideal to which you have devoted your life.