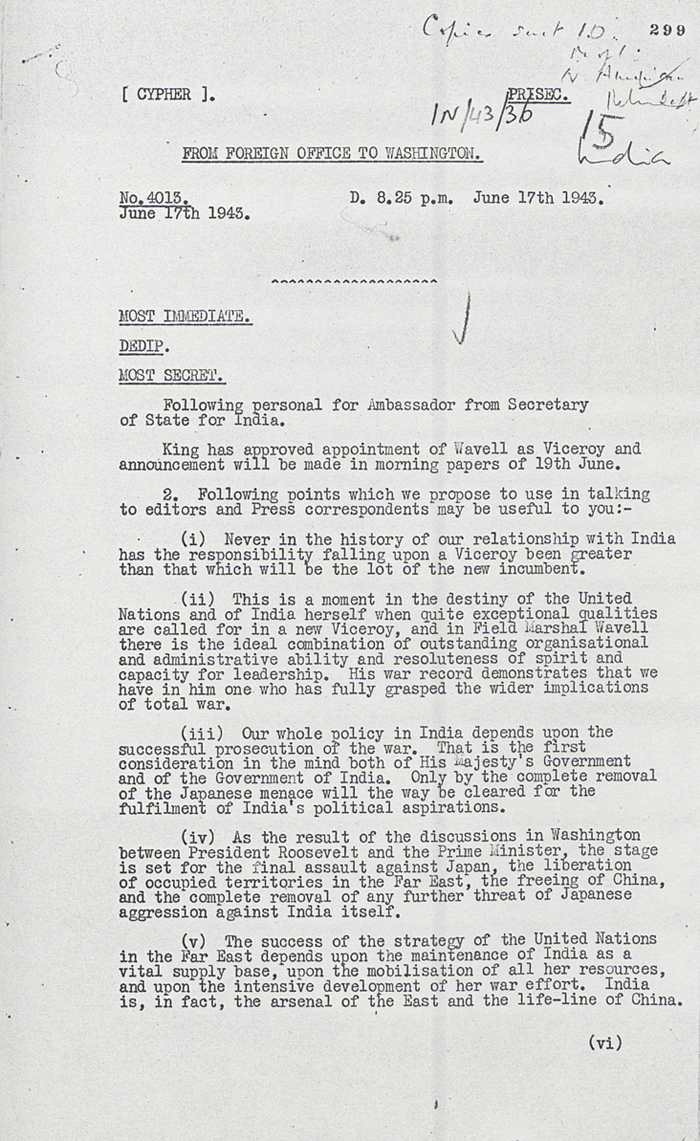 Telegram from Foreign Office to British Embassy Washington on the appointment of General Wavell as Viceroy of India, 17th June 1945 (FO 954/12B)

FROM FOREIGN OFFICE TO WASHINGTON.

MOST IMMEDIATE.
DEDIP.
MOST SECRET.

Following personal for Ambassador from Secretary of State for India.

King has approved appointment of Wavell as Viceroy and announcement will be made in morning papers of 19th June.

2. Following points which we propose to use in talking to editors and Press correspondents may be useful to you:-

(i) Never in the history of our relationship with India has the responsibility falling upon a Viceroy been greater than that which will be the lot of the new incumbent.

(ii) This is a moment in the destiny of the United Nations and of India herself when quite exceptional qualities are called for in a new Viceroy, and in Field Marshal Wavell there is the ideal combination of outstanding organisational and administrative ability and resoluteness of spirit and capacity for leadership. His war record demonstrates that we have in him one who has fully grasped the wider implications of total war.

(iii) Our whole policy in India depends upon the successful prosecution of the war. That is the first consideration in the mind both of His Majesty’s Government and of the Government of India. Only by the complete removal of the Japanese menace will the way be cleared for the fulfilment of India’s political aspirations.

(iv) As the result of the discussions in Washington between President Roosevelt and the Prime minister, the stage is set for the final assault against Japan, the liberation of occupied territories in the Far East, the freeing of China, and the complete removal of any further threat of Japanese aggression against India itself.

(v) The success of the strategy of the United Nations in the Far East depends upon the maintenance of India as a vital supply base, upon the mobilisation of all her resources, and upon the intensive development of her war effort. India is, in fact, the arsenal of the East and the life-line of China.