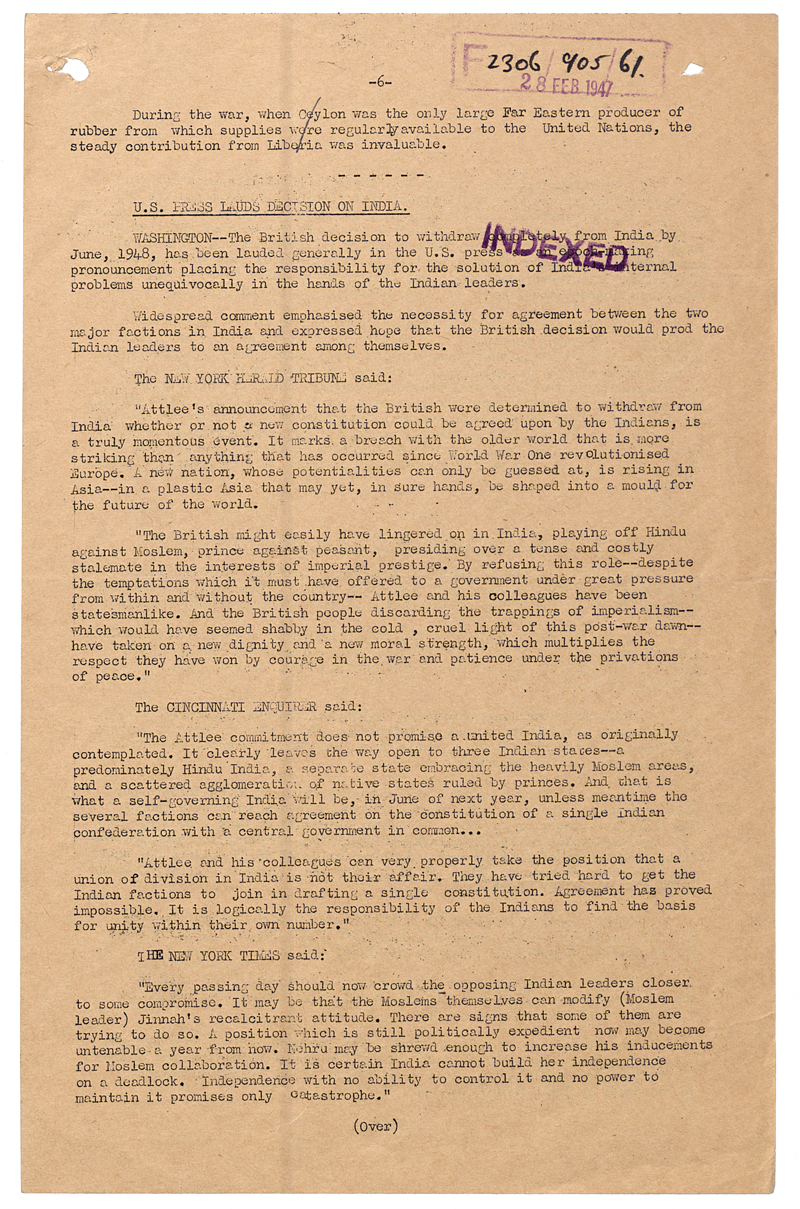 WASHINGTON –The British decision to withdraw completely from India by June, 1948, has been lauded generally in the U.S. press as an epoch-making pronouncement placing the responsibility for the solution of India’s internal problems unequivocally in the hands of the Indian leaders.

Widespread comment emphasised the necessity for agreement between the two major factions in India end expressed hope that the British decision would prod the Indian leaders to an agreement among themselves.

“Attlee’s announcement that the British were determined to withdraw from India whether or not a new constitution could be agreed upon by the Indians, is a truly momentous event. It marks a breach with the older world that is more striking than anything that has occurred since World War One revolutionised Europe. A new nation, whose potentialities can only be guessed at, is rising in Asia–in a plastic Asia that may yet, in sure hands, be shaped into a mould for the future of the world.

“The British might easily have lingered on in India, playing off Hindu against Moslem, prince against peasant, presiding over a tense and costly stalemate in the interests of imperial prestige. By refusing this role—despite the temptations which it must have offered to a government under great pressure from within and without the country–Attlee and his colleagues have been statesmanlike. And the British people discarding the trappings of imperialism–which would have seemed shabby in the cold , cruel light of this post-war dawn–have taken on a new dignity and a new moral strength, which multiplies the respect they have won by courage in the war and patience under the privations of peace.”

“The Attlee commitment does not promise a united India, as originally contemplated. It clearly leaves the way open to three Indian states–a predominately Hindu India, a separate state embracing the heavily Moslem areas, and a scattered agglomeration of native states ruled by princes. And that is what a self-governing India will be, in June of next year, unless meantime the several factions can reach agreement on the constitution of a single Indian confederation with a central government in common…

“Attlee and his colleagues can very properly take the position that a union of division in India is not their affair. They have tried hard to get the Indian factions to join in drafting a single constitution. Agreement has proved impossible. It is logically the responsibility of the Indians to find the basis for unity within their own number.”

“Every passing day should now crowd the opposing Indian leaders closer to some compromise. It may be that the Moslems themselves can modify (Moslem leader) Jinnah’s recalcitrant attitude. There are signs that some of them are trying to do so. A position which is still politically expedient now may become untenable a year from now. Nehru may be shrewd enough to increase his inducements for Moslem collaboration. It is certain India cannot build her independence on a deadlock. Independence with no ability to control it and no power to maintain it promises only catastrophe.”