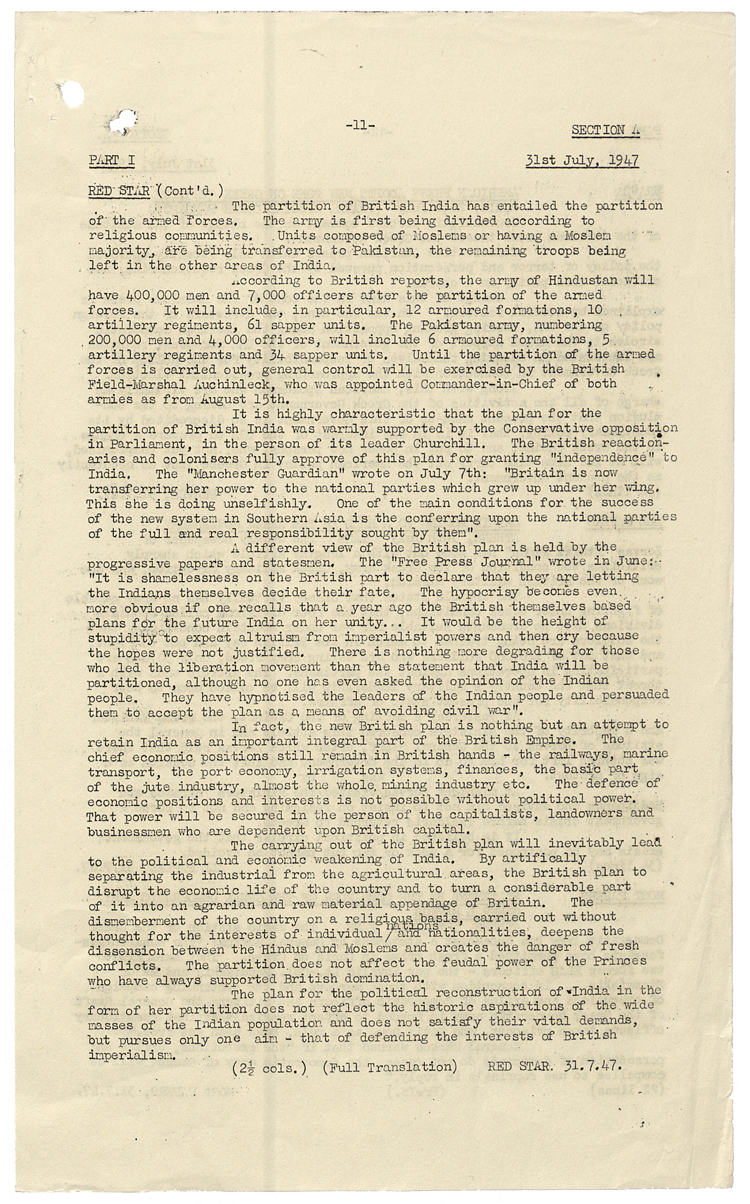 The partition of British India has entailed the partition of the armed forces. The army is first being divided according to religious communities. Units composed of Muslims or having a Moslem majority, are being transferred to Pakistan, the remaining troops being left in the other areas of India.

According to British reports, the army of Hindustan will have 400,000 men and 7,000 officers after the partition of the armed forces. It will include, in particular, 12 armoured formations, 10 artillery regiments, 61 sapper units. The Pakistan army, numbering 200,000 men and 4,000 officers, will include 6 armoured formations, 5 artillery regiments and 34 sapper units. Until the partition of the armed forces is carried out, general control will be exercised by the British Field-Marshal Auchinleck, who was appointed Commander-in-Chief of both armies as from August 15th.

It is highly characteristic that the plan for the partition of British India was warmly supported by the Conservative opposition in Parliament, in the person of its leader Churchill. The British reactionaries and colonisers fully approve of this plan for granting “independence” to India, The “Manchester Guardian” wrote on July 7th: “Britain is now transferring her power to the national parties which grew up under her wing. This she is doing unselfishly. One of the main conditions for the success of the new system in Southern Asia is the conferring upon the national parties of the full and real responsibility sought by them”.

A different view of the British plan is held by the progressive papers and statesmen. The “Free Press Journal” wrote in June: “It is shamelessness on the British part to declare that they are letting the Indians themselves decide their fate. The hypocrisy becomes even more obvious if one recalls that a year ago the British themselves based plans for the future India on her unity… It would be the height of stupidity to expect altruism from imperialist powers and then cry because the hopes were not justified. There is nothing more degrading for those who led the liberation movement than the statement that India will be partitioned, although no one has even asked the opinion of the Indian people. They have hypnotised the leaders of the Indian people and persuaded them to accept the plan as o, means of avoiding civil war”.

In fact, the new British plan is nothing but an attempt to retain India as an important integral part of the British Empire, The chief economic positions still remain in British hands – the railways, marine transport, the port economy, irrigation systems, finances, the basic part of the jute, industry, almost the whole, mining industry etc. The defence of economic positions and interests is not possible without political power. That power will be secured in the person of the capitalists, landowners and businessmen who are dependent upon British capital.

The carrying out of the British plan will inevitably lead to the political and economic weakening of India. By artifically separating the industrial from the agricultural areas, the British plan to disrupt the economic life of the country and to turn a considerable part of it into an agrarian and raw material appendage of Britain. The dismemberment of the country on a religious basis, carried out without thought for the interests of individual nations and Nationalities, deepens the dissension between the Hindus and Moslems and creates the danger of fresh conflicts, The partition, does not affect the feudal power of the Princes who have always supported British domination.

The plan for the political reconstruction of India in the form of her partition does not reflect the historic aspirations of the wide masses of the Indian population and does not satisfy their vital demands, but pursues only one aim – that of defending the interests of British imperialism.