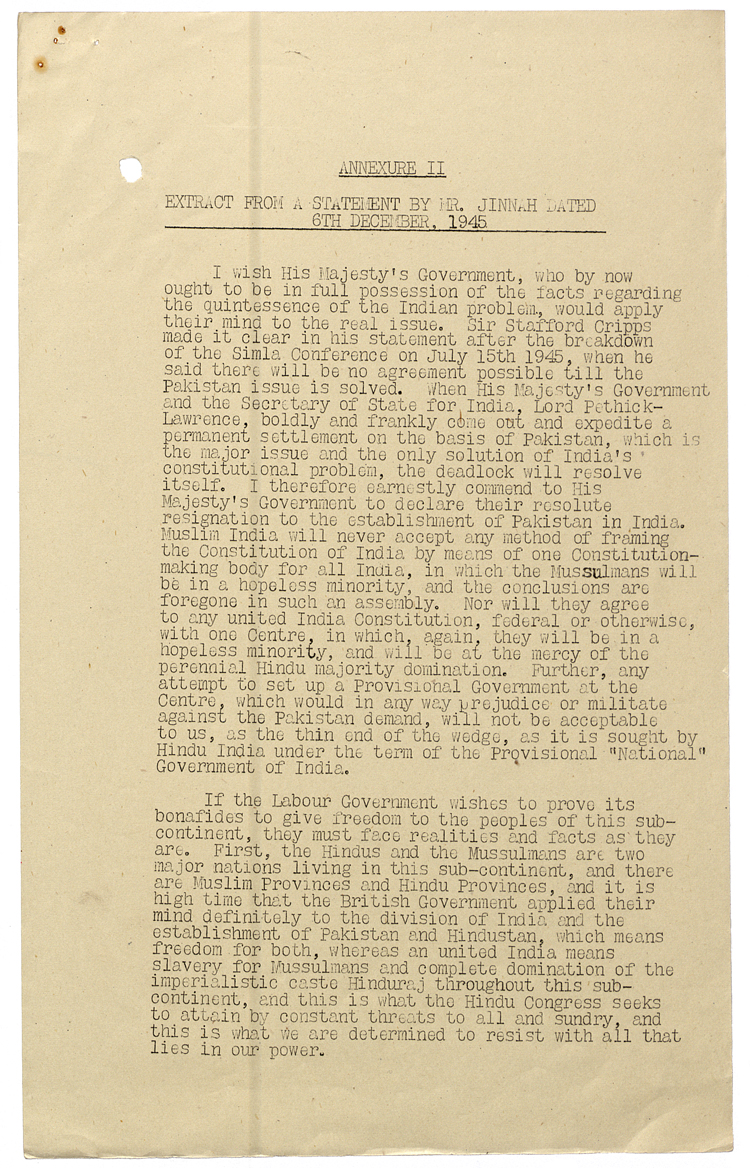 I wish His Majesty’s Government, who by now ought to be in full possession of the facts regarding the quintessence of the Indian problem, would apply their mind to the real issue. Sir Stafford Cripps made it clear in his statement after the breakdown of the Simla Conference on July 15th 1945, when he said there will be no agreement possible till the Pakistan issue is solved. When his Majesty’s Government and the Secretary of State for India, Lord Pethick-Lawrence, boldly and frankly come out and expedite a permanent settlement on the basis of Pakistan, which is the major issue and the only solution of India’s constitutional problem, the deadlock will resolve itself. I therefore earnestly commend to His Majesty’s Government to declare their resolute resignation to the establishment of Pakistan in India. Muslim India will never accept any method of framing the Constitution of India by means of one Constitution-making body for all India, in which the Mussulmans will be in a hopeless minority and the conclusions are foregone in such an assembly. Nor will they agree to any united India Constitution, federal or otherwise, with one Centre, in which, again, they will be in a hopeless minority, and will be at the mercy of the perennial Hindu majority domination. Further, any attempt to set up a Provisional Government at the Centre, which would in any way prejudice or militate against the Pakistan demand, will not be acceptable to us, as the thin end of the wedge, as it is sought by Hindu India under the term of the Provisional “National” Government of India.

If the Labour Government wishes to prove its bonafides to give freedom to the peoples of this sub-continent, they must face realities and facts as they are. First, the Hindus and the Mussulmans are two major nations living in this sub-continent, and there are Muslim Provinces and Hindu Provinces, and it is high time that the British Government applied their mind definitely to the division of India and the establishment of Pakistan and Hindustan, which means freedom for both, whereas an united India means slavery for Mussulmans and complete domination of the imperialistic caste Hinduraj throughout this sub-continent, and this is what the Hindu Congress seeks to attain by constant threats to all and sundry, and this is what we are determined to resist with all that lies in our power.