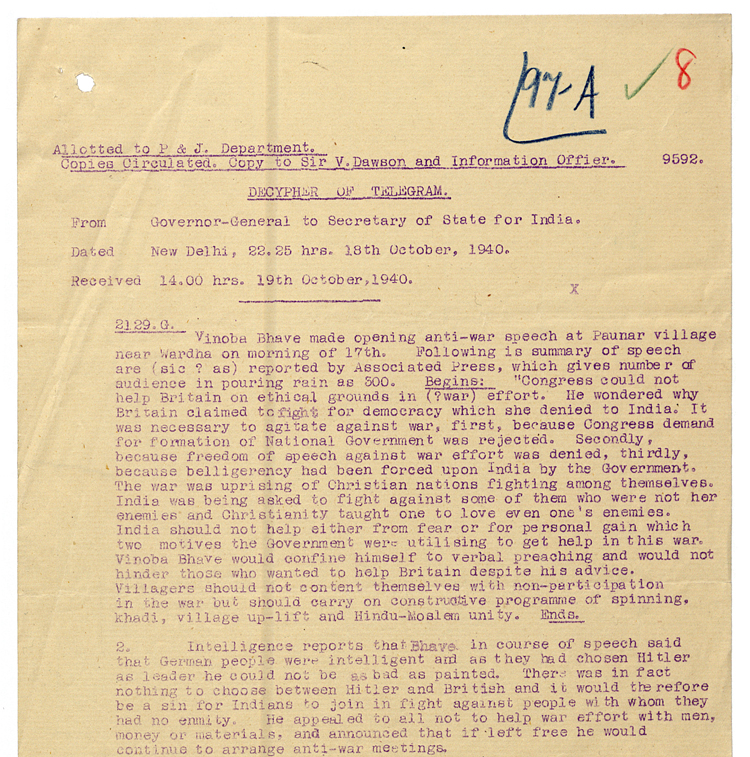 Vinoba Bhave made opening anti-war speech at Paunar village near Wardha on morning of 17th. “Following is summary of speech are (sic ? as) reported by Associated Press, which gives number of audience in pouring rain as 300. Begins: “Congress could not help Britain on ethical grounds in (?war) effort. He wondered why Britain claimed to fight for democracy which she denied to India. It was necessary to agitate against war, first, because Congress demand for formation of National Government was rejected. Secondly because freedom of speech against war effort was denied, thirdly because belligerency had been forced upon India by the Government. The war was uprising of Christian nations fighting among themselves. India was being asked to fight against some of them who were not her enemies and Christianity taught one to love even one’s enemies. India should not help either from fear or for personal gain which two motives the Government were utilising to get help in this war. Vinoba Bhave would confine himself to verbal preaching and would not hinder those who wanted to help Britain despite his advice. Villagers should not content themselves with non-participation in the war but should carry on constructive programme of spinning, khadi, village up-lift and Hindu-Moslem unity. Ends.

2. Intelligence reports that Bhave in course of speech said that German people were intelligent and as they had chosen Hitler as leader he could not be so bad as painted. There was in fact nothing to choose between Hitler and British and it would therefore be a sin for Indians to join in fight against people with whom they had no enmity. He appealed to all not to help war effort with men, money or materials and announced that if left free he would continue to arrange anti-war meetings.