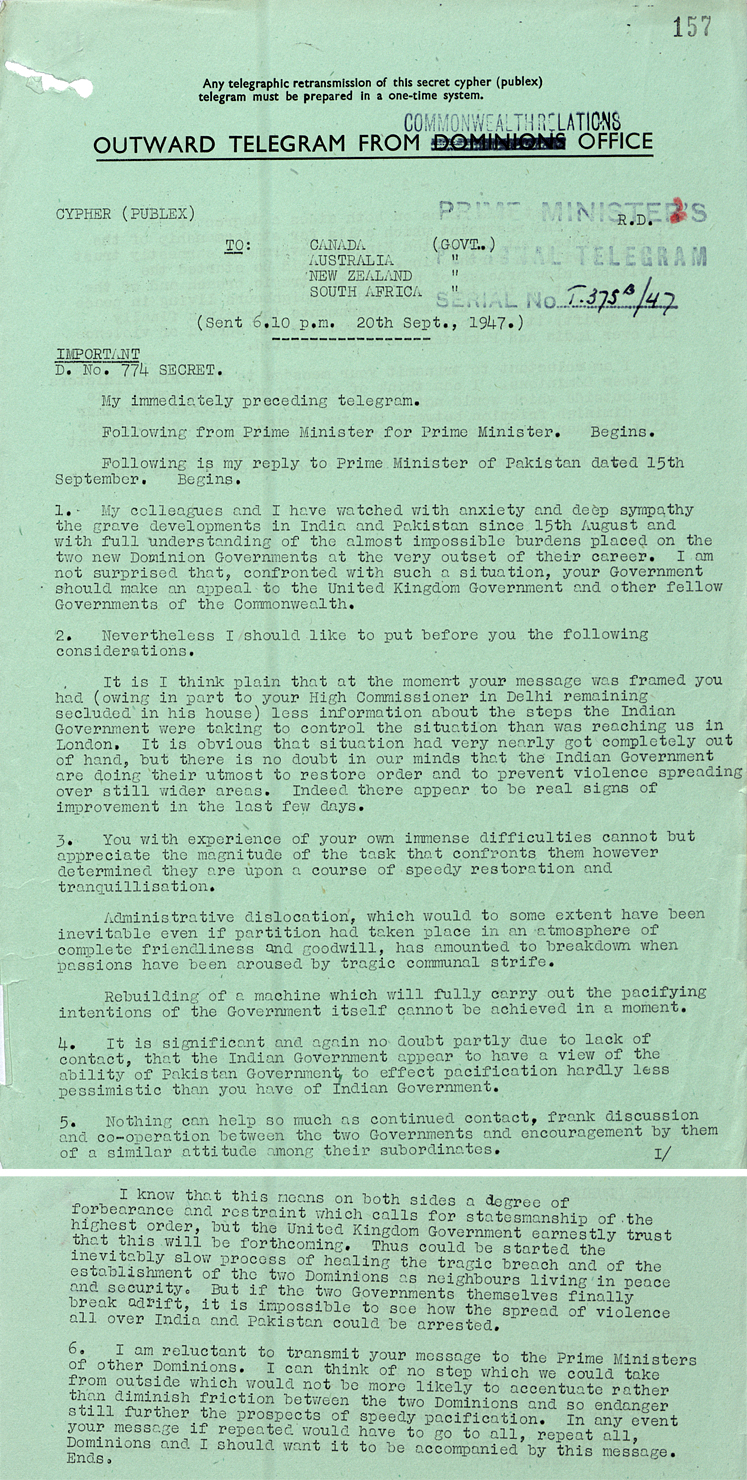 Following is my reply to Prime Minister of Pakistan dated 15th September Begins.

1. My colleagues and I have watched with anxiety and deep sympathy the grave developments in India and Pakistan since 15th August and with full understanding of the almost impossible burdens placed on the two new Dominion Governments at the very outset of their career. I am not surprised that, confronted with such a situation, your Government should make an appeal to the United Kingdom Government and other fellow Governments of the Commonwealth.

2. Nevertheless I should like to put before you the following considerations. It is I think plain that at the moment your message was framed you had (owing in part to your High Commissioner in Delhi remaining secluded in his house) less information about the steps the Indian Government were taking to control the situation than was reaching us in London. It is obvious that situation had very nearly got completely out of hand, but there is no doubt in our minds that the Indian Government are doing their utmost to restore order and to prevent violence spreading over still wider areas. Indeed there appear to be real signs of improvement in the last few days.

3. You with experience of your own immense difficulties cannot but appreciate the magnitude of the task that confronts them however determined they are upon a course of speedy restoration and tranquillisation.
Administrative dislocation, which would to some extent have been inevitable even if partition had taken place in an atmosphere of complete friendliness and goodwill, has amounted to breakdown when passions have been aroused by tragic communal strife.

Rebuilding of a machine which will fully carry out the pacifying intentions of the Government itself cannot be achieved in a moment.

5. Nothing can help so much as continued contact, frank discussion and co-operation between the two Governments and encouragement by them of a similar attitude among their subordinates.

I know that this means on both sides a degree of forbearance and restraint which calls for statesmanship of the highest order, but the United Kingdom Government earnestly trust that this will be forthcoming. Thus could be started the inevitably slow process of healing the tragic breach and of the establishment of the two Dominions as neighbours living in peace and security. But if the two Governments themselves finally break adrift, it is impossible to see how the spread of violence all over India and Pakistan could be arrested.

6. I am reluctant to transmit your message to the Prime Ministers of other Dominions I can think of no step which we could take from outside which would not be more likely to accentuate rather than diminish friction between the two Dominions and so endanger still further the prospects of speedy pacification. In any event your message if repeated would have to go to all, repeat all, Dominions and I should want it to be accompanied by this message.
Ends.