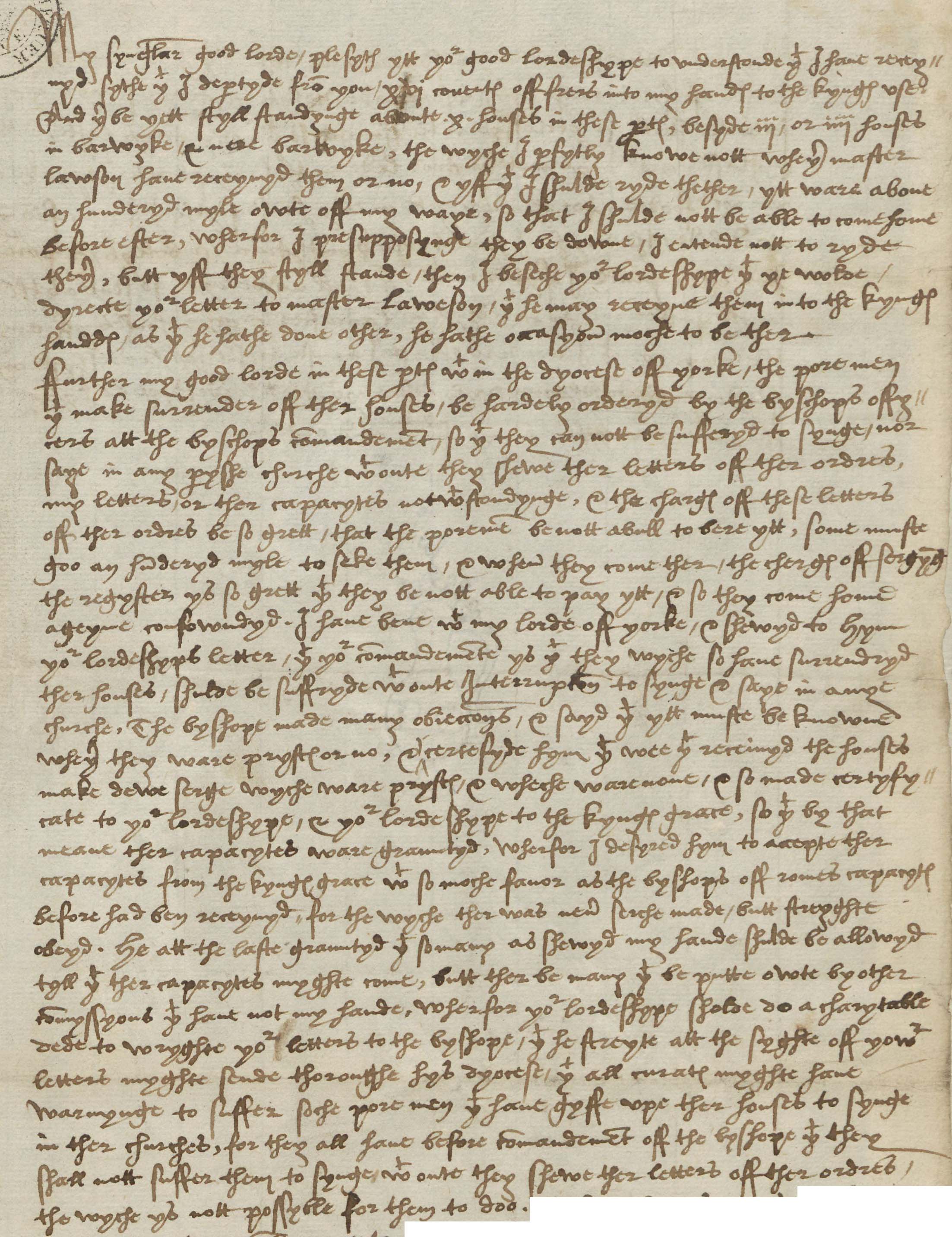 This letter provides an insight into some of the practical problems faced by monks when forced to leave their monasteries. They found it difficult to be licensed for other work. However, it was worse for nuns as they were still bound by oaths of celibacy: this explains why the question how they would support themselves became an issue during the Pilgrimage of Grace.

… Further my good lord in these parts with in the diocese of York, the pore [poor] men [monks] that make surrender off their houses [i.e. monasteries], be hardly ordered by the bishops officers at the bishops commandment, for that they cannot be sufferyd [permitted] to sing nor say in any parish church without they shew their letters of their orders, my letters or their capacytes [abilities] notwithstanding, & the charges of these letters of their orders be so great that the poremen [poor] be not able to bear it some must go an hundred miles to seek them, & when they come there the charges of searching the register is so great that they be not able to pay it & so they come home again confounded [defeated].  I have been with my lord of York [Edward Lee, Archbishop of York] & showed to him your lordship’s letter that your commandment is that they which so have surrendered their houses [left their monasteries], should be suffryde [permitted] without interruption to sing & say in any church. The bishop made many objections & said that it must be knowed [there must be evidence] whether they were priests or not, & certefyde [certified]  him that we that received the houses make due search which were priests & which were none [not] & so made certyfycate [certificate] to your lordship, & your lordship to the king’s grace, so that by that mean either capacytes were granted, [granted] where for I desired him to accept their capacytes from the kings grace with so much favour as the bishops of Rome capacytes before had been received for the which there was never such made, but strength obeyed.  He at last granted that so many as should my hand should be allowed till that their capacytes might come, but there be many that be put out by other commissions [commissioners closing monasteries] that have not my hand, where for your lordship should do a charitable deed write your letters to the bishop, that he streyte [straight] at the sight of your letters might send thorough his diocese that all curates might have warning to suffer such poor men that have given up their houses to sing in their churches for there all have before commandment of the bishop that they shall not suffer them to sing without they show their letters of their orders the which is not possible for them to do…