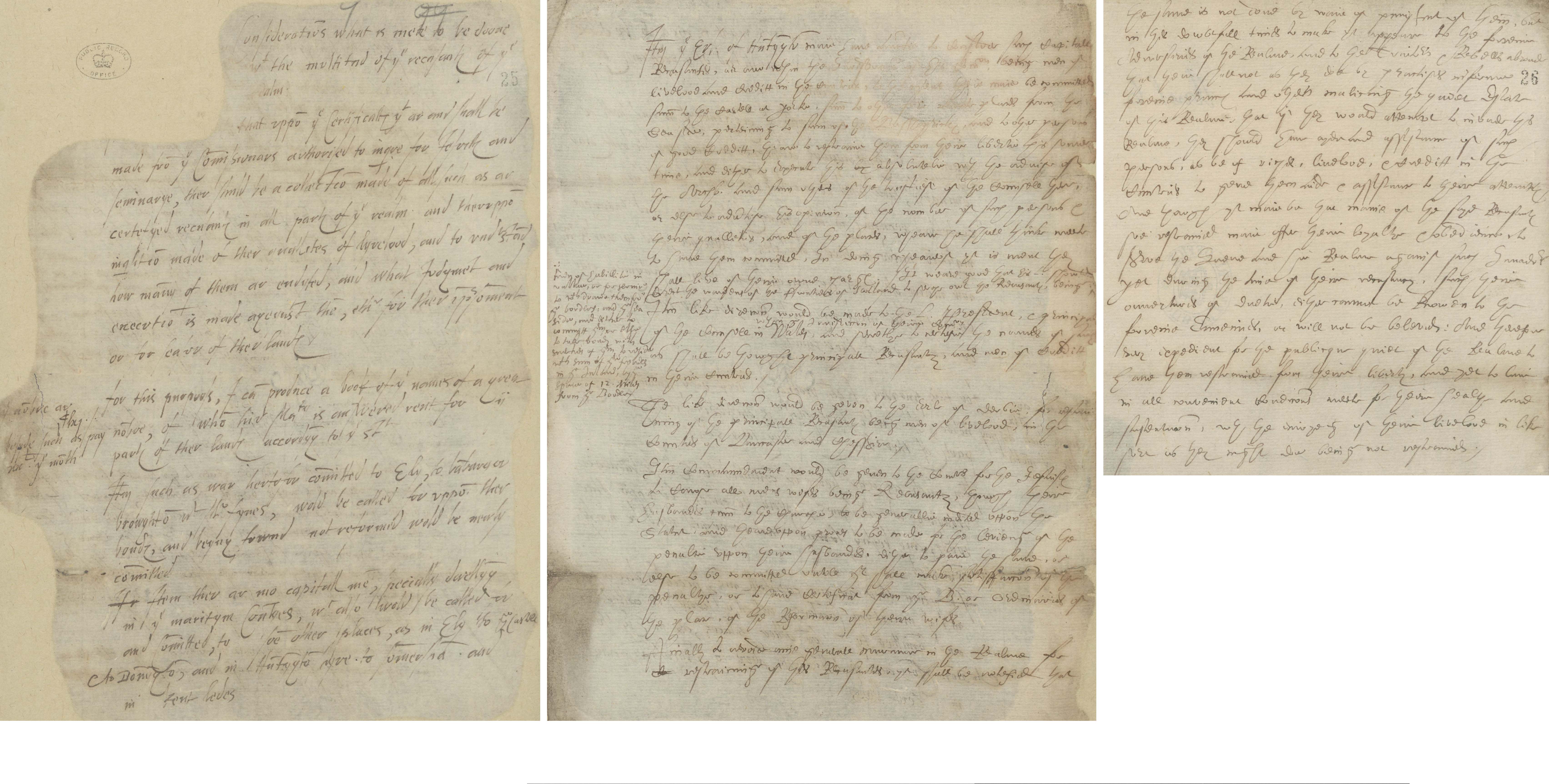 Burghley outlines the measures that the state can take both to deal with (Catholic) recusants and to address any popular discontent (‘murmuring’) of their actions.

It was convenient that upon the Certificates that are and shall be made from the Commissioners authorised to inquire for Jesuits and seminary, there should be a collection made of all such as are certified recusants in all parts of the realm and there upon inquisition made of their qualities of livelihood, and to understand how many of them are indicted and what judgment and execution is made against them, either for their imprisonment or for seizure of their lands.

[1]For this purpose, I can produce a book of the names of a great number of whom her Majesty is answered due rent for two parts of their lands according to the statute

Item: such as what here to for committed to Ely, to Banbury or brought on with Mr Fynes would be called for upon their bonds and being found not reformed would be nearly committed

Item: there are more capital men, specially dwelling in the maritime counties, which also would be called for and committed, to some other places, as in Ely to the Castle at Donnington, and in Huntingtonshire to Sommersham and in Kent [to] Leeds

Item: the Earl of Huntington[2] may have authority to consider such capital recusants, as are within the Jurisdiction of his Commission, vetting men of livelihood and credit in the countries [counties] to the intent there may be committed some to the Castle in York, some to other such remote places from the seaside, pertaining to some of the Bishoprics, and to other persons of good credit, there to restrain them from their liberty this summertime, and either to execute this by absolutely with the advice of the Archbishop and some others of the trustiest of the Council there,[3] or else to advertise [give] his opinion, of the number of such persons & their qualities, and of the places where are of it is mete [suitable or appropriate] they shall live of their own charges.  It were good that his Lordship should direct the wardens of the frontiers of Scotland to seek out the recusants, being men of ability in [value] or in service to withdraw them from the borders: and the seaside, and either to commit them or else to take bonds with sureties [guarantees] of them to reside with some of their friends in that inland, by the space of 12 miles from the borders.

Item: like direction would be made to the Lord President & principal of the Council in Wales, within the Jurisdiction of their Commission and [ordered] to certify the names of such as shall be thought principal recusants, and men of Credit in their Countries.

The like direction would be given to the Earl of Derby, for [confirming?] of the principal recusants being men of livelihood in the countries [counties] of Lancaster and Cheshire.

Item: Commandment would be given to the Courts for the Jesuits to cause all men’s wives being recusants, through their husbands, to come to the Churches to be generally indicted upon the Statute, and there upon process to be made for the levying of the penalty upon their husbands, either to pay the same or else to be committed until they shall make satisfaction of the penalty, or to have certificate from the Bishop or Ordinaries [i.e. churchman exercising jurisdiction over a specified area] of the place, of the reformation of their wives.

Finally, to avoid any general murmuring in the realm for retraining of these recusants it shall be notified that

the same is not done by way of punishment of them, but in these doubtful times to make it appear to the foreign adversaries of the realm, and to the traitors and rebels abroad, that they shall not as they do by practises [inform?] foreign princes and others malicing [causing trouble] [in] the quiet estate of this Realm, that if they would attempt to invade this realm, they should have aid and assistance of such persons, as be of riches, livelihood, & credit in the countries to give them aid and assistance to their attempts.  And though it may be that many of the said recusants so restrained may offer here in loyalty & obedience to serve the Queen and her realm against such invaders yet during the time of their recusancy such their overtures of duty, either cannot be known to her foreign enemies, or will not be believed: And therefore very expedient for the public quiet of the realm to have them restrained from their liberty, and yet to live in all convenient conditions meter [more suitable] for their health and sustenance, which the enjoying of their livelihood in like sort as they might do being not restrained.

[2] At this point, the document ceases to be in Burghley’s hand and is written by a clerk or secretary

[3] i.e. the archbishop of York (at this time, John Piers) and members of the Council of the North