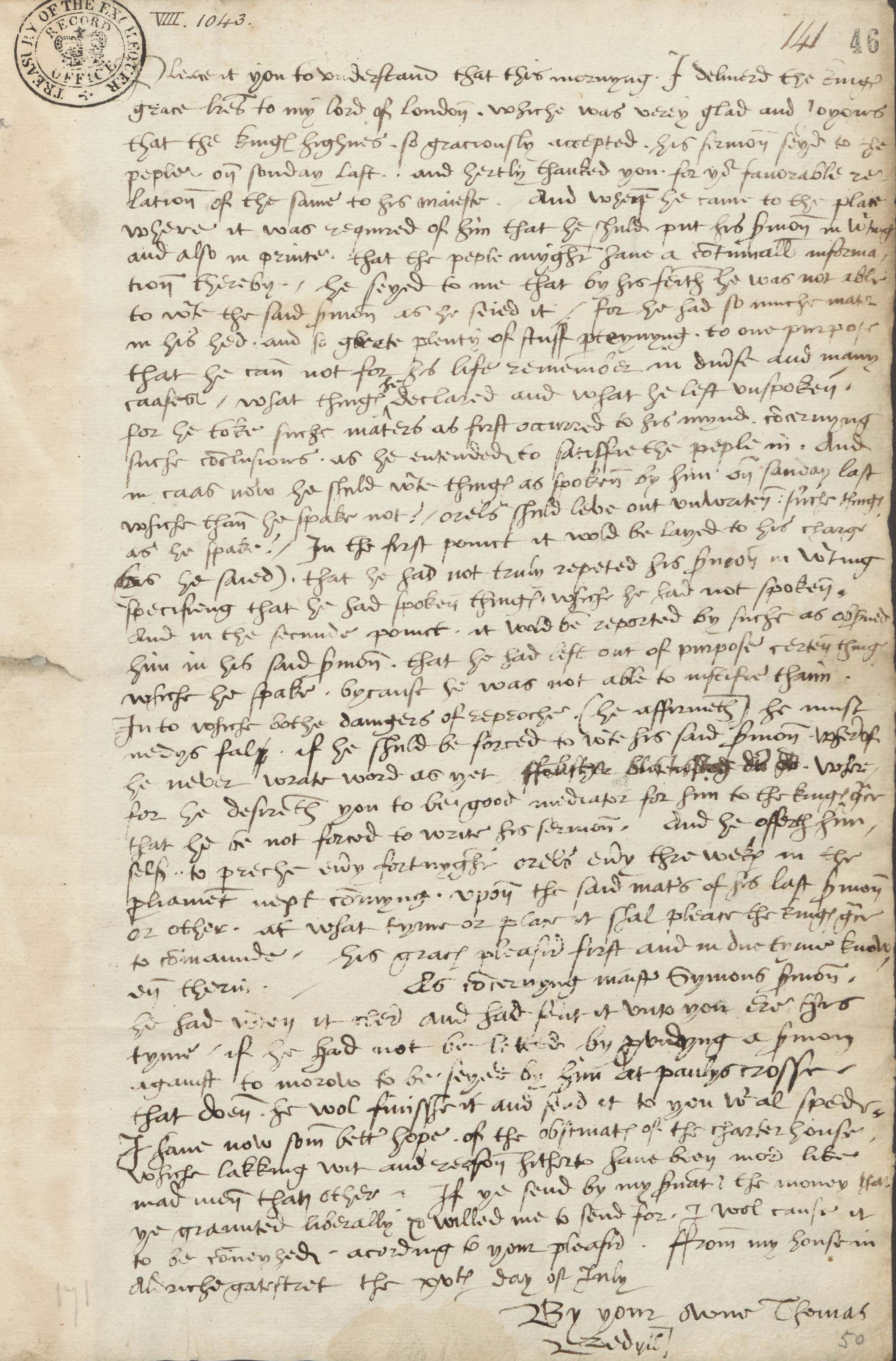 This letter highlights the problems historians face when analysing sermons: that the preached text might not be the same as the written or printed version that still exists. Sermons were a very important part of the official Henrician propaganda campaign, partly because few could read.  The letter refers to Paul’s Cross: this was the most important public preaching place in London, sometimes used to as a mouthpiece for the views of the state.

Please it you to understand that this morning I delivered the king’s grace letters to my lord of London [Bishop of London, John Stokesley] which was very glad and joyous that the king’s highness so graciously accepted his sermon said to the people on Sunday last.  And heartily thanked you for your favourable relation of the same to his majesty.  And whence he came to the place where it was required of him that he should put his sermon in writing and also in print that the people might have a continual information thereby, he said to me that his by faith he was not able to write the said sermon as he said it . For he had so much matter that he cannot for his life remember in diverse and many cases what things he declared and what he left unspoken.  For he took such matters as first occurred to his mind concerning such conclusions as he intended to satisfy the people in: And in case who he should write things as spoken by him on Sunday last which than he spoke not or else, should leave out unwritten such things as he spoke. In the first point it would be laid to his charge (as he said) that he had not truly repeated his sermon in writing specifying that he had spoken things which he had not spoken. And in the second point it would be reported by such as observed him in his said sermon that he had left out of purpose certain things which he spoke because he was not able to justify them:  In to which both dangers of reproach (he affirmed) he must needs fail if he should be forced to write his said sermon whereof he never wrote word as yet … where for he desired you to be good mediator for him to the kings grace that he be not forced to write his sermon.  And he offered himself to preach every fortnight or else every three weeks in the parliament next coming upon the said matters of his last sermon or other.  At what time or place it shall please the king’s grace to command. His graces pleased first and in due time [unclear] therein

As concerning master Symons sermon he had written it clear and had sent it unto you ere this time if he had not be letted[?] by providing a sermon against tomorrow to be said by him at paulyes crosse[1] that done for will finish it and send it to you with all speed.  I have now some better hope of the obstinates [stubborn people] of the charter house which lacking wit and reason hitherto have been more like mad men that other. If ye send by my servant the money that ye granted liberally & willed me to send for, I would cause it to be conveyed according to your pleasure.  From my house in Aldrich Gate street the 15th day of July

By your own Thomas Bedyll

[1] Paul’s Cross was the most important public preaching place in England.  It was located in the churchyard of St Paul’s Cathedral and could accommodate up to 6,000 people. It was destroyed in 1643 but its location is still marked in the churchyard.