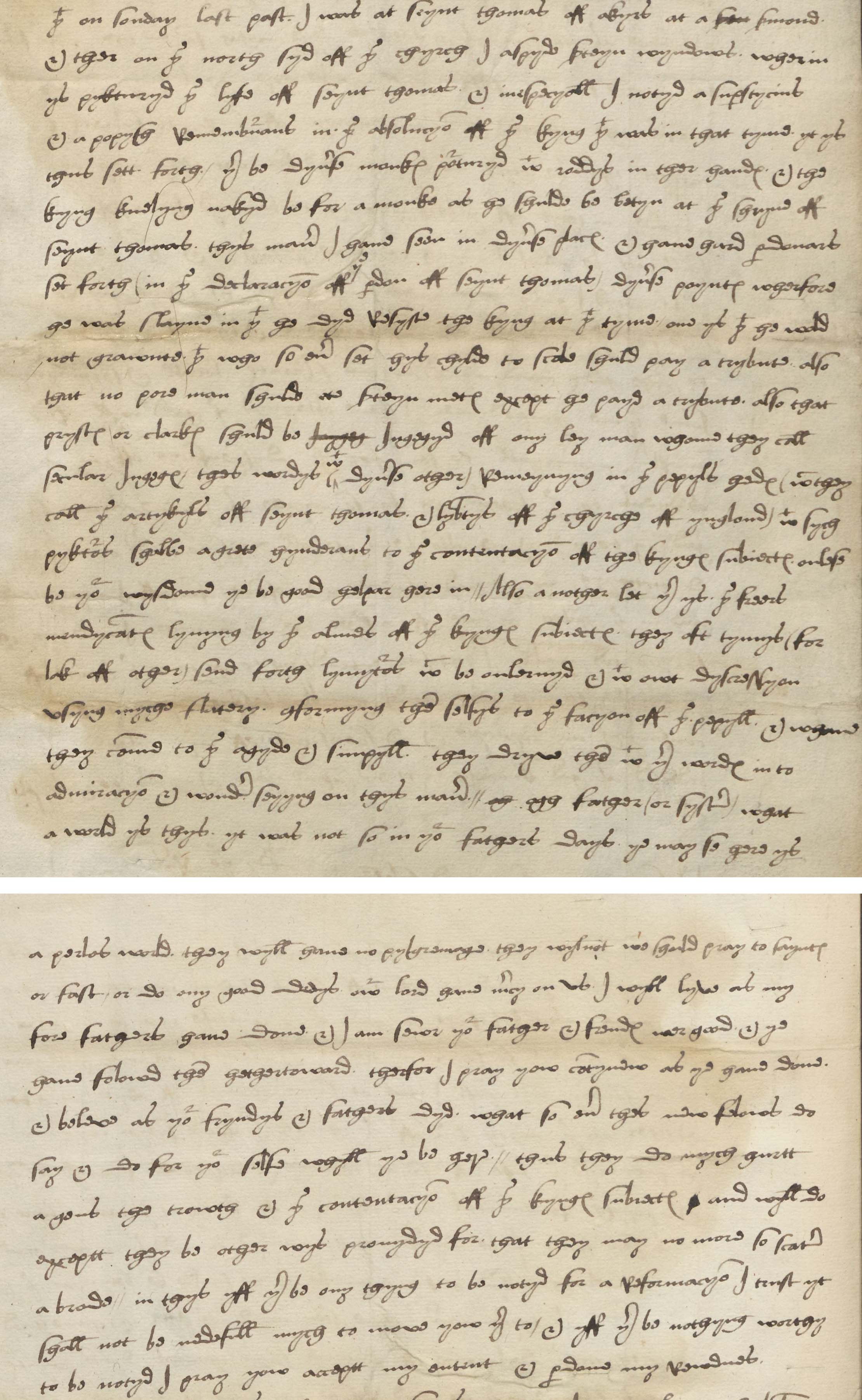 We know nothing of Ward, other than that he was a former friar who probably preached in London at this time. His letter is a good example of how some evangelicals viewed monks, friars and particularly ordinary people as superstitious and easily fooled by unlearned friars.  Ward advised Cromwell to reform the mendicant orders [religious orders such as friars which forbade ownership of property and worked among lay people supported by donations or alms]. Ward argued that friars should be provided with other means of making a living as this would stop them from preaching lies to the people.

[f.107r]
…on Sunday last past I was at Saint Thomas Acres [church] in London at a sermon & there on the north side of the chyrch I aspyd [espied] serteyn [certain] windows wherof is pykeryd [pictured] ye life of saint Thomas & inespecyall [especially] I noticed a superstitious & a popish remembrans [commemoration] in the absolution of the king that was in that time it pertegns [pertains] set forth that be divers [several] monks portrayed with rods in their hands & the king kneeling naked before a monk as he should be betyn [beaten] at the shrine off saint Thomas.  This manner I have seen in divers places & have heard pardoners set forth [described] in ye declarations of the pardon of Saint Thomas divers payntes [paintings] where for he was slain in that he died resist [ing] the king at that time. One is that he would not grant that whosoever set [sent] his child to school should pay a tribute, also that priests or clerks should be judged of any layman whom they call secular judges. These words with divers others remaining in the pepyls [peoples] heads (which they call the articles of Saint Thomas & liberties of the church of England) with such pictures, shall be a great hindrance to the contention of the kings subject unless by your wisdom you be good help here in. Also another obstacle that is the friars mendicants living by the alms of the king’s subjects, they oft times (for lack of other) send forth limiters* which be unlearned & without discretion [who use much flattery, conforming] themselves to the fashion of the people & when they come to the aged & simple they drive them with their words into admiration & wonder saying on this manner // Hey father (or sister) what a world is this that was not so in your fathers days you may see this is

a perilous world they will have no pilgrimage, they will not we should pray to saints or fast. Or do any good deeds our lord have mercy on us. I will live as my fore fathers have done & I am server your fathers & [friends were] good & they have followed them hither toward. Therefore I pray you continue [as ye] have done. & believe as your friends & fathers did. Whatsoever these new fellows do say & do for yourself will ye be here. Thus they do much hurt against the truth & the contention of the kings subjects & and will do except they be other ways provided for that they may no more so scatter abroad [be dispersed]. In this if you be anything to be noted for reformation [I] trust that shall not be needful much to move you that to & if it be nothing worthy to be noted I pray you accept my intents & pardon my readiness…

* A limiter was a friar licensed to preach, hear confession and beg for alms