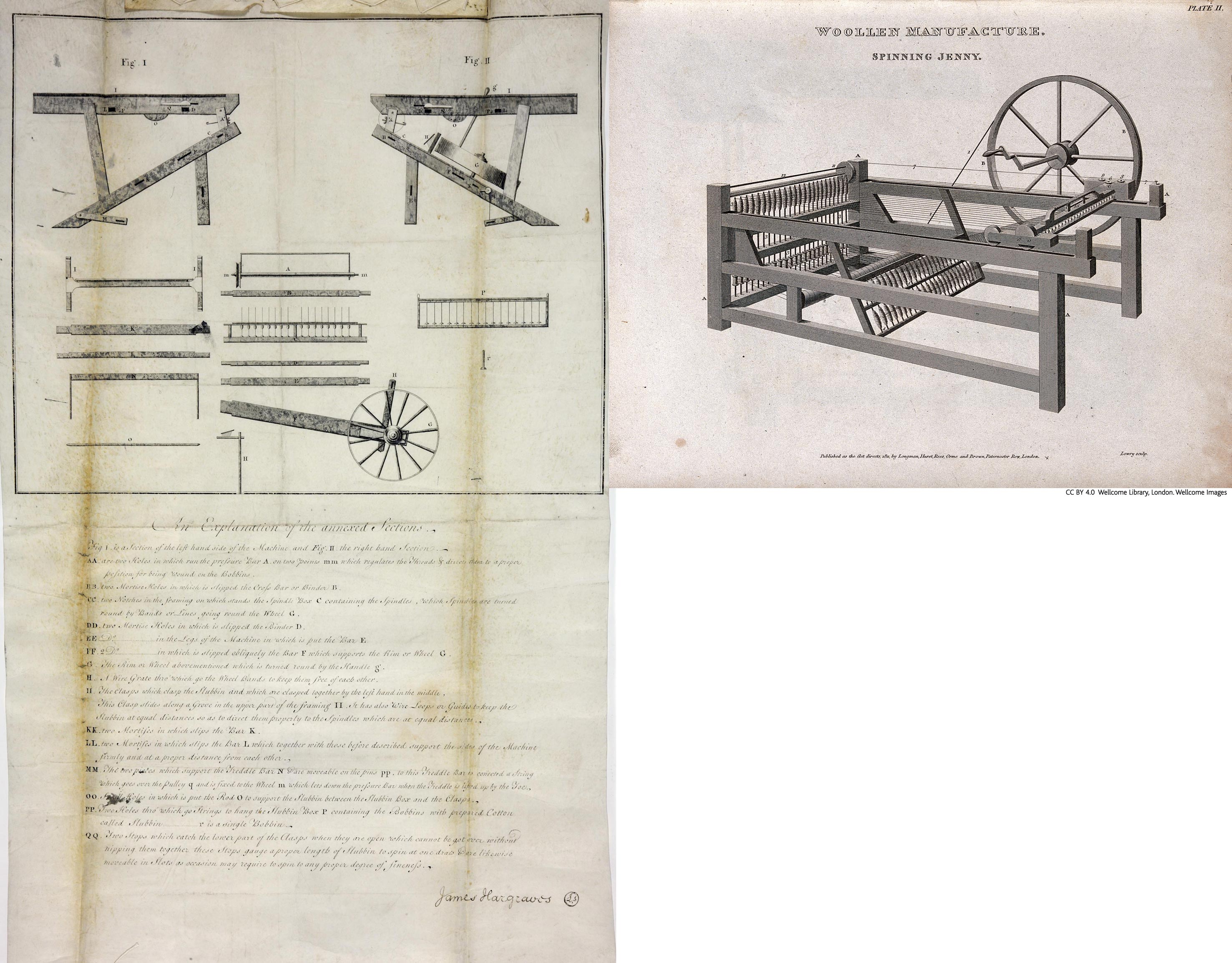 Plan for the spinning Jenny invented by James Hargreaves, 1770. This was a very important invention because it meant that eight threads could be spun at a time, rather than a single thread using a spinning wheel, Catalogue ref: (C 210/11/3/30/07) Completed Spinning Jenny Image (right) via Wellcome Images.

An explanation of the annexed Sections

Fig. I is a Section of the left hand side of the Machine and Fig. II the right hand Section.

AA  are two Holes in which run the pressure Bar A. on two points MM which regulates the Threads & directs them to a proper position for being wound on the Bobbins.

CC   two Notches in the framing on which stands the Spindle Box C containing the Spindles which Spindles are turned round by Bands or Lines going round the Wheel G.

DD   two mortise Holes in which is slipped the Binder D.

FF    Ditto……… in which is slipped obliquely [at an angle] the Bar F which supports the Rim or Wheel G.

G    The Rim or Wheel above mentioned which is turned round by the Handle g.

H    A Wire Grate through which go the Wheel Bands to keep them free of each other.

II   The clasps which clasp the Slubbin [prepared cotton] and which are clasped together by the left hand in the middle. This Clasp slides along a Grove in the upper part of the framing II. It has also Wire Loops or Guides to keep the Stubbin at equal distances so as to direct them properly to the Spindles which are at equal distances.

KK two Mortises in which slips the Bar K.

LL two mortises in which slips the Bar L which together with those before described support the sides of the machine firmly and at a proper distance from each other.

MM The two pieces which support the Treddle Bar N P are moveable on the pins pp.to this Treddle Bar is connected a string which goes over the pulley q and is fixed to the Wheel m which lets down the pressure Bar when the Treddle is lifted up by the toe.

OO Small Holes in which is put the Rod O to support the Slubbin between the Slubbin Box and the clasps.

PP Two Holes through which go strings to hang the Slubbin Box containing the Bobbins with prepared Cotton called Slubbin————r is a single Bobbin.

QQ  Two stops which catch the lower part of the Clasps when they are open which cannot be got over without nipping them together, these Stops gauge a proper length of Slubbin to spin at one draw & are likewise moveable in Slots as occasion may require to spin to any proper degree of fineness.