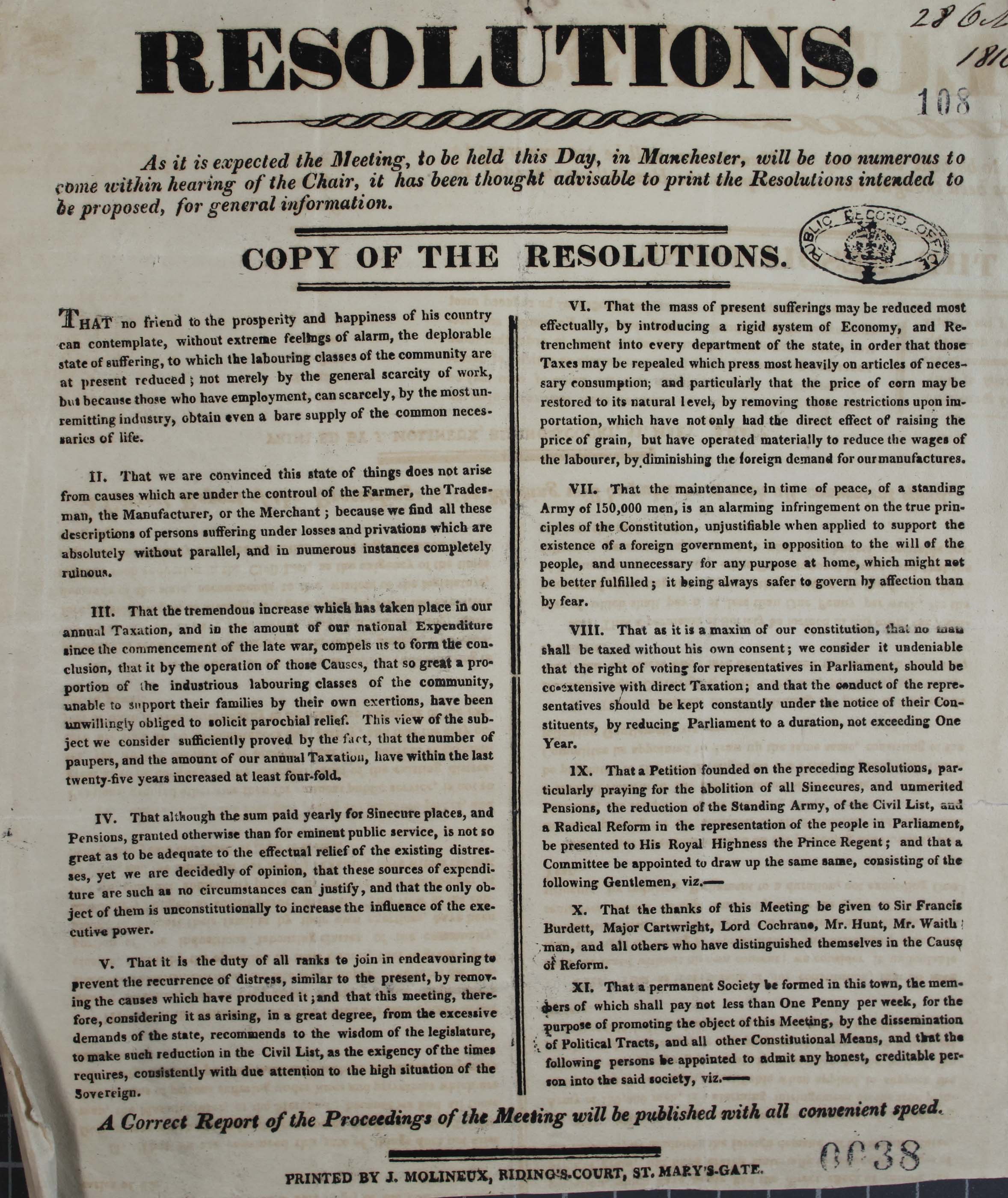 Printed bill containing the resolutions to be proposed for a meeting in Manchester. It summarises the reasons for discontent among the working classes and highlights the French wars and taxation as a major causes for poverty, 28 October 1816. (HO 40/9/f108)

As it is expected the Meeting, to be held this Day in Manchester, will be too numerous to come within hearing of the Chair, it has been thought advisable to print the Resolutions intended to be proposed, for general information.

COPY OF THE RESOLUTIONS.

That no friend to the prosperity and happiness of his country can contemplate, without extreme feelings of alarm, the deplorable state of suffering, to which the labouring classes of the community are at present reduced; not merely by the general scarcity of work, but because those who have employment, can scarcely, by the most unremitting industry, obtain even a bare supply of the common necessaries of life.

II. That we are convinced this state of things does not arise from causes which are under the control of the Farmer, the Tradesman, the Manufacturer, or the Merchant; because we find all these descriptions of persons suffering under losses and privations which are absolutely without parallel, and in numerous instances completely ruinous.

III. That the tremendous increase which has taken place in our annual taxation, and in the amount of National Expenditure since the commencement of the late war, compels us to form the conclusion, that it by operation of those Causes, that so great a proportion of the industrious labouring classes of the community, unable to support their families by their own exertions, have been unwillingly obliged to solicit parochial relief. This view of the subject we consider sufficiently proved by the fact, that the number of paupers, and the amount of annual Taxation, have within the last twenty-five years increased at least four-fold.

IV. That although the sum paid yearly for Sinecure places, and Pensions, granted otherwise than for eminent public service, is not so great as to be adequate to the effectual relief of the existing distresses, yet we are decidedly of the opinion, that these sources of expenditure are such as no circumstances can justify, and that the only object of them is unconstitutionally to increase the influence of the executive power.

V. That it is the duty of all ranks to join in endeavouring to prevent the
recurrence of distress, similar to the present, by removing the causes which have produced it, and that this meeting, therefore, considering arising, in a great degree, from the excessive demands of the state, recommends to the wisdom of the legislature, to make such reduction in the Civil List, as the exigency of the times requires, consistently with due attention to the high situation of the Sovereign.

VI. The mass of present sufferings may be reduced most effectually, by introducing a rigid system of Economy, and Retrenchment into every department of state, in order that those Taxes may be repealed which press most heavily on articles of necessary consumption and particularly that the price of corn may be restored to its natural level, by removing those restrictions upon importation, which have not only had the direct effect of raing the price of grain, but have operated materially to reduce wages of the labourer, by diminishing the foreign demand for our manufactures.

VII. That the maintenance, in time of peace, of a standing Army of 150,000, is an alarming infringement on the true principles of the Constitution, unjustifiable when applied to support the existence of a foreign government, in opposition to the will of the people, and unnecessary for any purpose at home, which might not be better fulfilled; it being always safer to govern by affection than by fear.

VIII. That as it is a maxim of our constitution, that no man shall be taxed without his own consent; we consider it undeniable that the right of voting for representatives in Parliament, should be co-extensive with direct Taxation; and that the notice of their Constituents, by reducing Parliament to a duration, not exceeding One year.

IX. That a Petition founded on the preceding Resolutions, particularly praying for the abolition of all Sinecures, and unmerited Pensions, the reduction of the Standing Army, of the Civil List, and a Radical Reform in the Representation of the people in Parliament, be presented to His Royal Highness the Prince Regent; and that a Committee be appointed to draw up the same, consisting of the following Gentlemen, viz.—

X. That the thanks of this meeting be given to Sir Francis Burdett, Major Cartwright, Lord Cochrane, Mr. Hunt, Mr. Waithman, and all others who have distinguished themselves in the Cause of reform.

XI. That a permanent Society be formed in this town, the members of which shall pay not less than One Penny per week, for the purpose of promoting the object of this meeting, by the dissemination of Political Tracts, and all other Constitutional Means, and that the following persons be appointed to admit any honest, creditable person into the said society, Viz.—

A correct Report of the Proceedings of the Meeting will be published with all convenient speed
PRINTED BY J. MOLINEUX, RIDING’S COURT, ST. MARY’S GATE