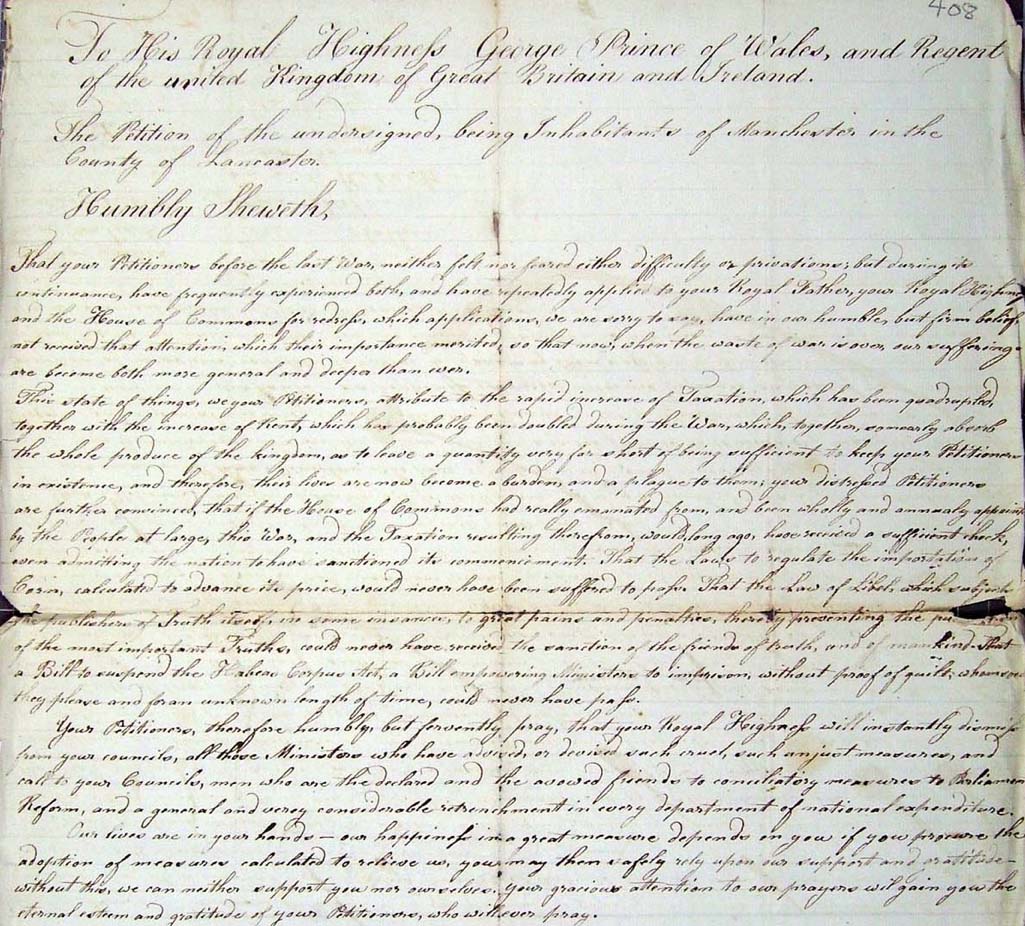 To His Royal Highness George Prince of Wales, and Regent of the United Kingdom of Great Britain and Ireland.

The Petition of the undersigned, being Inhabitants of Manchester, in the Country of Lancaster,

That your Petitioners before the last War, neither felt nor feared either difficulty or privations; but during its continuance, have frequently experienced both; and have repeatedly applied to your Royal Father, your Royal Highness, and the House of Commons for redress, which applications, we are sorry to say, have in our humble, but firm belief, not received that attention, which their importance merited, so that now, when the waste of war is over, our sufferings are become both more general and deeper than ever.

This state of things, we your Petitioners, attributed to the rapid increase in Taxation, which has been quadrupled, together with the increase of Rent, which has been doubled during the War; which, together, so nearly absorb the whole produce of the kingdom, as to leave a quantity very far short of being sufficient to keep your Petitioners in existence, and therefore, their lives are now become a burden, and a plague to them; your distressed Petitioners are further convinced, that is the House of Commons had really emanated from, and been wholly and annually appointed by the People at large, this War, and the Taxation resulting there from, would, long ago, have received a sufficient check, even admitting the nation to have sanctioned its commencement. That the Laws to regulate the importation of Corn, calculated to advance its price, would never have been suffered to pass. That the Law of Libel, which subjects the publishers of Truth itself, in some instances, to great pains and penalties, thereby preventing the publication of the most important Truths, could never have received sanction of the friends of truth, and of mankind. That a Bill to suspend Habeas Corpus Act, a Bill empowering Ministers to imprison without proof of guilt, whomsoever they please, and for an unknown length of time, could never have passed.

Your Petitioners, therefore humbly, but fervently pray, that your Royal Highness will instantly dismiss from your councils, all those Ministers who have advised, or devised such cruel, such unjust measures, and call to your Councils, men who are the declared and the avowed friends to conciliatory measures; to Parliamentary Reform, and a general and very considerable retrenchment in every department of national expenditure.

Our lives are in your hands – our happiness in a great measure depends on you – if you procure the adoption of measures calculated to relieve us, you may then safely rely upon our support and gratitude – without this, we can neither support you, nor ourselves. Your gracious attention to our prayers will gain you the eternal esteem and gratitude of your Petitioners, who will ever pray.