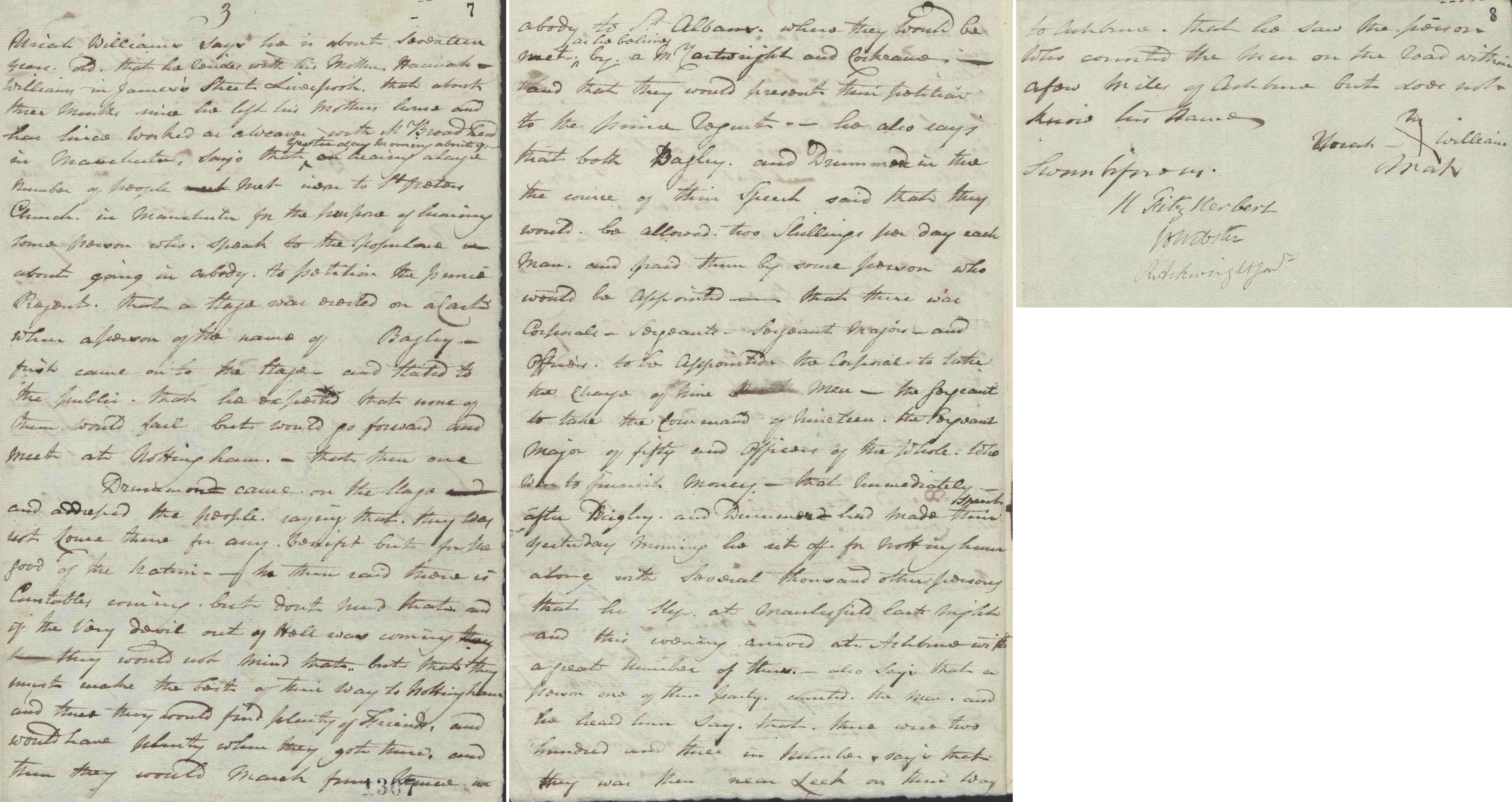 (i)
Uriah Williams says he is about seventeen years old, that he resides with his Mother Hannah Williams in James’s St Liverpool, that about three months since he left his Mother’s house and has since worked as weaver for Mr Broadhead in Manchester. Says that yesterday morning about 9 on hearing a large number of people met near to St Peter’s Church in Manchester for the purpose of hearing some Person who speak [sic] to the Populace about going in a body to petition the Prince Regent. That a stage was erected on a Cart when a Person of the name of Bagley first came on the stage and stated to the public that he expected that none of them would fail but would go forward and meet at Nottingham. That then one Drummond came on the stage and addressed the people saying that they was not come there for any benefit but for the good of the Nation. He then said there is Constables coming but don’t heed that, and if the very Devil out of Hell was coming they would not mind that but that they must make the best of their way to Nottingham and there they would find plenty of Friends, and would have plenty when they got there, and then they would march from thence

(ii)
in a body to St Albans, where they would be met as he believes by a Mr Cartwright and Cochrane; and that they would present their petition to the Prince Regent. He also says that both Bagley and Drummond in the course of their Speech, said that they would be allowed two shillings per day each man, and paid them by some Person who would be appointed – that that there was Corporals – Sergeants – Sergeant Majors – and Officers to be appointed, the Corporal to take the charge of nine Men – the Sergeant to take the command of nineteen, the Sergeant Major of fifty and officers of the whole who were to furnish money. That immediately after Bagley and Drummond had made their speech yesterday morning he set off for Nottingham along with several thousand other persons that he stopped at Macclesfield last night and this morning he arrived at Ashbourne with a great number of them. Also that a Person one of their Party counted the men and he heard him say that there were two hundred and three in number, says that they were then near Leek on their way

(iii)
to Ashbourne, that he saw the person who counted the men on the Road within a few miles of Ashbourne but does not know his name.