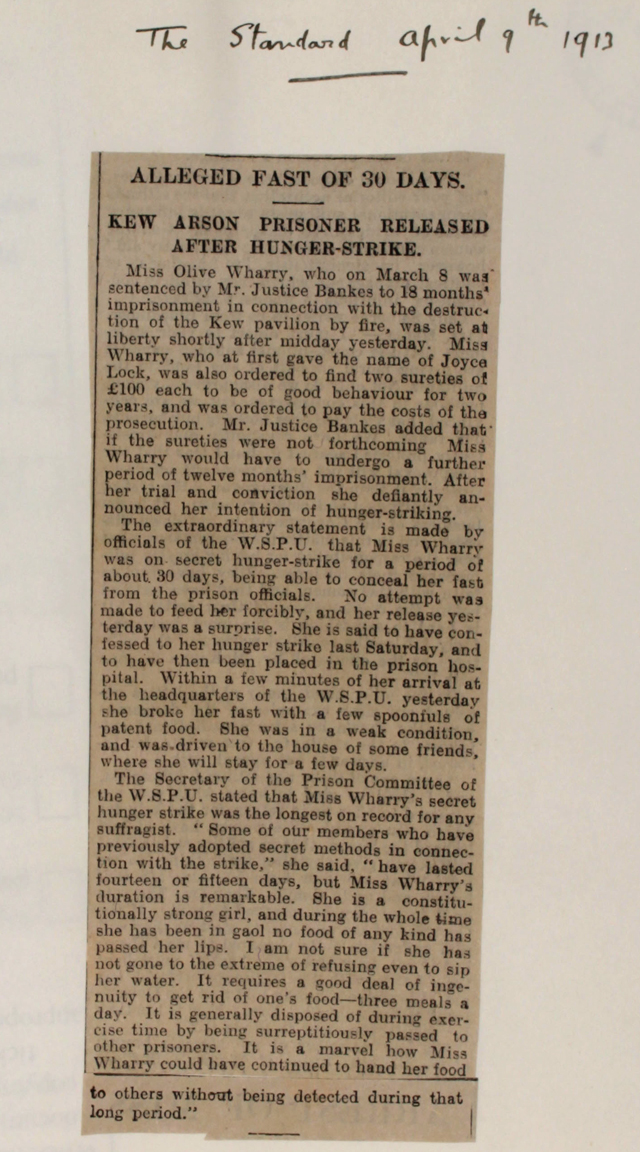 ‘The Standard’ was a suffragette newspaper.

Miss Olive Wharry, who was on March 8th sentenced by Mr. Justice Bankes to 18 months imprisonment in connection with the destruction of the Kew pavilion by fire, was set at liberty shortly after midday yesterday, Miss Wharry, who at first gave the name of Joyce Lock, was also ordered to find two sureties of £100 each to be of good behaviour for two years, [she had to pay £200 if she committed any crimes in the next two years] and was ordered to pay the cost of the prosecution [court costs]. Mr. Justice Bankes added that if the sureties were not forthcoming Miss Wharry would have to undergo a further period of twelve months’ imprisonment. After her trial and conviction she defiantly announced her intention of hunger-striking.

The extraordinary statement is made by officials of the W.S.P.U. that Miss Wharry was on secret hunger-strike for a period of about 30 days, being able to conceal her fast from the prison officials. No attempt was made to feed her forcibly, and her release yesterday was a surprise. She is said to have confessed to her hunger strike last Saturday, and to have then be placed in the prison hospital. Within a few minutes of her arrival at the headquarters of the W.S.P.U. yesterday she broke her fast with a few spoonfuls of patent food [health food]. She was in weak condition, and was driven to the house of some friends where she will stay for a few days.

The Secretary of the Prison Committee of the W.S.P.U. stated that Miss Wharry’s secret hunger strike was the longest on record for any suffragists. “Some of our members who have previously adopted secret methods in connection with the strike”, she said, “have lasted fourteen or fifteen days, but Miss Wharry’s duration is remarkable. She is a constitutionally [healthy] strong girl, and during the whole time she has been in gaol no food of any kind has passed her lips. I am not sure if she has gone to the extreme of even refusing to sip her water. It requires a good deal of ingenuity [skill] to get rid of one’s food – three meals a day. It is generally disposed of during exercise time by being surreptitiously [secretly] passed to other prisoners. It is a marvel how Miss Wharry could have continued to hand her food to others without being detected during that long period”.