Mining under the enemy 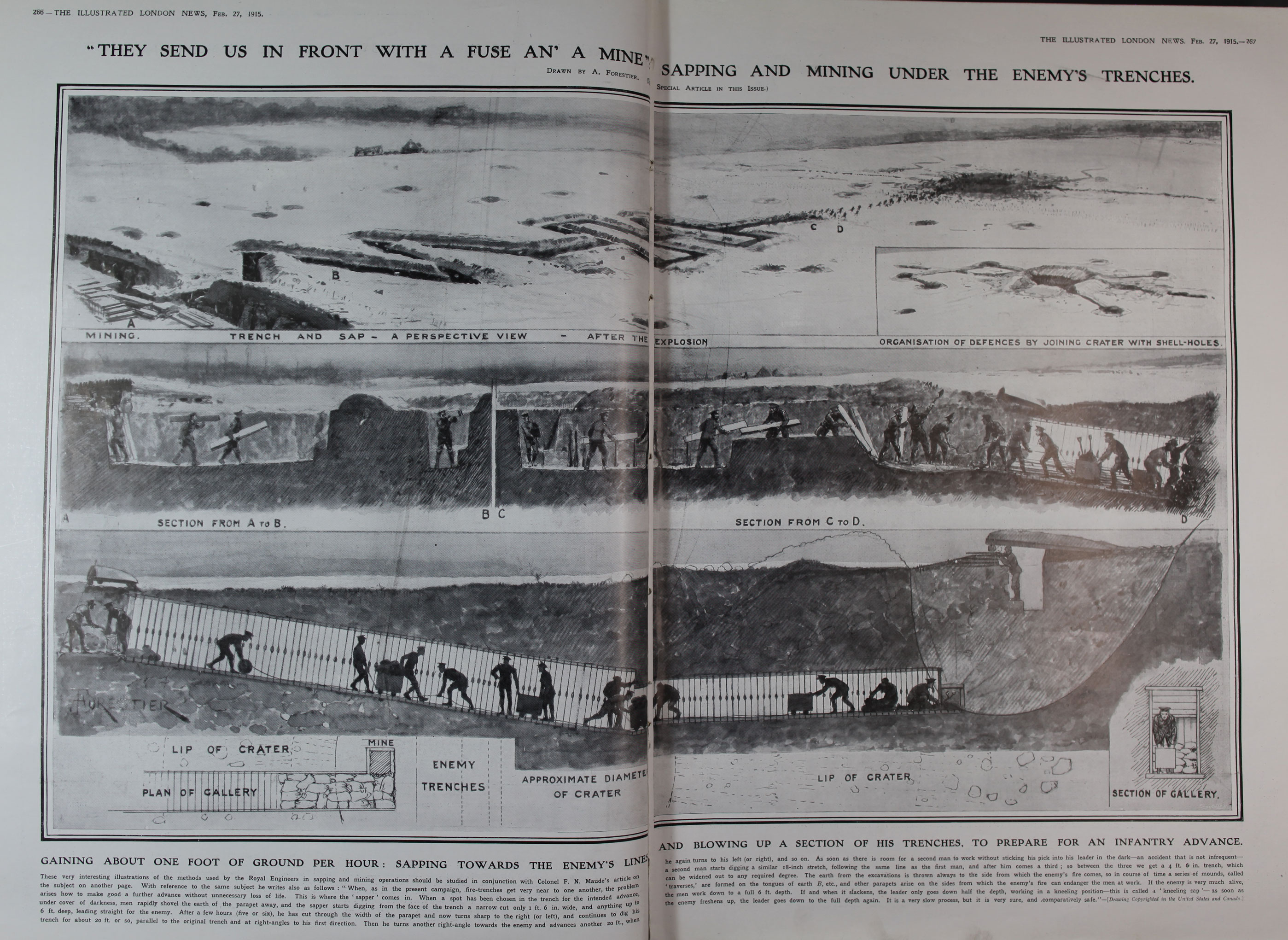 Article with drawings from the Illustrated London News entitled: ‘They send us in front with a fuse an’ a mine’ sapping and mining under the enemy’s trenches’, 27 February 1915, (Catalogue ref: ZPER 34/146)

‘They send us in front with a fuse an’ a mine’ sapping and mining under the enemy’s trenches.

Drawn by A. Forestier. (Special Article in this Issue)

Mining. Trench and Sap – A perspective view. – After the Explosion. Organisation of defences by joining crater with shell-holes.

Gaining about one foot of ground per hour: sapping towards the enemy’s lines and blowing up a section of his trenches. To prepare for an infantry advance.

These very interesting illustrations of the methods used by the Royal Engineers in sapping and mining operations should be studied in conjunction with Colonel F.N. Maude’s article on the subject on another page. With reference to the same subject he writes also as follows: “When, as in the present campaign, fire-trenches get very near to one another, the problem arises how to make good a further advance without unnecessary loss of life. This is where the ‘sapper’ comes in. When a spot has been chosen in the trench for the intended advance, under cover of darkness, men rapidly shovel the earth of the parapet away, and the sapper starts digging from the face of the trench a narrow cut only 1 foot 6 inches wide, and anything up to 6 feet deep, leading straight for the enemy. After a few hours (five or six) he has cut through the width of the parapet and now turns sharp to the right (or left), and continues to dig his trench for about 20 feet or so, parallel to the original trench and at right-angles to his first direction. Then he turns another right-angle towards the enemy and advances another 20 feet, when he again turns to his left (or right), and so on. As soon as there is room for a second man to work without sticking his pick into his leader in the dark – an accident that is not infrequent – a second man starts digging a similar 18-inch stretch, following the same line as the first man, and after him comes a third; so between the three we get a 4 foot 6 inch trench, which can be widened out to any required degree. The earth from the excavations is thrown always to the side from which the enemy’s fire comes, so in course of time a series of mounds, called ‘traverses,’ are formed on the tongues of earth B, etc., and other parapets arise on the sides from which the enemy’s fire can endanger the men at work. If the enemy is very much alive, the men work down to a full 6 feet in depth. If and when it slackens, the leader only goes down half the depth, working in a kneeling position – this is called a ‘kneeling sap’ – as soon as the enemy freshens up, the leader goes down to the full depth again. It is a very slow process, but it is very sure, and comparatively safe.’ [drawing copyrighted in the United States and Canada.]