This is a petitioning letter written on behalf of Robert Brown by his former master to the Home Secretary, Lord John Russell, 30 July 1838. Robert Brown was a Jamaican boy convicted of stealing two pairs of sailor’s trousers and sentenced to two months imprisonment, Catalogue ref: HO 17/121/54 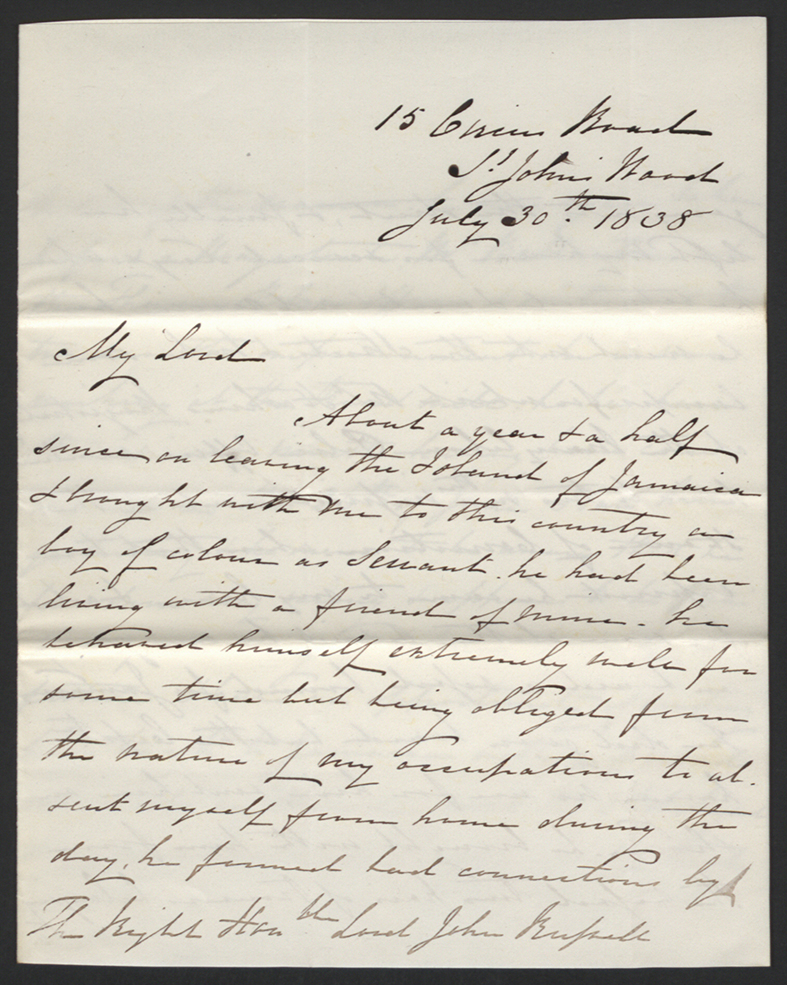 About a year & a half since on leaving the Island of Jamaica & having had with me to this country, a boy of colour as servant, he had been living with a friend of mine – behaved himself extremely well for some time but being obliged from the nature of my occupation to absent myself from home during the day, he formed bad connection

going into the street, & finally he left my house for several days. When he returned, I would not receive him. He went into the streets & took some lamps for which [William] Horkins, Magistrate at the Marylebone Police Office, sentenced him to two months imprisonment in the House of Correction [prison]. When that time expired, he came to my house & asked for some clothes & said he was going on board a vessel bound for Jamaica. He did go on board but the Captain having no room for him sent him on shore. He brought with him from the vessel two pairs of trousers belonging to one of the seamen. He was again taken before a Magistrate [William] Ballantine at the Thames Police Office, & sentenced to two months imprisonment. He is now working at the thread mill. [Cotton factory]. He had been there now a month having been committed on the 26th of June. I saw him yesterday & he seems to be aware that he has done very wrong & appears to be penitent, promising to behave himself in the future. I have an opportunity of sending him back to Jamaica with a friend who sails on Thursday next the 2nd of August & if your Lordship should think it a proper case in which to interfere & would give the necessary orders for his enlargement [discharge] he would be taken direct from the prison on board the vessel lying at the West India Docks. He is quite willing to go, & William Ballantine the Magistrate who committed him & with whom I have spoken agrees entirely with my idea on the subject & wished me to say so to your Lordship – the boys’ name is Robert Brown.