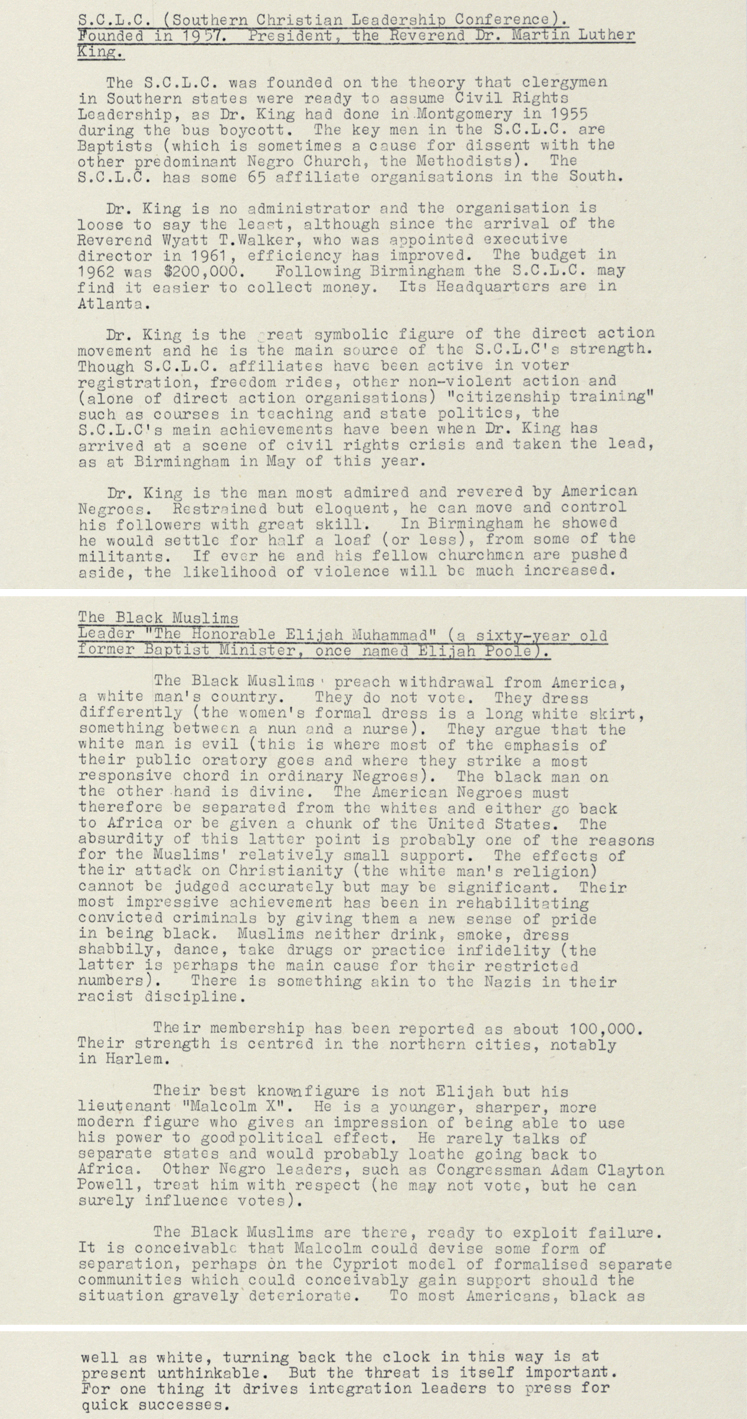 The S.C.L.C. was founded on the theory that clergymen in Southern states were ready to assume Civil Rights Leadership, as Dr. King had done in Montgomery in 1955 during the bus boycott. The key men in the S.C.L.C. are Baptists (which is sometimes a cause for dissent with the other predominant Negro Church, the Methodists). The S.C.L.C. has some 65 affiliate organisations in the South.

Dr. King is no administrator and the organisation is loose to say the least, although since the arrival of the Reverend Wyatt T. Walker, who was appointed executive director in 1961, efficiency has improved. The budget in 1962 was $200,000. Following Birmingham the S.C.L.C. may find it easier to collect money. Its Headquarters are in Atlanta.

Dr. King is the great symbolic figure of the direct action movement and he is the main source of the S.C.L.C’s strength. Though S.C.L.C. affiliates have been active in voter registration, freedom rides, other non-violent action and (alone of direct action organisations) “citizenship training” such as courses in teaching and state politics, the S.C.L.C’s main achievements have been when Dr. King has arrived at a scene of civil rights crisis and taken the lead, as at Birmingham in May of this year.

Dr. King is the man most admired and revered by American Negroes. Restrained but eloquent, he can move and control his followers with great skill. In Birmingham he showed he would settle for half a loaf (or less), from some of the militants. If ever he and his fellow churchmen are pushed aside, the likelihood of violence will be much increased.

The Black Muslims preach withdrawal from America, a white man’s country. They do not vote. They dress differently (the women’s formal dress is a long white skirt, something between a nun and a nurse). They argue that the white man is evil (this is where most of the emphasis of their public oratory goes and where they strike a most responsive chord in ordinary Negroes). The black man on the other hand is divine. The American Negroes must therefore be separated from the whites and either go back to Africa or be given a chunk of the United States. The absurdity of this latter point is probably one of the reasons for the Muslims relatively small support. The effects of their attack on Christianity (the white man’s religion) cannot be judged accurately but may be significant. Their most impressive achievement has been in rehabilitating convicted criminals by giving them a new sense of pride in being black. Muslims neither drink, smoke, dress shabbily, dance, take drugs or practice infidelity (the latter is perhaps the main cause for their restricted numbers). There is something akin to the Nazis in their racist discipline.

Their membership has been reported as about 100,000.
Their strength is centred in the northern cities, notably in Harlem.

Their best known figure is not Elijah but his lieutenant “Malcolm X”. He is a younger, sharper, more modern figure who gives an impression of being able to use his power to good political effect. He rarely talks of separate states and would probably loathe going back to Africa. Other Negro leaders, such as Congressman Adam Clayton Powell, treat him with respect (he may not vote, but he can surely influence votes).

The Black Muslims are there, ready to exploit failure. It is conceivable that Malcolm could devise some form of separation, perhaps on the Cypriot model of formalised separate communities which could conceivably gain support should the situation gravely deteriorate. To most Americans, black as well as white, turning back the clock in this way is at present unthinkable. But the threat is itself important. For one thing it drives integration leaders to press for quick successes.