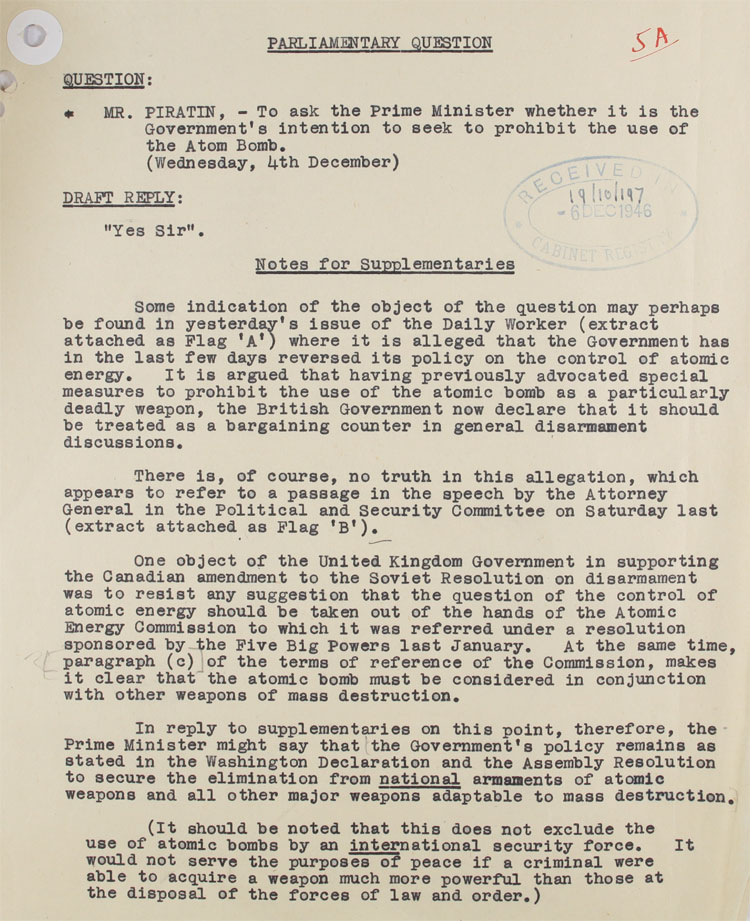 QUESTION
MR.PIRATIN, – To ask the Prime Minister whether it is the Government’s intention to seek to prohibit the use of the Atom Bomb. (Wednesday, 4th December)

Some indication of the subject of the question may perhaps be found in yesterday’s issue of the Daily Worker (extract attached as Flag ‘A’) where it is alleged that the Government has in the last few days reversed its policy on the control of atomic energy. It is argued that having previously advocated special measures to prohibit the use of the atomic bomb as a particularly deadly weapon, the British Government now declare that it should be treated as a bargaining counter in general disarmament discussions.

There is, of course, no truth in this allegation, which appears to refer to a passage in the speech by the Attorney General in the Political and Security Committee on Saturday last (extract attached as Flag ‘B’).

One object of the United Kingdom Government in supporting the Canadian amendment to the Soviet Resolution on disarmament was to resist any suggestion that the question of the control of atomic energy should be taken out of the hands of the Atomic Energy Commission to which it was referred under a resolution sponsored by the Five Big Powers last January. At the same time, paragraph (c) of the terms of reference of the Commission, makes it clear that the atomic bomb must be considered in conjunction with other weapons of mass destruction.

(It should be noted that this does not exclude the use of atomic bombs by an international security force. It would not serve the purposes of peace if a criminal were able to acquire a weapon much more powerful than those at the disposal of the forces of law and order.)