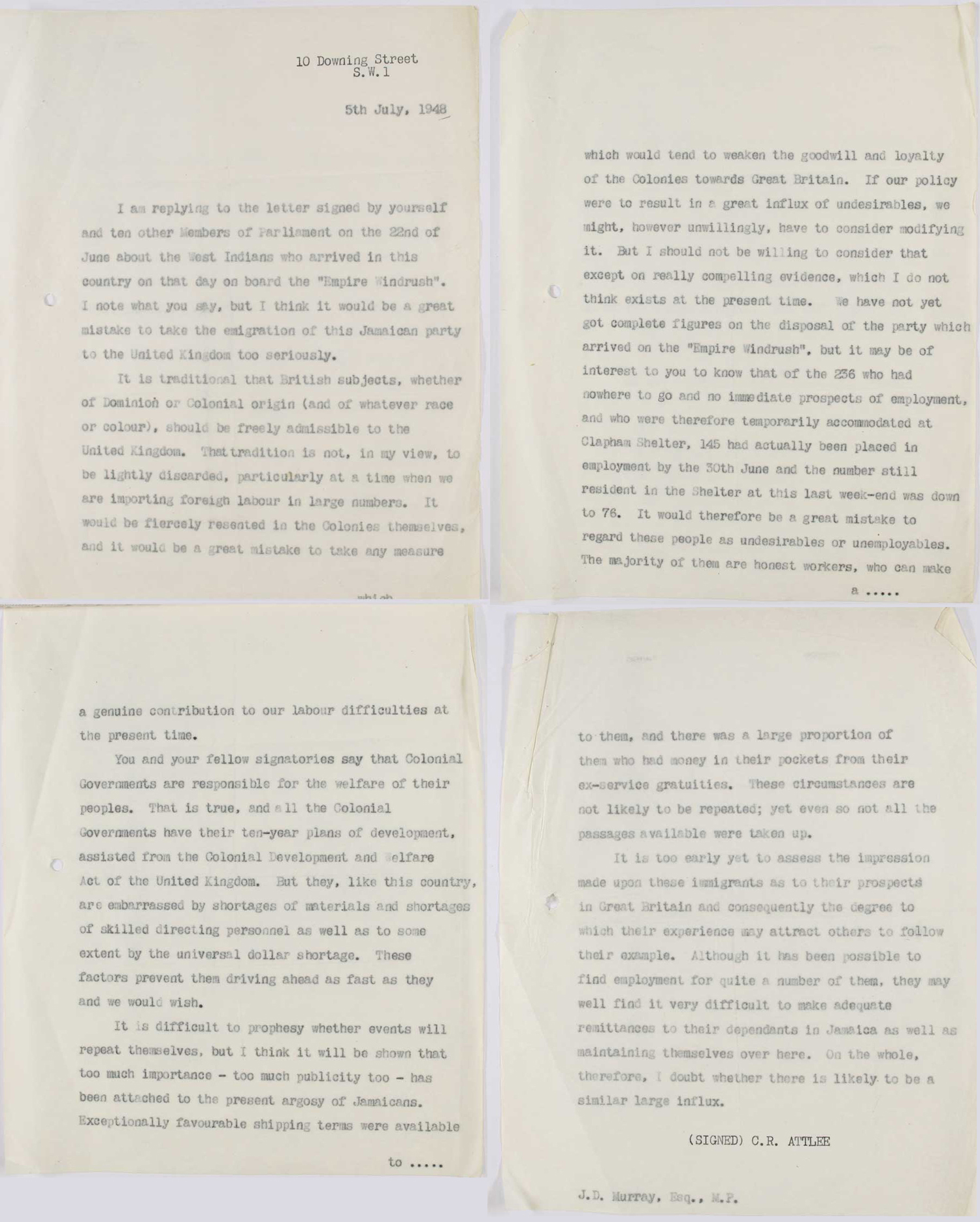 I am replying to the letter signed by yourself and ten other Members of Parliament on the 22nd of June about the West Indians who arrived in this country on that day on board the “Empire Windrush”.  I note what you say, but I think it would be a great mistake to take the emigration of this Jamaican party to the United Kingdom too seriously.

It is traditional that British subjects, whether of Dominion or Colonial origin (and of whatever race or colour), should be freely admissible to the United Kingdom. That tradition is not, in my view, to be lightly discarded, particularly at this time when we are importing foreign labour in large numbers. It would be fiercely resented in the Colonies themselves, and it would be a great mistake to take any measure which would tend to weaken the goodwill and loyalty of the Colonies towards Great Britain. If our policy were to result in a great influx of undesirables, we might, however unwillingly, have to consider modifying it. But I should not be willing to consider that except on really compelling evidence, which I do not think exists at the present time. We have not yet got complete figures on the disposal of the party which arrived on the “Empire Windrush”, but it may be of interest to you to know that of the 236 who had nowhere to go and no immediate prospects of employment, and who were therefore temporarily accommodated at Clapham Shelter, 145 had actually been placed in employment by the 30th June and the number still resident in the Shelter at this last week-end was down to 76. It would therefore be a great mistake to regard these people as undesirable or unemployables. The majority of them are honest workers, who can make a genuine contribution to our labour difficulties at the present time.

You and your fellow signatories say that Colonial Governments are responsible for the welfare of their peoples. That is true, and all the Colonial Governments have their ten-year plans of development, assisted from the Colonial Development and Welfare Act of the United Kingdom. But they, like this country, are embarrassed by shortages of skilled directing personnel as well as to some extent the universal dollar shortage. These factors prevent them driving ahead as fast as they and we would wish.

It is difficult to prophesy whether events will repeat themselves, but I think it will be shown that too much importance – too much publicity too – has been attached to the present argosy of Jamaicans. Exceptionally favourable shipping terms were available to them, and there was a large proportion of them who had money in their pockets from ex-service gratuities. These circumstances are not likely to be repeated; yet even so not all the passages available were taken up.

It is too early yet to assess the impression made upon these immigrants as to their prospects in Great Britain and consequently the degree to which their experience may attract others to follow their example. Although it has been possible to find employment for quite a number of them, they may well find it very difficult to make adequate remittance to their dependants in Jamaica as well as maintaining themselves over here. On the whole, therefore, I doubt whether there is likely to be a similar large influx.