Extract from a document concerning the recruitment of students and staff from Commonwealth countries at the time of the Common Immigrants Bill, 1962, Catalogue ref:  MH 55/2789

Recruitment from the Commonwealth and colonies in the 1950s and 1960s was important to deal with the shortage of nurses and hospital domestics to work in the new National Health Service. Each colony or member of the Commonwealth assessed candidates from the educational and health perspectives and then reported to a panel which included the Colonial Office (Commonwealth Office in 1966) and the Ministry of Health. 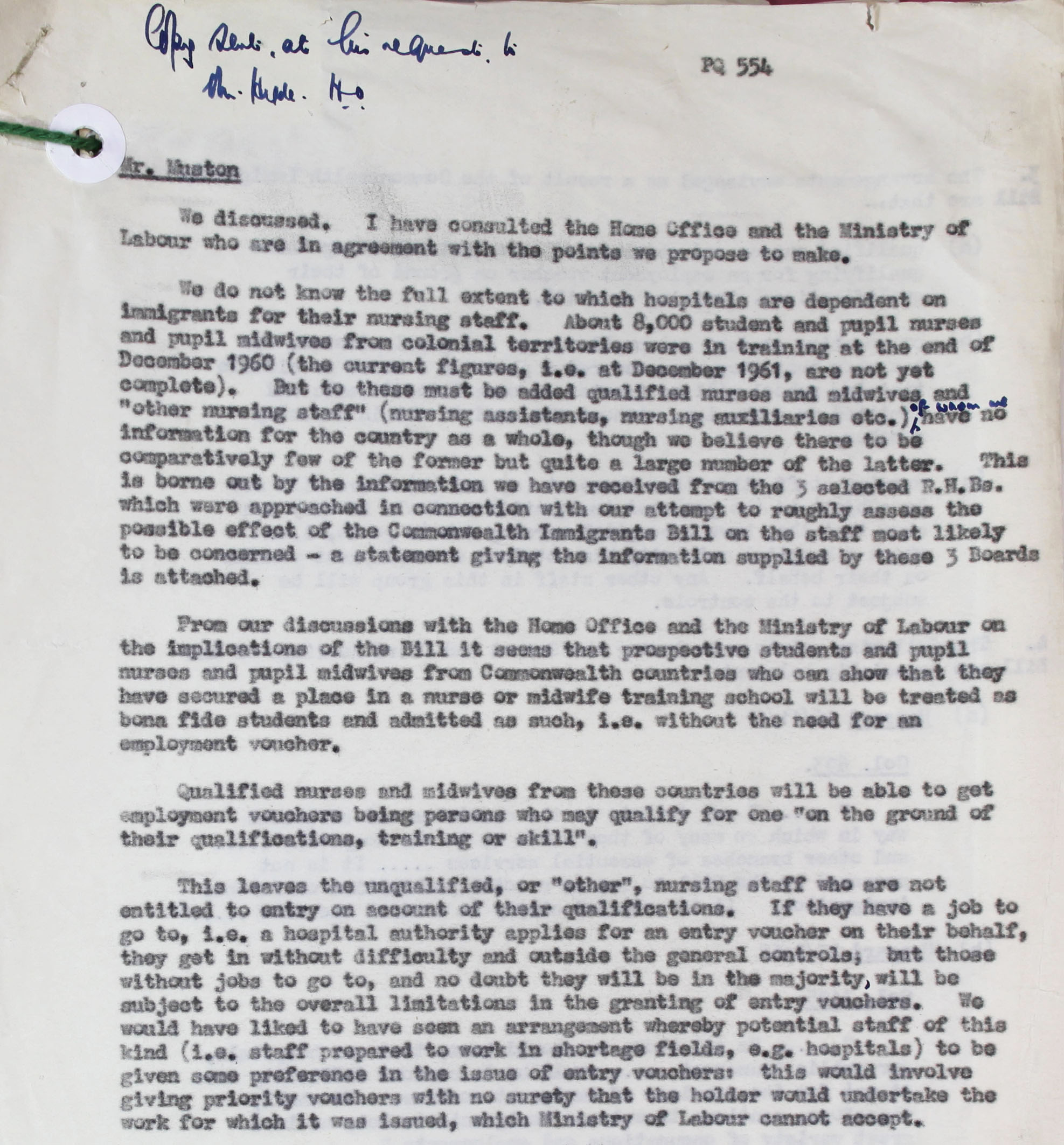 We discussed. I have consulted the Home Office and the Ministry of Labour who are in agreement with the points we propose to make.

We do not know the full extent to which hospitals are dependent on immigrants for their nursing staff. About 8,000 students and pupil nurses and pupil midwives from colonial territories were in training at the end of December 1960 (the current figures, i.e. at December 1961, are not yet complete). But to these must be added qualified nurses and midwives and “other nursing staff” (nursing assistants, nursing auxiliaries etc.) of whom we have no information for the country as a whole, although we believe there to be comparatively few of the former but quite a large number of the latter. This is borne out by the information we have received from the 3 selected R.H.B.s [Regional Hospital Boards] which were approached in connection with our attempt to roughly assess the possible effect of the Commonwealth Immigrants Bill on the staff most likely to be concerned-as a statement giving the information supplied by these 3 boards is attached.

From our discussions with the Home Office and the Ministry of Labour on the implications of the Bill it seems that prospective students and pupils nurses and pupil midwives from Commonwealth countries who can show that they have secured a place in a nurse or midwife training school will be treated as bone fide [genuine] students and admitted as such, i.e. without the need for an employment voucher.

Qualified nurses and midwives from these countries will be able to get employment vouchers being persons who may qualify for one “on the ground of their qualifications, training or skill”.

This leaves the unqualified, or “other”, nursing staff who are not entitled to entry on account of their qualifications. If they have a job to go to, i.e. a hospital authority applies for an entry number on their behalf, they get in without difficulty and outside the general controls; but those without jobs to go to, and no doubt they will be in the majority, will be subject to the overall limitations in the granting of entry vouchers. We would have liked to have seen an arrangement whereby potential staff of this kind (i.e. staff prepared to work in shortage fields, e.g. hospitals) to be given some preference in the issue of entry vouchers: this would involve giving priority vouchers with no surety [guarantee] that the holder would undertake the work for which it was issued, which the Ministry of Labour cannot accept.