Once British Always British is a collection of three 30-minute audio dramas that are the result of a collaboration between The National Archives and Tamasha Theatre Company and explore the migration of Yemeni, Indian and Caribbean sailors to British ports during the 1920s. Each story is inspired by material researched during a writing residency at The National Archives.

These plays look at an aspect of the post-First World War world when countries sought to count the cost while finding ways to rebuild. The plays are written by three outstanding playwrights, Satinder Chohan, Hassan Abdulrazzak and Mel Pennant, whose research at The National Archives has produced three immersive dramas that will leave audiences captivated.

The Fireman by Hassan Adbulrazzak

When Sahar’s grandmother Rose asks her to investigate the truth about her Yemeni father Ali Abdul, Sahar finds herself on a train to London just as the first wave of the coronavirus pandemic is taking hold. With a nationwide shortage of her bipolar medication, Sahar arrives at The National Archives in a confused state, with the institution about to close in response to a national lockdown.

After months of abuse at sea on board a merchant navy vessel, ‘fireman’ Buhur – one of the many Indian men employed to shovel coal into the ship’s furnace below decks – illegally jumps ship in 1920s Liverpool. Befriended by a landlady of a local lodging house, he soon finds his feet in this strange new land, and an unexpected romance at odds with the longing letters from his wife back in Karachi.

A Stranger in a Strange Place by Mel Pennant

The main focus of this drama is Claudius and May Smart. Claudius has worked hard all his life, but now all doors to employment have been closed on him. His crime? Falling in love with a British white woman. Hurt and betrayed in an openly racist Britain and facing zero employment prospects and hungry stomachs, Claudius’ only choice and wish is for repatriation back to his native land of Jamaica for him, May and their young son. But will his request be granted?

The below Q&A sessions feature Iqbal Singh of The National Archives in conversation with Tamasha Theatre’s Fin Kennedy and the playwrights Hassan Abdulrazzak and Satinder Chohan. They were recorded live following public listening events on the 29th April and 4th May 2021. 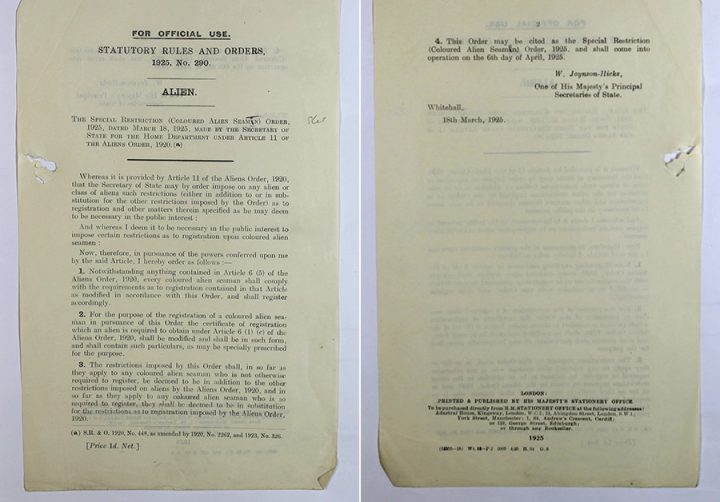 Once British Always British: Stories of Indian and Yemeni sailors in Britain in the 1920s

In April and May this year The National Archives will be launching two new audio plays as part of the project ‘Once British Always British’, based on a writing residency at the archives.

The plays are written by two outstanding playwrights, Satinder Chohan and Hassan Abdulrazzak, and explore the migration of Yemeni and Indian sailors to British ports during the 1920s. They look at an aspect of the post-First World War world when countries sought to count the cost while finding ways to rebuild.

There is a compelling story of how men from India and other colonies served the needs of merchant shipping as the invaluable ‘muscles of empire’, the unskilled manual labour, that fuelled the furnaces and made it possible for steamships to traverse the seas. It was these same men who were caught out by racially motivated changes in policy and legislation from the earlier part of the 20th century that excluded non-white labour from British ports.

If you would like to know more about the approach that Outreach has been developing to use drama to widen and deepen our understanding of the past, please view the following presentation from Iqbal Singh from 3.45.24 (clips are time marked in the section ‘show more’).